Published in: The Desert Sun 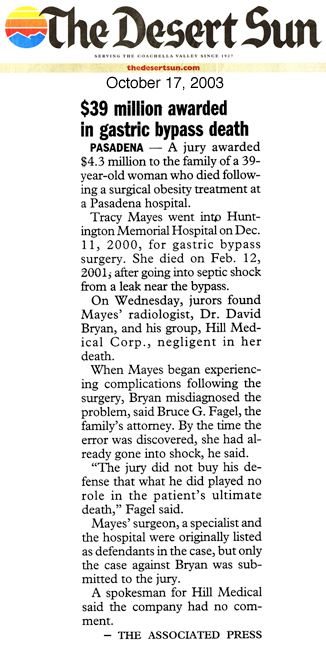 PASADENA — A jury awarded $4.3 million to the family of a 39-year-old woman who died following a surgical obesity treatment at a Pasadena hospital.

Tracy Mayes went into Huntington Memorial Hospital on Dec. 11, 2000, for gastric bypass surgery. She died on Feb. 12, 2001, after going into septic shock from a leak near the bypass.

When Mayes began experiencing complications following the surgery, Bryan misdiagnosed the problem, said Bruce G. Fagel, the family’s attorney. By the time the error was discovered, she had already gone into shock, he said.

“The jury did not buy his defense that what he did played no role in the patient’s ultimate death,” Fagel said.

Mayes’ surgeon, a specialist and the hospital were originally listed as defendants in the case, but only the case against Bryan was submitted to the jury.

A spokesman for Hill Medical said the company had no comment. — THE ASSOCIATED PRESS