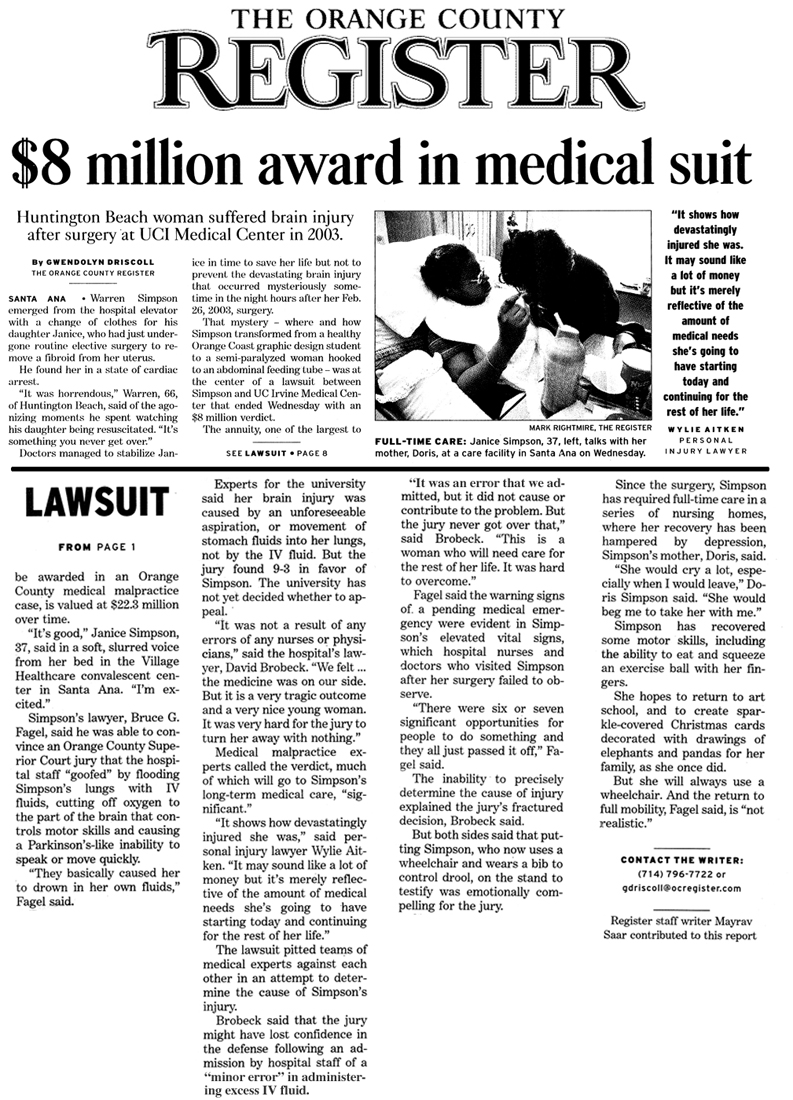 [PULL QUOTE]: “It shows how devastatingly injured she was. It may sound like a lot of money but it’s merely reflective of the amount of medical needs she’s going to have starting today and continuing for the rest of her life.” WYLIE AITKEN PERSONAL INJURY LAWYER

SANTA ANA • Warren Simpson emerged from the hospital elevator with a change of clothes for his daughter Janice, who had just undergone routine elective surgery to remove a fibroid from her uterus.

He found her in a state of cardiac arrest.

“It was horrendous,” Warren, 66, of Huntington Beach, said of the agonizing moments he spent watching his daughter being resuscitated. “It’s something you never get over.”

Doctors managed to stabilize Janice in time to save her life but not to prevent the devastating brain injury that occurred mysteriously sometime in the night hours after her Feb. 26, 2003, surgery.

That mystery — where and how Simpson transformed from a healthy Orange Coast graphic design student to a semi-paralyzed woman hooked to an abdominal feeding tube — was at the center of a lawsuit between Simpson and UC Irvine Medical Center that ended Wednesday with an $8 million verdict.

The annuity, one of the largest to be awarded in an Orange County medical malpractice case, is valued at $22.3 million over time.

The annuity, one of the largest to be awarded in an Orange County medical malpractice case, is valued at $22.3 million over time. “It’s good,” Janice Simpson, 37, said in a soft, slurred voice from her bed in the Village Healthcare convalescent center in Santa Ana. “I’m excited.”

“They basically caused her to drown in her own fluids,” Fagel said. Experts for the university said her brain injury was caused by an unforeseeable aspiration, or movement of stomach fluids into her lungs, not by the IV fluid. But the jury found 9-3 in favor of Simpson. The university has not yet decided whether to appeal.

“It was not a result of any errors of any nurses or physicians,” said the hospital’s lawyer, David Brobeck. “We felt … the medicine was on our side. But it is a very tragic outcome and a very nice young woman. It was very hard for the jury to turn her away with nothing.”

“It shows how devastatingly injured she was,” said personal injury lawyer Wylie Aitken. “It may sound like a lot of money but it’s merely reflective of the amount of medical needs she’s going to have starting today and continuing for the rest of her life.”

The lawsuit pitted teams of medical experts against each other in an attempt to determine the cause of Simpson injury.

Brobeck said that the jury might have lost confidence in the defense following an admission by hospital staff of a “minor error” in administering excess IV fluid.

“It was an error that we admitted, but it did not cause or contribute to the problem. But the jury never got over that,” said Brobeck. “This is a woman who will need care for the rest of her life. It was hard to overcome.”

Fagel said the warning signs of a pending medical emergency were evident in Simpson’s elevated vital signs, which hospital nurses and doctors who visited Simpson after her surgery failed to observe.

“There were six or seven significant opportunities for people to do something and they all just passed it off,” Fagel said.

The inability to precisely determine the cause of injury explained the jury’s fractured decision, Brobeck said.

But both sides said that putting Simpson, who now uses a wheelchair and wears a bib to control drool, on the stand to testify was emotionally compelling for the jury.

Since the surgery, Simpson has required full-time care in a series of nursing homes, where her recovery has been hampered by depression, Simpson’s mother, Doris, said.

“She would cry a lot, especially when I would leave,” Doris Simpson said. “She would beg me to take her with me.”

Simpson has recovered some motor skills, including the ability to eat and squeeze an exercise ball with her fingers.

She hopes to return to art school, and to create sparkle-covered Christmas cards decorated with drawings of elephants and pandas for her family, as she once did.

But she will always use a wheelchair. And the return to full mobility, Fagel said, is “not realistic.”