A Tale of Two Tragedies 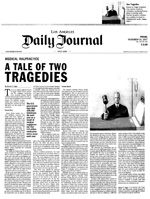 A Tale of Two Tragedies

The recent, highly publicized death of rapper Kanye West’s mother and the negligent medication error involving Dennis Quaid’s newborn twins provide insights into the nature of medical negligence cases in today’s society. For different reasons, neither case is likely to result in any litigation, and they certainly will never see the inside of a courtroom.

Kanye West’s mother was a very intelligent consumer who would have been expected to understand that any surgery carries some risks, but she relied on her doctor to protect her. The surgeon, Jan Adams, has taken the highly unusual action of publicly announcing his innocence. We may never know the truth, unless the California Medical Board decides to investigate this case independently. The board has the authority, because an accusation is pending against Adams based on several driving-under-theinfluence arrests. The board can amend its accusation against Adams to include a charge based on the death of Donda West, but it would need at least two medical experts to conclude that Adams’ actions regarding her constituted gross negligence.

The California Medical Board usually becomes involved in investigating physicians after it receives a report of a settlement in a civil case, and such an investigation usually occurs several years after the incident. Although parties can file a complaint directly against a physician, these complaints usually involve allegations of drug abuse or sexual encounters. The current Medical Board accusation against Adams is based on his prior DUI arrests, rather than his earlier medical-malpractice settlements and judgments.

In one of the more bizarre ironies, Adams recently appeared in court at a debtor’s hearing involving an unpaid judgment from a medical-malpractice case from several years ago. Adams claims that his medical-malpractice insurance had lapsed because of his failure to pay premiums on time. This prior case involved a foreign-body sponge, and if Adams had insurance coverage, his carrier certainly would have paid such a claim long ago.

This lack of insurance coverage is one reason why a civil complaint may not be filed in the Donda West case. In addition, California law limits recovery of noneconomic damages in a wrongful-death claim against a physician to $250,000. Absent any economic loss by Kanye West because of the death of his mother, a claim solely for noneconomic damages probably would not be worth the continuing publicity of such a claim.

Although Adams may escape being held responsible for Donda West’s death in a civil lawsuit, and the Medical Board may not take further action against his medical license based on this death, this case has demonstrated again that patients need to know more about their doctors before undergoing any surgery, especially elective surgery. Even though Adams hosted the Discovery Channel’s “Plastic Surgery: Before & After,” he was not board-certified. Although he may have taken post-degree training in surgery, or even completed an approved residency program, he did not pass the examination process required by the American Board of Plastic Surgery.

The Los Angeles County coroner announced that the autopsy on Donda West did not reveal a cause of death and that the results of drug testing will take several weeks. Because she likely was given narcotic medication for post-operative pain, testing for the level of medication at the time of death will be essential to determine a legal cause of death.

From a medical perspective, the most likely explanation for her death relates to the lack of adequate post-surgery management. The most dangerous time for any patient who undergoes surgery is the first 24-to-48 hours after the surgery, as a result of the effects of anesthesia and events that take place during the operation. Because West went directly home after surgery, that was when she was at greatest risk.

The West case should be pursued through a medical-malpractice claim, but not for any monetary benefit. Rather, the suit should be undertaken to provide answers for the benefit of the public as consumers of medical care. In any case that results in legal action, the potential defendant should never sit down for an interview with the press.

Adams’ interview suggests that he is gambling on the proposition that Kanye West will not follow through with a lawsuit and that the California Medical Board will focus on his DUI arrests rather than this death.

The situation involving Dennis Quaid’s twin babies is far more common than postsurgical deaths. The U.S. government says that 100,000 Americans die each year as a result of medical negligence but that 1.5 million medication errors occur each year. On average, every patient who enters a U.S. hospital has at least one medication error during his or her hospitalization, and many have multiple medication errors. Fortunately, the majority of these patients never suffer a significant injury from these medication errors, and most patients never even learn that they occurred.

An error involving an intravenous injection of Heparin represents a fairly common type of medication error. Heparin is an anti-coagulant, which, in the strength of 10,000 units per milliliter of fluid, is used to dissolve blood clots. However, in a strength of 10 units per milliliter, it is used to keep intravenous lines from clotting. It was for this more innocuous purpose that the Heparin was used for Dennis Quaid’s children.

Because both bottles of Heparin look similar in size, shape and name, the only difference is the concentration of the drug, which is printed on the label. This requires the nurse to read the label before drawing the fluid into a syringe. However, many nurses take shortcuts, and they sometimes skip the step of reading the label.

When Heparin, in a strength of 10,000 units per milliliter, is given to a newborn, the results can be devastating. If the baby has any underlying condition that could cause bleeding, such as prematurity (which increases the risk of an intraventricular brain hemorrhage) or prior surgery (which causes bleeding at the surgical site), high-dose Heparin will increase the risk of such bleeding substantially. Premature infants, especially those delivered after less than 34 weeks of gestation, face a risk of bleeding into the brain.

When a bleed occurs, it is graded for severity, with Grade I bleeds producing few longterm consequences and Grade IV producing serious consequences that may cause lifelong disabilities. Although there are no clinical studies on the subject, if a newborn with a Grade I brain bleed is given high-dose Heparin, which prevents clotting, the risk of the bleed progressing to a Grade III or Grade IV certainly would increase. In the statement released by Cedars-Sinai Medical Center, reference was made to blood tests showing normal clotting time, but the only way to determine whether the medication error had a clinical effect would be ultrasound exams of the babies’ brains. Even with normal clotting studies, each affected baby would require serial ultrasound exams to determine whether any bleeding in the brain occurred. If those exams reveal nothing abnormal, each baby would require careful follow-up, although the risk of an effect from such a medication error would decrease over time. Although that risk may be small at this time, it is too early to state definitively that there is no risk.

The statement by Cedars-Sinai was unusual, but it was highly appropriate, because it openly acknowledged the medication error and classified the error as preventable. All hospitals are required to have policies to prevent such errors, and Cedars-Sinai had one.

But no written policy can prevent a nurse from not reading a medication label. This was clearly a human error, but in a hospital, many human errors are preventable, and when they occur, they represent negligence. Cedars-Sinai’s early admission of a preventable error, is in sharp contrast to Adams’ denials of responsibility. The statement from the hospital was excellent public relations and probably was motivated by its belief that none of the children affected by this medication error will experience long-term consequences.

If neither of the children shows evidence of injury from this medication error, there is no basis for a tort claim, even with an admission of responsibility by the hospital. Because tort law follows the principle of “no harm, no foul,” evidence of an injury must precede the filing of any complaint. However, because the law recognizes that injuries to a child at birth may take time to show, in California, a child who suffers an injury before 3 has until his or her eighth birthday to bring a claim. Because CT scans or MRIs cannot predict specific clinical effects of brain bleeding, each child who was involved in this medication error will require some degree of long-term clinical follow-up, which may include neuropsychological testing at school age before any evidence of a specific injury may be identified.

Although any tort claim will depend on the identification of some injury, this medication error will be the subject of an immediate investigation by the California Department of Health. In response to a new law that went into effect on July 1, Cedars-Sinai Medical Center was required to report this medication error to the state for an investigation and corrective action. This report does not require any injury to a patient. Also, the California Nursing Board has the authority to investigate the nurse involved in the medication error. It also does not require an injury for such an investigation. Even though neither of these cases likely will result in a medical-malpractice claim, the public needs to know that the civil justice system is available to provide both truth and justice to victims of medical malpractice, whether they are celebrities or not.

Bruce G. Fagel is an attorney and a physician who represents injured patients in medical-malpractice cases against doctors and hospitals throughout California.