Are There Too Many Medical Malpractice Claims or Not Enough? 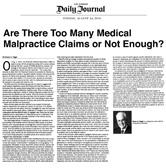 Are There Too Many Medical Malpractice Claims or Not Enough?

On Aug. 4, 2010, the American Medical Association (AMA) issued a survey of U.S. physicians along with a press release stating that their survey of 5,825 physicians showed “an average of 95 medical liability claims filed for every 100 physicians, almost one per physician.” The survey also referred to data from the Physician Insurers Association of America (a group of physician owned or operated liability carriers) that showed 65 percent of claims were dropped, dismissed, or withdrawn, 25.7 percent of claims were settled, 4.5 percent were decided by arbitration, and 5 percent were resolved by trial, with the defendant prevailing in 90 percent of the cases that went to trial.

The AMA and other tort reform groups use this data to suggest that most medical malpractice cases are frivolous and that they must be eliminated from the system before being filed in order to reduce costs of medical care or prevent defensive medicine costs.

What this data really shows is that a significant number of medical malpractice cases (the 25.7 percent that are settled) are not frivolous. While 65 percent are dropped, dismissed or withdrawn, that does not mean that the system is broken. In fact, these data prove that the system works well because most cases with merit are settled for payment of money and most of the rest are not pursued once the facts are discovered.

While criminal cases are often referred to as a search for the truth, medical malpractice civil cases are a search for the facts. In a criminal case, the police and the district attorney investigate the case and have the facts needed to prove guilt before a defendant is charged, but in a medical malpractice case the plaintiff victim of negligent care rarely has the facts needed to prove a case before it is filed and served on a defendant. The facts of the case are often not even contained in the medical records, which are authored by the defendant.

The trade organizations of physicians encourage their members to not put anything in the medical records that would reflect poorly on another doctor’s care. Insurance groups encourage their insured physicians and hospitals to specifically not put certain information into a patient’s medical record, since the patient can gain access to that record. Even when the medical records are readable (and despite efforts to use electronic medical records, many records are still handwritten) the information placed in the record rarely provides a complete picture of an adverse event or negligent care causing injury or death.

Most medical malpractice cases involve multiple physicians and nurses. While most nurses are employees of a hospital, an increasing number of nurses are actually “nursetravelers” employed by a nursing agency. This employment information is never part of the medical records, and the role and relationship of various nurses and doctors can never be identified in the medical records. Thus, medical malpractice cases often require naming multiple defendants and then bringing in additional defendants as the case progresses through discovery. After discovery identifies the relative roles and liability of various defendants, the fact that some defendants are dropped or dismissed from a case does not mean that the case was frivolous. The addition and elimination of defendants in a medical malpractice case proves how the system works to correctly identify liable defendants, while removing non-liable defendants from the case.

Plaintiffs must go through a lengthy and expensive system of taking depositions to gather the facts about complex interactions between patients and health care providers because that is the only way to find out what happened. The entire medical profession is very tight-lipped about explaining an adverse outcome to a patient or their family because they believe that such information will lead to a lawsuit, or they are just afraid to admit anything that could be used against them in court. Even though the American Hospital Association encourages its member hospitals to tell patients about any adverse event that causes injury or death, there is no mechanism of enforcement for such a recommendation, and even when a family is invited to a meeting to discuss an adverse event, the health care providers usually assure the family that the adverse event was not caused by any negligent care. There is no data to know whether such meetings lead to more or fewer lawsuits, but it is not uncommon for families to seek an attorney’s help to provide more answers than those given by the health care providers, or even to explain what they were told in language that they can understand.

Much of the confusion about whether negligent medical care caused an injury or death could be easily clarified if the hospital would release the results of their investigation. Every hospital in the United States is required under rules of the Joint Commission for the Accreditation of Healthcare Organizations to conduct a meeting to investigate any unexpected outcome or death. These meetings must be held regularly by a specific committee for each clinical department in the hospital. The findings are held as confidential and privileged, and are immune from legal discovery in every U.S. state.

California’s Evidence Code Section 1157 makes any meeting whose purpose is “evaluation and improvement of the quality of care,” completely immune from discovery.

This secrecy forces attorneys for the victims of medical malpractice to file a lawsuit and conduct discovery well beyond having the medical records reviewed by an expert just to find out what happened, and when the information obtained proves to be not sufficient to maintain a case of liability against specific defendants, that case is dropped or dismissed, as it should be. For the AMA and other tort-reform groups to assert that because 65 percent of medical malpractice claims are dropped or dismissed means that they should not have been filed in the first place is just wrong. Medical malpractice claims are often the only way to obtain such information because hospitals and doctors maintain a veil of secrecy over what happens in hospitals.

The secrecy that surrounds any investigation of adverse outcomes by hospitals was codified into law by state legislatures who were told by their physician and hospital organizations that only medical professionals were capable of understanding the events in hospitals and the medical impact on patients. But the doctors’ groups went on to claim that any such investigation would not be candid or honest if the results of such an investigation could be used in court. Without any documented evidence or proof for such an assertion, state governments have conceded the major role in protecting patient safety by allowing doctors and nurses to police themselves in the hospital setting.

If physicians and hospitals really wanted to reduce the number of medical malpractice claims being filed as lawsuits, they could provide the information to the patient or family about what happened. Then only those cases where negligence was clear would be filed in court. But that would require lifting the veil of secrecy over the hospital committees that investigate such cases. Until that happens, which is not very likely, physicians and hospitals should not complain about the number of medical malpractice claims, which often provide the only method for a patient or family to find out what really happened inside a hospital.