Asking the Jury for Pain-And-Suffering Damages, Including PTSD 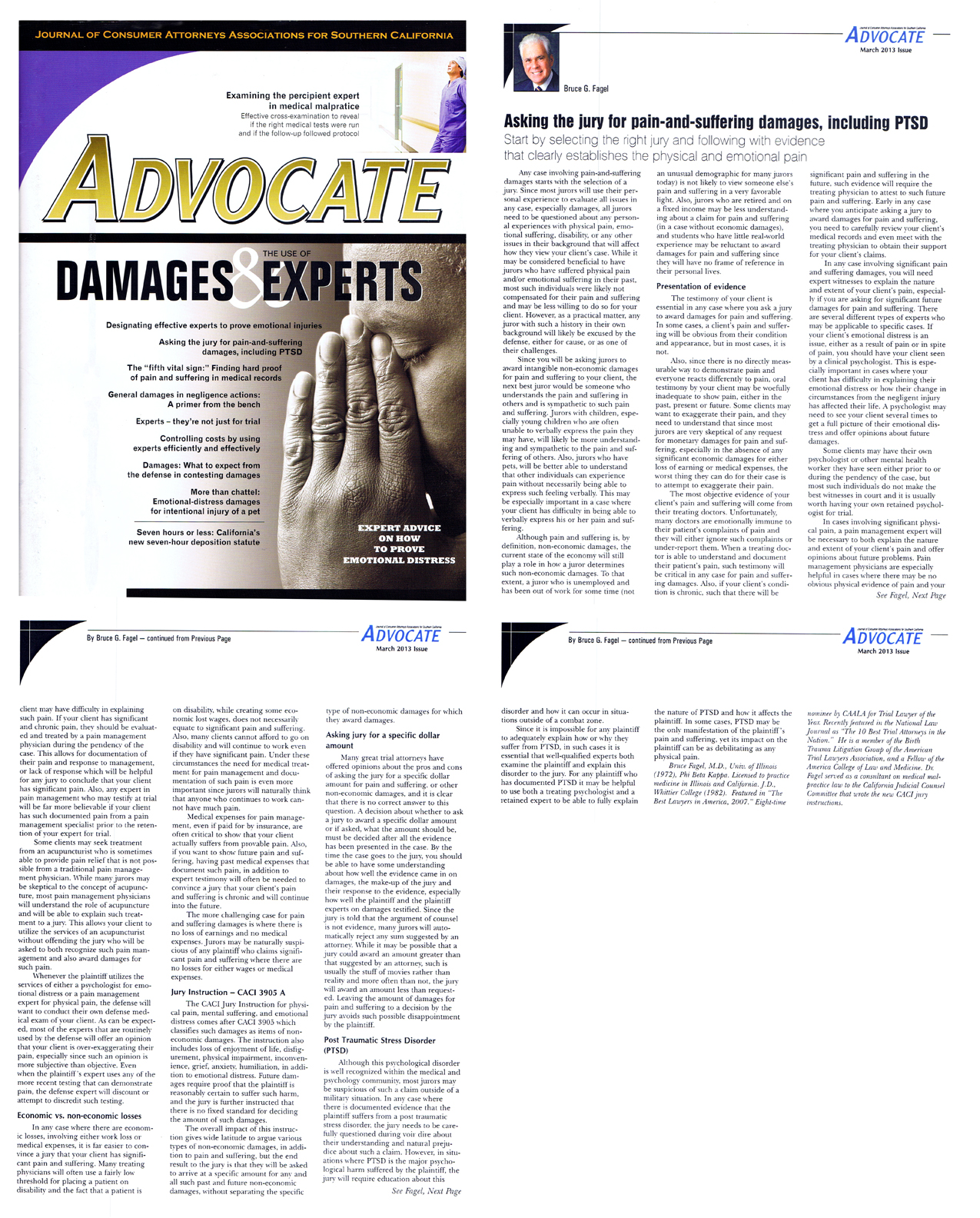 Start by selecting the right jury and following with evidence that clearly establishes the physical and emotional pain.

Any case involving pain-and-suffering damages starts with the selection of a jury. Since most jurors will use their personal experience to evaluate all issues in any case, especially damages, all jurors need to be questioned about any personal experiences with physical pain, emotional suffering, disability, or any other issues in their background that will affect how they view your client’s case. While it may be considered beneficial to have jurors who have suffered physical pain and/or emotional suffering in their past, most such individuals were likely not compensated for their pain and suffering and may be less willing to do so for your client. However, as a practical matter, any juror with such a history in their own background will likely be excused by the defense, either for cause, or as one of their challenges.

The testimony of your client is essential in any case where you ask a jury to award damages for pain and suffering. In some cases, a client’s pain and suffering will be obvious from their condition and appearance, but in most cases, it is not.

Also, since there is no directly measurable way to demonstrate pain and everyone reacts differently to pain, oral testimony by your client may be woefully inadequate to show pain, either in the past, present or future. Some clients may want to exaggerate their pain, and they need to understand that since most jurors are very skeptical of any request for monetary damages for pain and suffering, especially in the absence of any significant economic damages for either loss of earning or medical expenses, the worst thing they can do for their case is to attempt to exaggerate their pain.

In any case involving significant pain and suffering damages, you will need expert witnesses to explain the nature and extent of your client’s pain, especially if you are asking for significant future damages for pain and suffering. There are several different types of experts who may be applicable to specific cases. If your client’s emotional distress is an issue, either as a result of pain or in spite of pain, you should have your client seen by a clinical psychologist. This is especially important in cases where your client has difficulty in explaining their emotional distress or how their change in circumstances from the negligent injury has affected their life. A psychologist may need to see your client several times to get a full picture of their emotional distress and offer opinions about future damages.

Some clients may have their own psychologist or other mental health worker they have seen either prior to or during the pendency of the case, but most such individuals do not make the best witnesses in court and it is usually worth having your own retained psychologist for trial.

Whenever the plaintiff utilizes the services of either a psychologist for emotional distress or a pain management expert for physical pain, the defense will want to conduct their own defense medical exam of your client. As can be expected, most of the experts that are routinely used by the defense will offer an opinion that your client is over-exaggerating their pain, especially since such an opinion is more subjective than objective. Even when the plaintiff’s expert uses any of the more recent testing that can demonstrate pain, the defense expert will discount or attempt to discredit such testing.

In any case where there are economic losses, involving either work loss or medical expenses, it is far easier to convince a jury that your client has significant pain and suffering. Many treating physicians will often use a fairly low threshold for placing a patient on disability and the fact that a patient is on disability, while creating some economic lost wages, does not necessarily equate to significant pain and suffering. Also, many clients cannot afford to go on disability and will continue to work even if they have significant pain. Under these circumstances the need for medical treatment for pain management and documentation of such pain is even more important since jurors will naturally think that anyone who continues to work cannot have much pain.

Medical expenses for pain management, even if paid for by insurance, are often critical to show that your client actually suffers from provable pain. Also, if you want to show future pain and suffering, having past medical expenses that document such pain, in addition to expert testimony will often be needed to convince a jury that your client’s pain and suffering is chronic and will continue into the future.

The CACI Jury Instruction for physical pain, mental suffering, and emotional distress comes after CACI 3905 which classifies such damages as items of noneconomic damages. The instruction also includes loss of enjoyment of life, disfigurement, physical impairment, inconvenience, grief, anxiety, humiliation, in addition to emotional distress. Future damages require proof that the plaintiff is reasonably certain to suffer such harm, and the jury is further instructed that there is no fixed standard for deciding the amount of such damages.

The overall impact of this instruction gives wide latitude to argue various types of non- economic damages, in addition to pain and suffering, but the end result to the jury is that they will be asked to arrive at a specific amount for any and all such past and future non-economic damages, without separating the specific March 2013 Issue type of non-economic damages for which they award damages.

Many great trial attorneys have offered opinions about the pros and cons of asking the jury for a specific dollar amount for pain and suffering, or other non-economic damages, and it is clear that there is no correct answer to this question. A decision about whether to ask a jury to award a specific dollar amount or if asked, what the amount should be, must be decided after all the evidence has been presented in the case. By the time the case goes to the jury, you should be able to have some understanding about how well the evidence came in on damages, the make- up of the jury and their response to the evidence, especially how well the plaintiff and the plaintiff experts on damages testified. Since the jury is told that the argument of counsel is not evidence, many jurors will automatically reject any sum suggested by an attorney. While it may be possible that a jury could award an amount greater than that suggested by an attorney, such is usually the stuff of movies rather than reality and more often than not, the jury will award an amount less than requested. Leaving the amount of damages for pain and suffering to a decision by the jury avoids such possible disappointment by the plaintiff.

Although this psychological disorder is well recognized within the medical and psychology community, most jurors may be suspicious of such a claim outside of a military situation. In any case where there is documented evidence that the plaintiff suffers from a post-traumatic stress disorde1; the jury needs to be carefully questioned during voir dire about their understanding and natural prejudice about such a claim. However, in situations where PTSD is the major psychological harm suffered by the plaintiff, the jury will require education about this disorder and how it can occur in situations outside of a combat zone.

Since it is impossible for any plaintiff to adequately explain how or why they suffer from PTSD, in such cases it is essential that well-qualified experts both examine the plaintiff and explain this disorder to the jury. For any plaintiff who has documented PTSD it may be helpful to use both a treating psychologist and a retained expert to be able to fully explain the nature of PTSD and how it affects the plaintiff. In some cases, PTSD may be the only manifestation of the plaintiff’s pain and suffering, yet its impact on the plaintiff can be as debilitating as any physical pain.

Bruce G. Fagel, M.D., graduated from the Univ. of Ill. (1972), and was licensed to practice medicine: Illinois, 1973; California 1975. He received his JD at Whittier College (1982). Dr. Fagel is a regularly invited speaker before organizations of attorneys, physicians, and hospitals internationally, and has been interviewed by CBS, ABC, NBC and various media af iliates. Featured in “The Best Lawyers in America, 2007,” he has been an eight-time nominee by Consumer Attorneys Association for Trial Lawyer of the Year and recently featured in the National Law Journal as “The 10 Best Trial Attorneys in the Nation”. Dr. Fagel has authored various articles on medical-malpractice issues and served as a consultant on medical- malpractice law to the California Judicial Counsel Committee, which wrote the new CACI jury instructions (California Approved Civil Instructions).