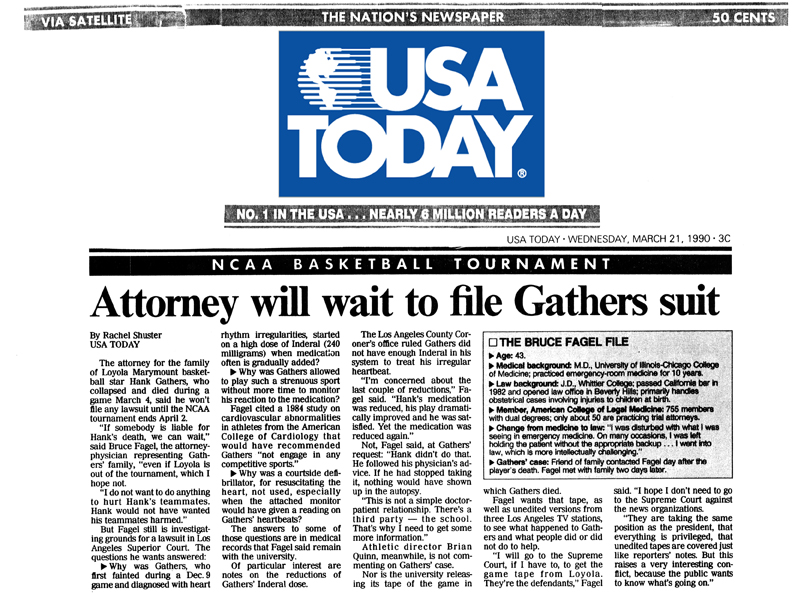 The attorney for the family of Loyola Marymount basketball star Hank Gathers, who collapsed and died during a game March 4, said he won’t file any lawsuit until the NCAA tournament ends April 2.

“If somebody is liable for Hank’s death, we can wait,” said Bruce Fagel, the attorney-physician representing Gathers’ family, “even if Loyola is out of the tournament, which I hope not.”

“I do not want to do anything to hurt Hank’s teammates. Hank would not have wanted his teammates harmed.”

But Fagel still is investigating grounds for a lawsuit in Los Angeles Superior Court. The questions he wants answered:

Why was Gathers, who first fainted during a Dec. 9 game and diagnosed with heart rhythm irregularities, started on a high dose of Inderal (240 milligrams) when medication often is gradually added?

• Why was Gathers allowed to play such a strenuous sport without more time to monitor his reactions to the medication?

Fagel cited a 1984 study on cardiovascular abnormalities in athletes from the American College of Cardiology that would have recommended Gathers “not engage in any competitive sports.”

• Why was a courtside defibrillator, for resuscitating the heart, not used, especially when the attached monitor would have given a reading on Gathers’ heartbeats?

The answers to some of those questions are in medical records that Fagel said remain with the university. Of particular interest are notes on the reductions of Gathers’ Inderal dose

The Los Angeles County Coroner’s office ruled Gathers did not have enough Inderal in his system to treat his irregular heartbeat.

Not, Fagel said, at Gathers’ request: “Hank didn’t do that. He followed his physician’s advice. If he had stopped taking it, nothing would have shown up in the autopsy.

“This is not a simple doctor-patient relationship. There’s a third party — the school. That’s why I need to get some more information.”

Athletic director Brian Quinn, meanwhile, is not commenting on Gathers’ case. Nor is the university releasing its tape of the game in which Gathers died. Fagel wants that tape, as well as unedited versions from three Los Angeles TV stations, to see what happened to Gathers and what people did or did not do to help.

“They are taking the same position as the president, that everything is privileged, that unedited tapes are covered just like reporters’ notes. But this raises a very interesting conflict, because the public wants to know what’s going on.”

• Member, American College of Legal Medicine: 755 members with dual degrees; only about 50 are practicing trial attorneys.

• Change from medicine to law: “I was disturbed with what I was seeing in emergency medicine. On many occasions, I was left holding the patient without the appropriate backup … I went into law, which is more intellectually challenging.”