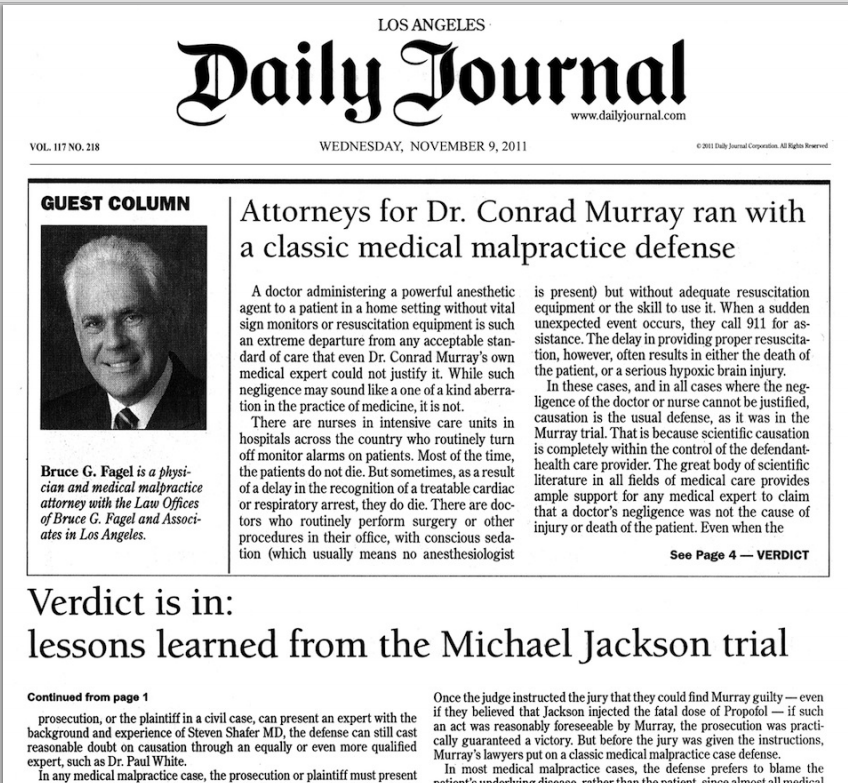 Verdict is in: lessons learned from the Michael Jackson trial.

A doctor administering a powerful anesthetic agent to a patient in a home setting without vital sign monitors or resuscitation equipment is such an extreme departure from any acceptable standard of care that even Dr. Conrad Murray’s own medical expert could not justify it. While such negligence may sound like a one of a kind aberration in the practice of medicine, it is not.

There are nurses in intensive care units in hospitals across the country who routinely turn off monitor alarms on patients. Most of the time, the patients do not die. But sometimes, as a result of a delay in the recognition of a treatable cardiac or respiratory arrest, they do die. There are doctors who routinely perform surgery or other procedures in their office, with conscious sedation (which usually means no anesthesiologist is present) but without adequate resuscitation equipment or the skill to use it. When a sudden unexpected event occurs, they call 911 for assistance. The delay in providing proper resuscitation, however, often results in either the death of the patient, or a serious hypoxic brain injury.

In these cases, and in all cases where the negligence of the doctor or nurse cannot be justified, causation is the usual defense, as it was in the Murray trial. That is because scientific causation is completely within the control of the defendant health care provider. The great body of scientific literature in all fields of medical care provide sample support for any medical expert to claim that a doctor’s negligence was not the cause of injury or death of the patient. Even when the prosecution, or the plaintiff in a civil case, can present an expert with the background and experience of Steven Shafer MD, the defense can still cast reasonable doubt on causation through an equally or even more qualified expert, such as Dr. Paul White.

In any medical malpractice case, the prosecution or plaintiff must present medical experts to testify on both the standard of care (negligence) and causation. Not surprisingly, most physicians are reluctant to testify against other physicians, and if they do participate in a medical-legal case, they prefer to testify for the physician. In the Murray case, the allegations of negligence were so outrageous that the California Medical Board took action to suspend his medical license earlier this year. To do so, the Medical Board required the opinion of two medical experts to state that Murray’s care of Michael Jackson represented gross negligence.

Finding two such experts was not difficult. The cardiologist and pulmonologist who submitted reports to the Medical Board later testified at the criminal trial. Both stated that Murray was grossly negligent, and that his negligence was a substantial factor in causing the death of Jackson. They also testified that even if Jackson took the fatal dose of Propofol or other drugs himself with Murray out of the room, Murray was still responsible for the death because he allowed the drugs to be within easy reach, and such actions by Jackson were foreseeable.

Ordinarily, testimony like this would be more than sufficient to find Murray liable. But in a criminal case, the prosecution knows that the jury wants hard evidence of direct cause and effect. Enter the causation experts to testify about how Jackson received the fatal dose. In this case, it would be hard to find two more qualified experts on the subject of Propofol, yet their opinions on causation were exactly opposite of each other. It is in the very nature of “scientific experts” that two such well qualified experts can look at a glass of water and disagree about whether it is half empty or half full, and each expert can quote the scientific literature in support.

The Murray case, like most medical malpractice cases, involved evidence of negligent care, which the jury usually understands, and evidence on causation, which the jury rarely understands. As a consequence, and since a lay jury will always decide the facts that they understand, a case of overwhelming negligence will more often result in a jury finding of liability against a doctor, or in the Murray case, a verdict of guilty of involuntary manslaughter. Once the judge instructed the jury that they could find Murray guilty – even if they believed that Jackson injected the fatal dose of Propofol – if such an act was reasonably foreseeable by Murray, the prosecution was practically guaranteed a victory. But before the jury was given the instructions, Murray’s lawyers put on a classic medical malpractice case defense.

In most medical malpractice cases, the defense prefers to blame the patient’s underlying disease, rather than the patient, since almost all medical malpractice cases involve a patient with some significant underlying disease or even multiple diseases. In Jackson’s case, the coroner commented about how good his heart was for a 50-year-old man. But if Jackson had the usual findings of coronary artery disease or an enlarged heart, which is more consistent with his age, the defense would have tried to claim that his heart was the cause of the arrest, not the Propofol.

The main defense presented by Murray’s lawyers involved blaming others, including those in Jackson’s household, and Dr. Arnold Klein, who gave him repeated high doses of Demerol over the months prior to his death. The only reason Murray’s attorneys put up an “addiction specialist” with such meager credentials and poor courtroom manner was to put Klein’s medical records into evidence. That allowed them to argue to the jury that if they believed Murray to be responsible for Jackson’s death, then he was not the only doctor liable, and it would not be fair to hold Murray solely responsible.

In any medical malpractice case involving clear evidence of negligence, blaming a physician or party not named the case allows the defendant to appeal to the jurors’ sense of justice. It is standard practice in any medical malpractice case with multiple defendants. If there is a potential defendant who has been dismissed, or never named in the case, the defendant at trial will attempt to spotlight the “empty chair,” in the argument that he or she has as much or more responsibility than the remaining defendant at trial. This is why many cases that settle with one defendant prior to trial will be lost at trial because the jury concludes that the “missing” doctor was really the one at fault.

The last section of the medical malpractice defense playbook involves showing the jury that the doctor is really a caring competent physician who could not possibly have done what is alleged. Because the Murray trial was a criminal case, evidence of character could be used to create reasonable doubt about Murray’s conduct. Thus the judge allowed several character witnesses to testify about how kind and caring Murray was prior to his involvement with Jackson. In a civil medical malpractice case, the doctor always testifies and presents evidence of good character by discussing his or her years of experience and the implication that he or she has never been found negligent before.

Ultimately, the jury was able to conclude that Murray’s care of Jackson, if it can be called medical care at all, was so reckless and dangerous that it caused his death. Some doctors will probably view this case as a strange aberration of inexcusable conduct by a wayward physician, but hopefully most of them will understand that this verdict re-affirms the primary obligation owed by doctors to the health and welfare of their patients, even under bizarre or unusual circumstances.

Bruce G. Fagel, of the Law Offices of Bruce G. Fagel & Associates in Beverly Hills is a physician and medical malpractice attorney.