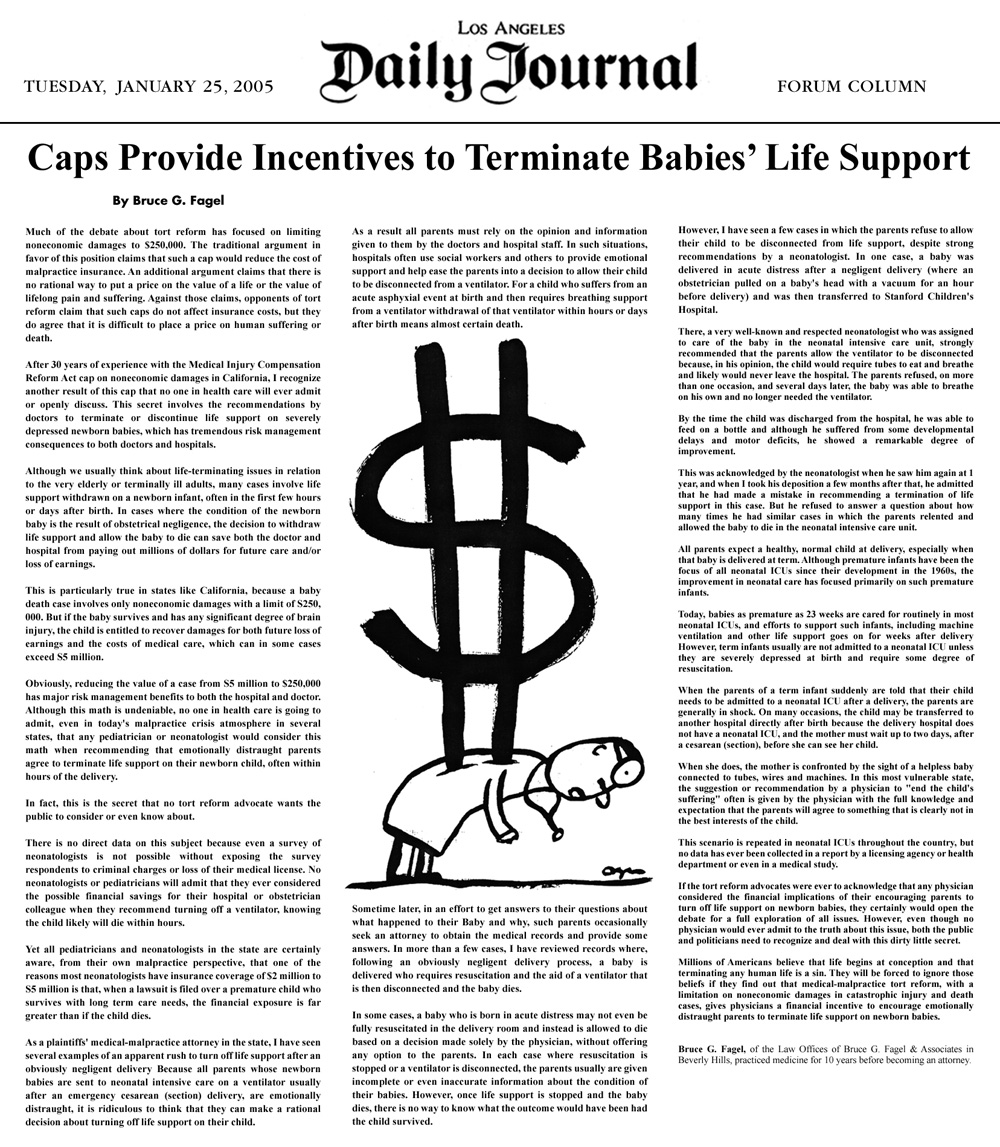 Against those claims, opponents of tort reform claim that such caps do not affect insurance costs, but they do agree that it is difficult to place a price on human suffering or death.

After 30 years of experience with the Medical Injury Compensation Reform Act cap on noneconomic damages in California, I recognize another result of this cap that no one in health care will ever admit or openly discuss. This secret involves the recommendations by doctors to terminate or discontinue life support on severely depressed newborn babies, which has tremendous risk management consequences to both doctors and hospitals.

Although we usually think about life-terminating issues in relation to the very elderly or terminally ill adults, many cases involve life support withdrawn on a newborn infant, often in the first few hours or days after birth. In cases where the condition of the newborn baby is the result of obstetrical negligence, the decision to withdraw life support and allow the baby to die can save both the doctor and hospital from paying out millions of dollars for future care and/or loss of earnings.

This is particularly true in states like California, because a baby death case involves only noneconomic damages with a limit of $250,000. But if the baby survives and has any significant degree of brain injury, the child is entitled to recover damages for both future loss of earnings and the costs of medical care, which can in some cases exceed $5 million.

Obviously, reducing the value of a case from $5 million to $250,000 has major risk management benefits to both the hospital and doctor. Although this math is undeniable, no one in health care is going to admit, even in today’s malpractice crisis atmosphere in several states, that any pediatrician or neonatologist would consider this math when recommending that emotionally distraught parents agree to terminate life support on their newborn child, often within hours of the delivery.

In fact, this is the secret that no tort reform advocate wants the public to consider or even know about. There is no direct data on this subject because even a survey of neonatologists is not possible without exposing the survey respondents to criminal charges or loss of their medical license. No neonatologists or pediatricians will admit that they ever considered the possible financial savings for their hospital or obstetrician colleague when they recommend turning off a ventilator, knowing the child likely will die within hours.

Yet all pediatricians and neonatologists in the state are certainly aware, from their own malpractice perspective, that one of the reasons most neonatologists have insurance coverage of $2million to $5 million is that, when a lawsuit is filed over a premature child who survives with long-term care needs, the financial exposure is far greater than if the child dies.

As a plaintiffs’ medical-malpractice attorney in the state, I have seen several examples of an apparent rush to turn off life support after an obviously negligent delivery. Because all parents whose newborn babies are sent to neonatal intensive care on a ventilator, usually after an emergency cesarean (section) delivery, are emotionally distraught, it is ridiculous to think that they can make a rational decision about turning off life support on their child.

As a result, all parents must rely on the opinion and information given to them by the doctors and hospital staff. In such situations, hospitals often use social workers and others to provide emotional support and help ease the parents into a decision to allow their child to be disconnected from a ventilator. For a child who suffers from an acute asphyxial event at birth and then requires breathing support from a ventilator, withdrawal of that ventilator within hours or days after birth means almost certain death.

Sometime later, in an effort to get answers to their questions about what happened to their baby and why, such parents occasionally seek an attorney to obtain the medical records and provide some answers. In more than a few cases, I have reviewed records where, following an obviously negligent delivery process, a baby is delivered who requires resuscitation and the aid of a ventilator that is then disconnected and the baby dies.

In some cases, a baby who is born in acute distress may not even be fully resuscitated in the delivery room and instead is allowed to die based on a decision made solely by the physician, without offering any option to the parents. In each case where resuscitation is stopped or a ventilator is disconnected, the parents usually are given incomplete or even inaccurate information about the condition of their babies. However, once life support is stopped and the baby dies, there is no way to know what the outcome would have been had the child survived.

However, I have seen a few cases in which the parents refuse to allow their child to be disconnected from life support, despite strong recommendations by a neonatologist. In one case, a baby was delivered in acute distress after a negligent delivery (where an obstetrician pulled on a baby’s head with a vacuum for an hour before delivery) and was then transferred to Stanford Children’s Hospital.

There, a very well-known and respected neonatologist who was assigned to care of the baby in the neonatal intensive care unit, strongly recommended that the parents allow the ventilator to be disconnected because, in his opinion, the child would require tubes to eat and breathe and likely would never leave the hospital. The parents refused, on more than one occasion, and several days later, the baby was able to breathe on his own and no longer needed the ventilator.

By the time the child was discharged from the hospital, he was able to feed on a bottle, and although he suffered from some developmental delays and motor deficits, he showed a remarkable degree of improvement.

This was acknowledged by the neonatologist when he saw him again at 1 year, and when I took his deposition a few months after that, he admitted that he had made a mistake in recommending a termination of life support in this case. But he refused to answer a question about how many times he had similar cases in which the parents relented and allowed the baby to die in the neonatal intensive care unit.

All parents expect a healthy, normal child at delivery, especially when that baby is delivered at term. Although premature infants have been the focus of all neonatal ICUs since their development in the 1960s, the improvement in neonatal care has focused primarily on such premature infants.

Today, babies as premature as 23 weeks are cared for routinely in most neonatal ICUs, and efforts to support such infants, including machine ventilation and other life support goes on for weeks after delivery. However, term infants usually are not admitted to a neonatal ICU unless they are severely depressed at birth and require some degree of resuscitation.

When the parents of a term infant suddenly are told that their child needs to be admitted to a neonatal ICU after a delivery, the parents are generally in shock. On many occasions, the child may be transferred to another hospital directly after birth because the delivery hospital does not have a neonatal ICU, and the mother must wait up to two days, after a cesarean (section), before she can see her child.

When she does, the mother is confronted by the sight of a helpless baby connected to tubes, wires and machines. In this most vulnerable state, the suggestion or recommendation by a physician to “end the child’s suffering” often is given by the physician with the full knowledge and expectation that the parents will agree to something that is clearly not in the best interests of the child.

This scenario is repeated in neonatal ICUs throughout the country, but no data has ever been collected in a report by a licensing agency or health department or even in a medical study.

If the tort reform advocates were ever to acknowledge that any physician considered the financial implications of their encouraging parents to turn off life support on newborn babies, they certainly would open the debate for a full exploration of all issues. However, even though no physician would ever admit to the truth about this issue, both the public and politicians need to recognize and deal with this dirty little secret.

Millions of Americans believe that life begins at conception and that terminating any human life is a sin. They will be forced to ignore those beliefs if they find out that medical-malpractice tort reform, with a limitation on noneconomic damages in catastrophic injury and death cases, gives physicians a financial incentive to encourage emotionally distraught parents to terminate life support on newborn babies.

Bruce G. Fagel, of the Law Offices of Bruce G. Fagel & Associates in Beverly Hills, practiced medicine for 10 years before becoming an attorney.