Published in: The National Law Journal 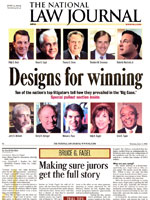 Ten of the nation’s top litigators tell how they prevailed in the ‘Big Case.’

Making sure jurors get the full story

“JURORS REACH THE right decisions often for the wrong reasons,” said Bruce G. Fagel, a plaintiffs’ lawyer who specializes in medical malpractice cases. His cases usually come down to a handful of facts, which aren’t always the ones the lawyers consider most important.

Fagel’s challenge is to provide jurors a full account of the events leading to the injury—despite the defense effort to limit such evidence—and deliver it in a form they can understand.

“They like to figure out the facts for themselves,” Fagel said of juries, “and then agree or disagree with the experts based on the positions they’ve come to. And you never know when they’re going to say, ‘OK, there’s enough there to convince me.’”

It’s both an advantage and a disadvantage that he’s also an M.D. who practiced emergency medicine for a decade before attending law school, said the 56-year-old lawyer. “I’m not as dependent on my medical experts as others would be for understanding the case.” When he cross-examines experts, “I can follow when they go off on a tangent, which occurs very frequently.”

But a medical degree is “not a panacea or a replacement for basic trial skills.” It can even be a disadvantage, he said, because sometimes it’s hard for him to tell whether a jury can absorb the information he’s providing.

Fagel’s litmus test is Trudy Miller. Also known as Trudy Fagel, his wife of 28 years, she has been his assistant for the 22 years he’s practiced law and is always with him in court. Jurors aren’t told that he’s a doctor, or that they’re married (which is why she uses her maiden name), but Fagel’s rule of thumb is: “If I can’t explain something so that she understands it, I know the jury doesn’t understand it.”

Fagel estimates that he’s tried about 45 medical-negligence cases in his career. Two made the NIJ’s top 100 verdicts last year. Greenwell v. Kaplan, which ranked 39th, was in many respects typical of his cases, though the outcome was not.

Julia Greenwell, 31, was admitted to John Muir Medical Center in Walnut Creek, Calif., on the evening of Oct. 20, 1999, for induction of labor. As is common in such cases, Fagel said, her obstetrician, Alan Kaplan, examined her the next morning and then went to his office to see other patients, planning to return afterward for the delivery. Before he left, Kaplan diagnosed pregnancy-induced hypertension and prescribed medication.

During the day, nurses noted problems with the oxygen supply to the fetus and faxed the fetal monitor strip to the doctor. But Kaplan didn’t return until 5:15 p.m. He found the baby rotated in an awkward position and, when he couldn’t correct the problem by 6 p.m., ordered a Caesarean section.

During the procedure, the baby’s heart rate was found to be dangerously slow and an emergency delivery was completed as quickly as possible. But not quickly enough, according to Fagel. Caitlin Greenwell had suffered oxygen deprivation, which, he said, led directly to her condition. She has cerebral palsy.

The plaintiffs claimed the cause was negligent care by the doctor, nurses and hospital. The defense contended that her injury resulted from an undiagnosable infection in utero and acute compression of the umbilical cord. The five-week trial resulted in a verdict last October of $59.3 million.

Why are you suing?

The classic defense in a brain-damaged-baby case, Fagel said, is: Why are you suing? The doctor saved the baby’s life. “Which is true,” he said. But that doesn’t mean that the doctor didn’t cause the injury he was trying to treat. Which, in this case, he added, was also true.

Often the greatest challenge in trying these cases, Fagel said, is getting the full story to the jury. Typically, the defense tries to limit the evidence to events immediately surrounding the injury, when the doctor worked feverishly to save the baby’s life, and asks the judge to exclude everything else.

In Greenwell, the defense filed many motions before and during the trial to exclude evidence, Fagel said. His task was to convince the judge that the jury needed to examine acts of omission as well as commission to understand what caused the injury. Almost always, Fagel said, there is “a multitude of errors.”

For example, the morning that Julia Greenwell checked into the hospital, a nurse noted that she had high blood pressure. But the nurse failed to consult the hospital’s staff doctor or call Kaplan, who didn’t learn this until the following morning. Of the women who develop high blood pressure during pregnancy, 30% show signs for the first time during labor, Fagel said, and the condition can be fatal for mother and fetus.

But the defense argued that the nurse’s omission was too far removed from the injury to be relevant.

Fagel won the argument. But it still isn’t easy to prove a negative. And proving a patient’s treatment was below the standard of care, he said, usually means showing the jury that something should have been done and wasn’t.

One strategy he’s found effective is casting a wide net when he deposes witnesses. In addition to the people who provided care, he deposes those who could have provided care but didn’t, like the hospital’s staff doctor. His deposition confirmed that the doctor was available, but was never consulted.

In order to present evidence in a form most easily digested by a jury, Fagel often uses time lines. In Greenwell he used three, each mounted on a 3- by 5-foot board, and he left them where the jury could see them even when they weren’t in use. He confined the information to nurses’ notes and medical records to limit defense objections, and he noticed several jurors taking notes while studying them.

Since California has a $250,000 cap on pain and suffering, he presented lots of evidence on economic damages.

But rather than focus on what the plaintiff can’t do, he brings in rehabilitation specialists to discuss services that can maximize what she can do.

“Jurors want to feel they’re in the position of helping someone,” he said.

Yet Fagel never knows what will resonate with the jury. Jurors told him after the trial that they were disturbed that the nurse who monitored Greenwell was new. They didn’t believe that a senior nurse, who was also on duty, was really supervising. She entered notes in the record only two weeks after Caitlin was born. This was an issue that seemed to influence the jury’s verdict.

Fagel had worked particularly hard to establish the hospital’s liability, feeling that this was the weaker claim. To his surprise, however, the jury did something he’d never seen before. It found the hospital negligent, but not the doctor.

It was a classic case of a jury reaching a partly right decision, Fagel said, for partly wrong reasons. And the judge essentially agreed with this assessment. In an unreported minute order dated Jan. 10, 2003, Judge James Trembath denied the hospital’s motion for judgment notwithstanding the verdict, ruling that there was “substantial evidence” supporting the jury’s findings.

However, the judge granted the hospital’s motion for a new trial, finding the jury’s verdict inconsistent and “against law,” since almost everything the nurses did was based on the doctor’s instructions. The judge ordered a new trial for both the hospital and Kaplan.

Though Fagel wasn’t exactly thrilled, he was gratified that the judge had brought the doctor back in the case. After the judge’s order, the case quickly settled for a confidential amount.

Nearly all his cases settle after trial, Fagel said, since plaintiffs can rarely afford to wait out the appeals process, which can take two years or longer.

In Greenwell, both the hospital and doctor paid, Fagel said, and substantially more than they offered before trial.

caption: BRUCE G. FAGEL: If he can’t explain the facts of the case so his wife understands, the jury won’t get it.