Discovering a Major Problem With Plan B 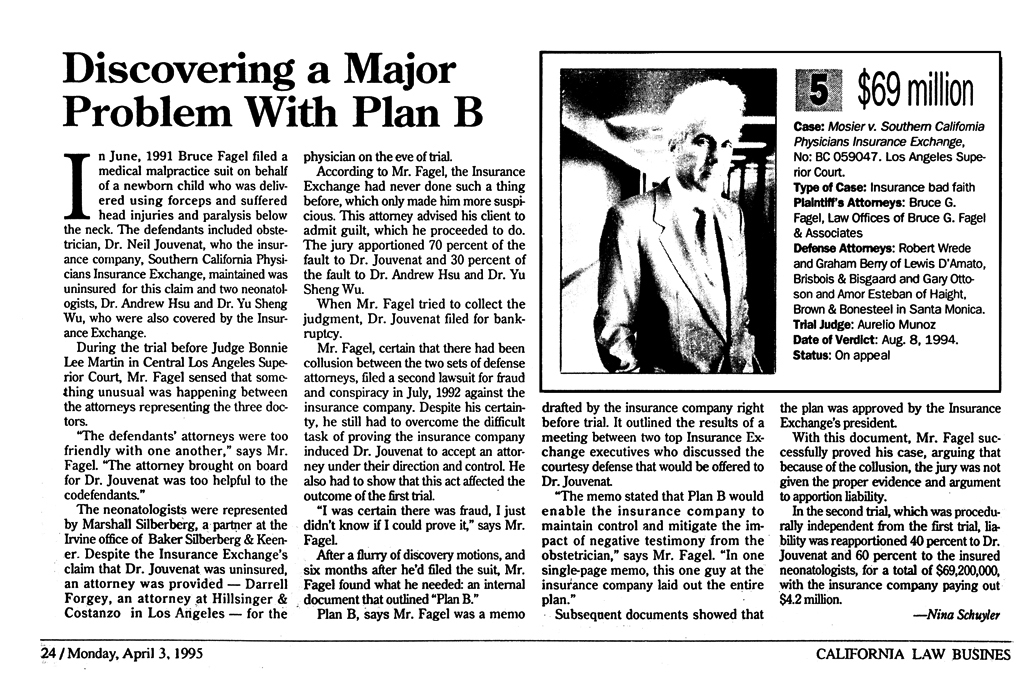 In June, 1991 Bruce Fagel filed a medical malpractice suit on behalf of a newborn child who was delivered using forceps and suffered head injuries and paralysis below the neck. The defendants included obstetrician, Dr. Neil Jouvenat, who the insurance company, Southern California Physicians Insurance Exchange, maintained was uninsured for this claim and two neonatologists, Dr. Andrew Hsu and Dr. Yu-Sheng Wu, who were also covered by the Insurance Exchange.

During the trial before Judge Bonnie Lee Martin in Central Los Angeles Superior Court, Mr. Fagel sensed that something unusual was happening between the attorneys representing the three doctors.

“The defendants’ attorneys were too friendly with one another,” says Mr. Fagel. “The attorney brought on board for Dr. Jouvenat was too helpful to the codefendants.”

The neonatologists were represented by Marshall Silberberg, a partner of the Irvine office of Baker, Silberberg & Keener. Despite the Insurance Exchange’s claim that Dr. Jouvenat was uninsured, an attorney was provided — Darrell Forgey, an attorney at Hillsinger & Costanzo in Los Angeles — for the physician on the eve of the trial.

According to Mr. Fagel, the Insurance Exchange had never done such a thing before, which only made him more suspicious. This attorney advised his client to admit guilt, which he proceeded to do. The jury apportioned 70 percent of the fault going to Dr. Jouvenat and 30 percent of the fault to Dr. Andrew Hsu and Dr. Yu-Sheng Wu.

When Mr. Fagel tried to collect the judgment, Dr. Jouvenat filed for bankruptcy.

Mr. Fagel, certain that there had been collusion between the two sets of defense attorneys, filed a second lawsuit for fraud and conspiracy in July, 1992 against the insurance company. Despite his certainty, he still had to overcome the difficult task of proving the insurance company induced Dr. Jouvenat to accept an attorney under their direction and control. He also had to show that this act affected the outcome of the first trial.

“I was certain there was fraud, I just didn’t know if I could prove it,” says Mr. Fagel.

After a flurry of discovery motions, and six months after he’d filed the suit, Mr. Fagel found what he needed: an internal document that outlined “Plan B.”

Plan B, says Mr. Fagel was a memo drafted by the insurance company right before trial. It outlined the results of a meeting between two top Insurance Exchange executives who discussed the courtesy defense that would be offered to Dr. Jouvenat.

Subsequent documents showed that the plan was approved by the Insurance Exchange’s president.

With this document, Mr. Fagel successfully proved his case, arguing that because of the collusion, the jury was not given the proper evidence and argument to apportion liability.

In the second trial, which was procedurally independent from the first trial, liability was reapportioned from 40 percent to Dr. Jouvenat and 60 percent to the insured neonatologists, for a total of $69,200,000, with the insurance company paying out $4.2 million.