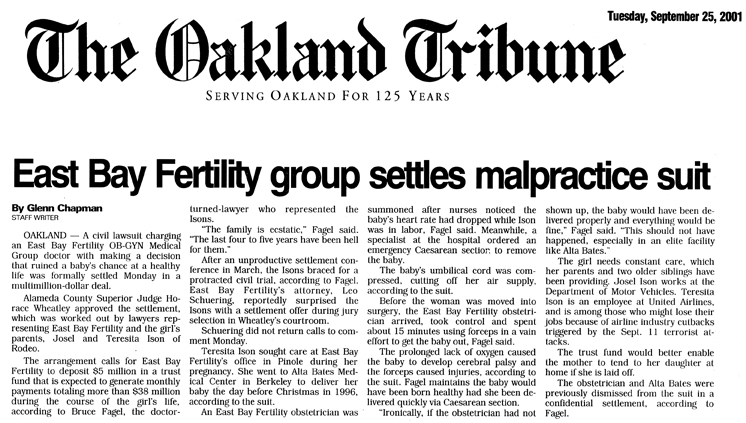 OAKLAND — A civil lawsuit charging an East Bay Fertility OB-GYN Medical Group doctor with making a decision that ruined a baby’s chance at a healthy life was formally settled Monday in a multimillion-dollar deal.

Alameda County Superior Judge Horace Wheatley approved the settlement, which was worked out by lawyers representing East Bay Fertility and the girl’s parents, Josel and Teresita Ison of Rodeo.

The arrangement calls for East Bay Fertility to deposit $5 million in a trust fund that is expected to generate monthly payments totaling more than $38 million during the course of the girl’s life, according to Bruce Fagel, the doctor-turned-lawyer who represented the Isons.

“The family is ecstatic,” Fagel said, “The last four to five years have been hell for them.”

After an unproductive settlement conference in March, the Isons braced for a protracted civil trial, according to Fagel. East Bay Fertility’s attorney, Leo Schuering, reportedly surprised the Isons with a settlement offer during jury selection in Wheatley’s courtroom.

Teresita Ison sought care at East Bay Fertility’s office in Pinole during her pregnancy. She went to Alta Bates Medical Center in Berkeley to deliver her baby the day before Christmas in 1996, according to the suit.

An East Bay Fertility obstetrician was summoned after nurses noticed the baby’s heart rate had dropped while Ison was in labor, Fagel said. Meanwhile, a specialist at the hospital ordered an emergency Caesarean section to remove the baby.

The baby’s umbilical cord was compressed, cutting off her air supply, according to the suit.

Before the woman was moved into surgery, the East Bay Fertility obstetrician arrived, took control and spent about 15 minutes using forceps in a vain effort to get the baby out, Fagel said.

The prolonged lack of oxygen caused the baby to develop cerebral palsy and the forceps caused injuries, according to the suit. Fagel maintains the baby would have been born healthy had she been delivered quickly via Caesarean section.

“Ironically, if the obstetrician had not shown up, the baby would have been delivered properly and everything would be fine,” Fagel said. “This should not have happened, especially in an elite facility like Alta Bates.”

The girl needs constant care, which her parents and two older siblings have been providing. Josel Ison works at the Department of Motor Vehicles. Teresita Ison is an employee at United Airlines, and is among those who might lose their jobs because of airline industry cutbacks triggered by the Sept. 11 terrorist attacks.

The trust fund would better enable the mother to tend to her daughter at home if she is laid off.

The obstetrician and Alta Bates were previously dismissed from the suit in a confidential settlement, according to Fagel.