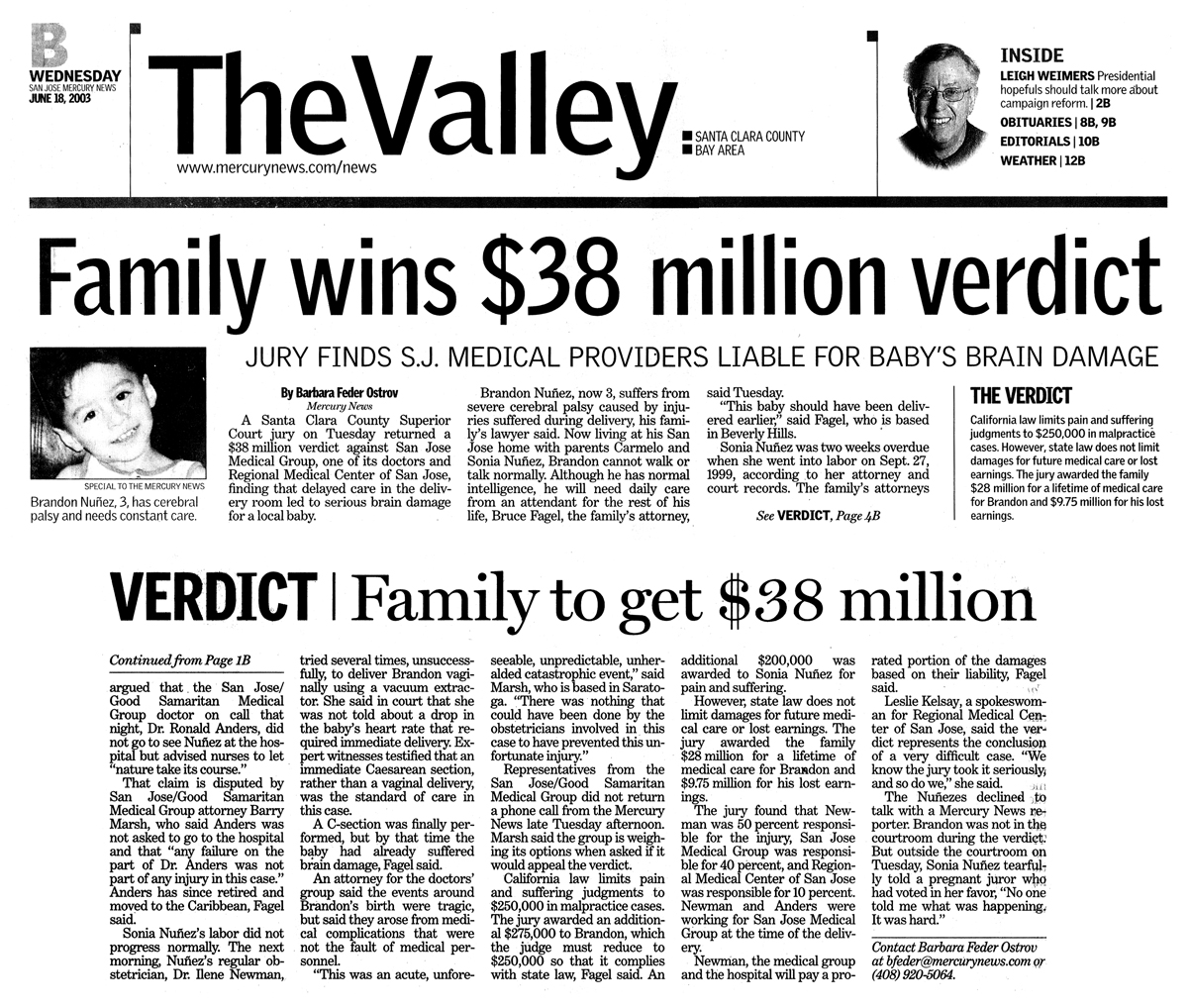 [photo not shown, caption:] Brandon Nuñez, 3, has cerebral palsy and needs constant care. A Santa Clara County Superior Court jury on Tuesday returned a $38 million verdict against San Jose Medical Group, one of its doctors and Regional Medical Center of San Jose, finding that delayed care in the delivery room led to serious brain damage for a local boy.

Brandon Nuñez, now 3, suffers from severe cerebral palsy caused by injuries suffered during delivery, his family’s lawyer said. Now living at his San Jose home with parents Carmelo and Sonia Nuñez, Brandon cannot walk or talk normally. Although he has normal intelligence, he will need daily care from an attendant for the rest of his life, Bruce Fagel, the family’s attorney said Tuesday.

“This baby should have been delivered earlier,” said Fagel, who is based in Beverly Hills.

Sonia Nuñez was two weeks overdue when she went into labor on Sept. 27, 1999, according to her attorney and court records. The family’s attorneys argued that the San Jose/ Good Samaritan Medical Group doctor on call that night, Dr. Ronald Anders, did not go to see Nuñez at the hospital but advised nurses to let “nature take its course.”

That claim is disputed by San Jose/Good Samaritan Medical Group attorney Barry Marsh, who said Anders was not asked to go to the hospital and that “any failure on the part of Dr. Anders was not part of any injury in this case.” Anders has since retired and moved to the Caribbean, Fagel said.

Sonia Nuñez’s labor did not progress normally. The next morning, Nuñez’s regular obstetrician, Dr. Ilene Newman, tried several times, unsuccessfully, to deliver Brandon vaginally using a vacuum extractor. She said in court that she was not told about a drop in the baby’s heart rate that required immediate delivery. Expert witnesses testified that an immediate Caesarean section, rather than a vaginal delivery, was the standard of care in this case.

A C-section was finally performed, but by that time the baby had already suffered brain damage, Fagel said.

An attorney for the doctors’ group said the events around Brandon’s birth were tragic, but said they arose from medical complications that were not the fault of medical personnel.

“This was an acute, unforeseeable, unpredictable, unheralded catastrophic event,” said Marsh, who is based in Saratoga. “There was nothing that could have been done by the obstetricians involved in this case to have prevented this unfortunate injury.”

Representatives from the San Jose/Good Samaritan Medical Group did not return a phone call from the Mercury News late Tuesday afternoon. Marsh said the group is weighing its options when asked if it would appeal the verdict

Newman, the medical group and the hospital will pay a pro-rated portion of the damages based on their liability, Fagel said.

Leslie Kelsay, a spokeswoman for Regional Medical Center of San Jose, said the verdict represents the conclusion of a very difficult case. “We know the jury took it seriously, and so do we,” she said.

The Nuñezes declined to talk with a Mercury News reporter. Brandon was not in the courtroom during the verdict. But outside the courtroom on Tuesday, Sonia Nuñez tearfully told a pregnant juror who had voted in her favor, “No one told me what was happening. It was hard.”