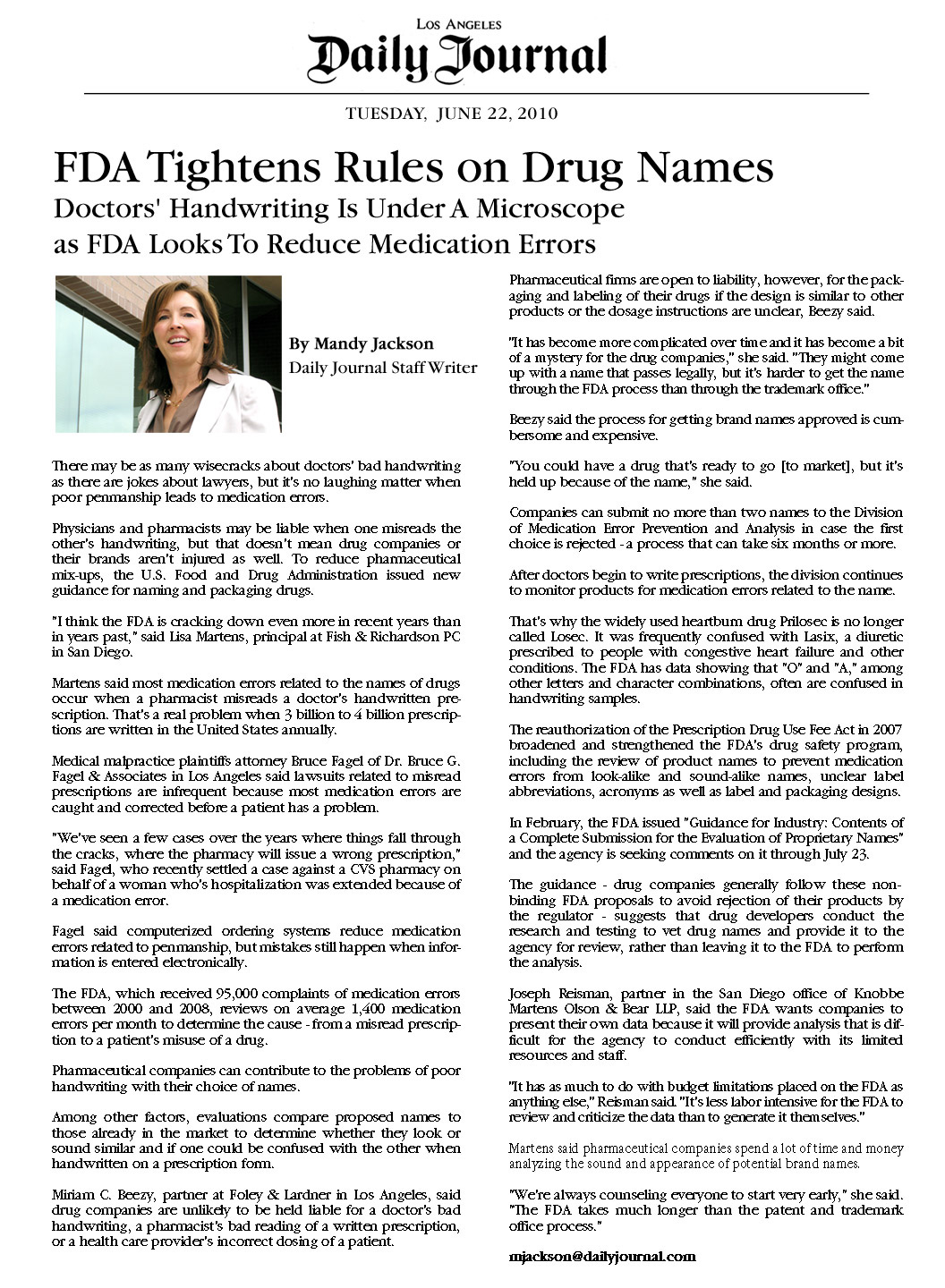 There may be as many wisecracks about doctors’ bad handwriting as there are jokes about lawyers, but it’s no laughing matter when poor penmanship leads to medication errors.

Physicians and pharmacists may be liable when one misreads the other’s handwriting, but that doesn’t mean drug companies or their brands aren’t injured as well. To reduce pharmaceutical mix-ups, the U.S. Food and Drug Administration issued new guidance for naming and packaging drugs.

“I think the FDA is cracking down even more in recent years than in years past,” said Lisa Martens, principal at Fish & Richardson PC in San Diego.

Martens said most medication errors related to the names of drugs occur when a pharmacist misreads a doctor’s handwritten prescription. That’s a real problem when 3 billion to 4 billion prescriptions are written in the United States annually.

Medical malpractice plaintiffs attorney Bruce Fagel of Dr. Bruce G. Fagel & Associates in Los Angeles said lawsuits related to misread prescriptions are infrequent because most medication errors are caught and corrected before a patient has a problem.

“We’ve seen a few cases over the years where things fall through the cracks, where the pharmacy will issue a wrong prescription,” said Fagel, who recently settled a case against a CVS pharmacy on behalf of a woman who’s hospitalization was extended because of a medication error.

The FDA, which received 95,000 complaints of medication errors between 2000 and 2008, reviews on average 1,400 medication errors per month to determine the cause – from a misread prescription to a patient’s misuse of a drug.

Pharmaceutical companies can contribute to the problems of poor handwriting with their choice of names. The FDA’s Division of Medication Error Prevention and Analysis reviews about 400 prospective brands annually and rejects roughly one-third of those names.

Among other factors, evaluations compare proposed names to those already in the market to determine whether they look or sound similar and if one could be confused with the other when handwritten on a prescription form.

Miriam C. Beezy, partner at Foley & Lardner in Los Angeles, said drug companies are unlikely to be held liable for a doctor’s bad handwriting, a pharmacist’s bad reading of a written prescription, or a health care provider’s incorrect dosing of a patient.

Pharmaceutical firms are open to liability, however, for the packaging and labeling of their drugs if the design is similar to other products or the dosage instructions are unclear, Beezy said.

“It has become more complicated over time and it has become a bit of a mystery for the drug companies,” she said. “They might come up with a name that passes legally, but it’s harder to get the name through the FDA process than through the trademark office.”

Beezy said the process for getting brand names approved is cumbersome and expensive.

“You could have a drug that’s ready to go [to market], but it’s held up because of the name,” she said.

Companies can submit no more than two names to the Division of Medication Error Prevention and Analysis in case the first choice is rejected – a process that can take six months or more.

After doctors begin to write prescriptions, the division continues to monitor products for medication errors related to the name.

That’s why the widely used heartburn drug Prilosec is no longer called Losec. It was frequently confused with Lasix, a diuretic prescribed to people with congestive heart failure and other conditions. The FDA has data showing that “O” and “A,” among other letters and character combinations, often are confused in handwriting samples.

The reauthorization of the Prescription Drug Use Fee Act in 2007 broadened and strengthened the FDA’s drug safety program, including the review of product names to prevent medication errors from look-alike and sound-alike names, unclear label abbreviations, acronyms as well as label and packaging designs.

In February, the FDA issued “Guidance for Industry: Contents of a Complete Submission for the Evaluation of Proprietary Names” and the agency is seeking comments on it through July 23.

The guidance – drug companies generally follow these non-binding FDA proposals to avoid rejection of their products by the regulator – suggests that drug developers conduct the research and testing to vet drug names and provide it to the agency for review, rather than leaving it to the FDA to perform the analysis.

Joseph Reisman, partner in the San Diego office of Knobbe Martens Olson & Bear LLP, said the FDA wants companies to present their own data because it will provide analysis that is difficult for the agency to conduct efficiently with its limited resources and staff.

“It has as much to do with budget limitations placed on the FDA as anything else,” Reisman said. “It’s less labor intensive for the FDA to review and criticize the data than to generate it themselves.”

Martens said pharmaceutical companies spend a lot of time and money analyzing the sound and appearance of potential brand names.

“We’re always counseling everyone to start very early,” she said. “The FDA takes much longer than the patent and trademark office process.” mjackson@dailyjournal.com