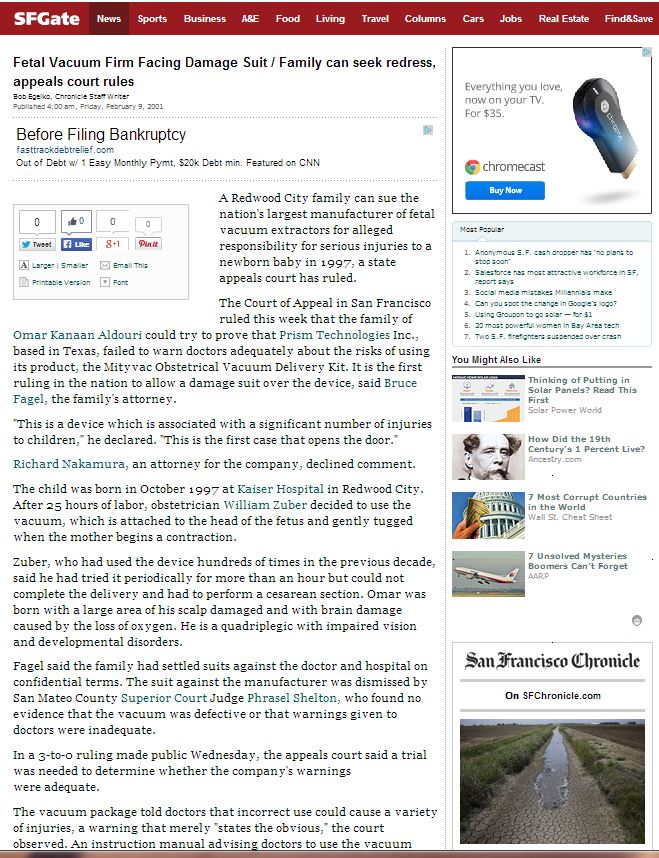 A Redwood City family can sue the nation’s largest manufacturer of fetal vacuum extractors for alleged responsibility for serious injuries to a newborn baby in 1997, a state appeals court has ruled.

The Court of Appeal in San Francisco ruled this week that the family of Omar Kanaan Aldouri could try to prove that Prism Technologies Inc., based in Texas, failed to warn doctors adequately about the risks of using its product, the Mityvac Obstetrical Vacuum Delivery Kit. It is the first ruling in the nation to allow a damage suit over the device, said Bruce Fagel, the family’s attorney.

“This is a device which is associated with a significant number of injuries to children,” he declared. “This is the first case that opens the door.”

Richard Nakamura, an attorney for the company, declined comment.

The child was born in October 1997 at Kaiser Hospital in Redwood City. After 25 hours of labor, obstetrician William Zuber decided to use the vacuum, which is attached to the head of the fetus and gently tugged when the mother begins a contraction.

Zuber, who had used the device hundreds of times in the previous decade, said he had tried it periodically for more than an hour but could not complete the delivery and had to perform a cesarean section. Omar was born with a large area of his scalp damaged and with brain damage caused by the loss of oxygen. He is a quadriplegic with impaired vision and developmental disorders.

Fagel said the family had settled suits against the doctor and hospital on confidential terms. The suit against the manufacturer was dismissed by San Mateo County Superior Court Judge Phrasel Shelton, who found no evidence that the vacuum was defective or that warnings given to doctors were inadequate.

In a 3-to-0 ruling made public Wednesday, the appeals court said a trial was needed to determine whether the company’s warnings were adequate.

The vacuum package told doctors that incorrect use could cause a variety of injuries, a warning that merely “states the obvious,” the court observed. An instruction manual advising doctors to use the vacuum according to their experience did not spell out how to use it or when it should not be used, the court said.

“Prism failed to establish facts demonstrating that the warnings that accompanied the Mityvac were legally adequate,” said the opinion by Presiding Justice Barbara Jones.