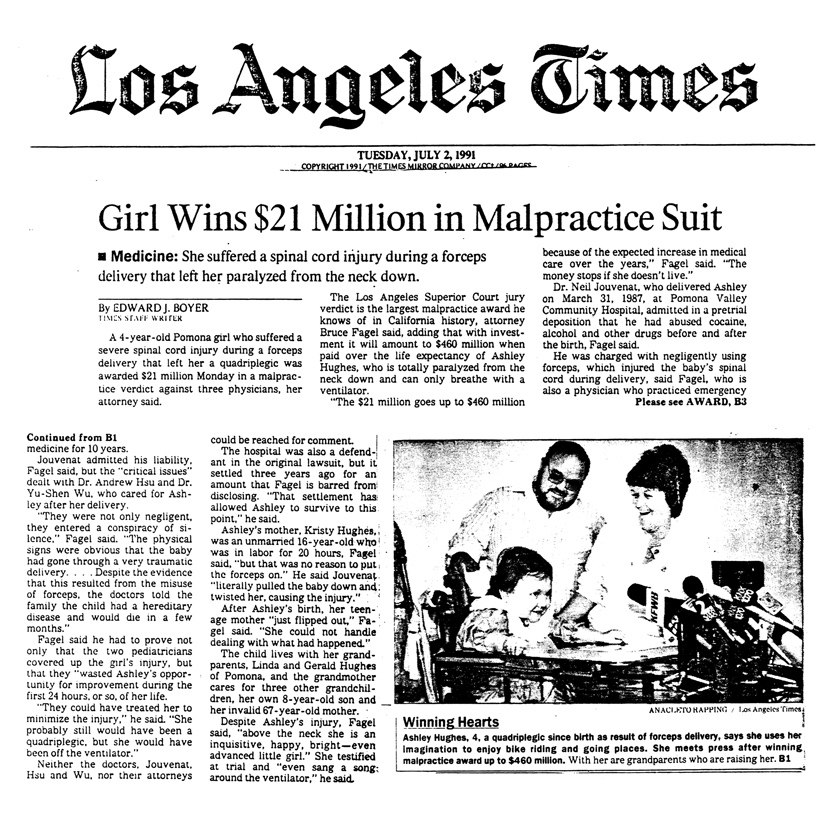 Medicine: She suffered a spinal cord injury during a forceps delivery that left her paralyzed from the neck down.

A 4-year-old Pomona girl who suffered a severe spinal cord injury during a forceps delivery that left her a quadriplegic was awarded $21 million Monday in a malpractice verdict against three physicians, her attorney said.

The Los Angeles Superior Court jury verdict is the largest malpractice award he knows of in California history, attorney Bruce Fagel said, adding that with investment it will amount to $460 million when paid over the life expectancy of Ashley Hughes, who is totally paralyzed from the next down and can only breathe with a ventilator.

“The $21 million goes up to $460 million because of the expected increase in medical care over the years,” Fagel said. “The money stops if she doesn’t live.”

Dr. Neil Jouvenat, who delivered Ashley on March 31, 1987, at Pomona Valley Community Hospital, admitted in a pretrial deposition that he had abused cocaine, alcohol and other drugs before and after the birth, Fagel said.

He was charged with negligently using forceps, which injured the baby’s spinal cord during delivery, said Fagel, who is also a physician who practiced emergency medicine for 10 years.

Jouvenat admitted his liability, Fagel said, but the “critical issues” dealt with Dr. Andrew Hsu and Dr. Yu-Shen Wu, who cared for Ashley after her delivery. “They were not only negligent, they entered a conspiracy of silence,” Fagel said.

“The physical signs were obvious that the baby had gone through a very traumatic delivery….Despite the evidence that this resulted from the misuse of forceps, the doctors told the family the child had a hereditary disease and would die in a few months.”

Fagel said he had to prove not only that the two pediatricians covered up the girl’s injury, but that they “wasted Ashley’s opportunity for improvement during the first 24 hours, or so, of her life.

Neither the doctors, Jouvenat, Hsu and Wu, nor their attorneys could be reached for comment.

The hospital was also a defendant in the original lawsuit, but it settled three years ago for an amount that Fagel is barred from disclosing. “That settlement has allowed Ashley to survive to this point,” he said.

Ashley’s mother, Kristy Hughes, was an unmarried 16-year-old who was in labor for 20 hours, Fagel said, “but that was no reason to put the forceps on.” He said Jouvenat “literally pulled the baby down and twisted her, causing the injury.”

After Ashley’s birth, her teenage mother “just flipped out,” Fagel said. “She could not handle dealing with what had happened.”

The child lives with her grandparents, Linda and Gerald Hughes of Pomona, and the grandmother cares for three other grandchildern, her own 8-year-old son and her invalid 67-year-old mother.

Despite Ashley’s injury, Fagel said, “above the neck she is an inquisitive, happy, bright—even advanced little girl.” She testified at trial and “even sang a song around the ventilator,” he said.