Health Care Safety and the Culture of Silence 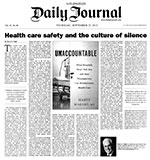 Health care safety and the culture of silence

Two articles from opposite ends of the political spectrum were published about health care in the same week. Newsweek’s article in their Sept. 24 magazine was titled “Hospitals Can Kill You,” and the Wall Street Journal article on Sept. 22 was titled “How to Stop Hospitals From Killing Us.” Both were written by Dr. Marty Makary, a Johns Hopkins surgeon, and were based on his book published earlier this year called “Unaccountable: What Hospitals Won’t Tell You and How Transparency Can Revolutionize Health Care.”

The main point of the book and both articles is that the lack of transparency provides little incentive to change a system that results in over 100,000 deaths a year from medical mistakes. The statistics quoted by Makary are truly frightening. If medical errors were a disease, it would be the sixth leading cause of death in the U.S. Some 20 to 30 percent of all medications, tests and procedures are unnecessary. Dr. Harvey Fineberg, president of the Institute of Medicine and former dean of the Harvard School of Public Health, claims that between 30 and 40 percent of the entire health care expenditure pays for fraud and unnecessary treatment. In any other industry such statistics would never be tolerated in a civilized society, but ironically because health care is something that we all depend upon, both the public and government at all levels are reluctant to challenge the health care industry to force accountability. Makary persuasively argues that the health care system and hospitals should be more open and accountable for their actions. He proposes several actions to make health care more transparent, including publishing performance ratings and safety scores, allowing patients to listen to the notes dictated by physicians (open notes), and eliminating the confidentiality gag on medical malpractice settlements.

While such suggestions are admirable, they are of little significance in comparison to the absolute cover that the law has given to all review of medical care by and within hospitals. Every state in the U.S. has a statute that provides near absolute immunity from discovery of any investigation or review of medical care that is provided in all 6,000 hospitals in the U.S. In California, Evidence Code Section 1157 states that neither the proceedings nor the records of organized committees of medical staffs in hospitals “having the responsibility of evaluation and improvement of the quality of care rendered in the hospital” shall be subject to discovery. This legal immunity has both justified and encouraged the code of silence that exists in all hospitals and which Makary eloquently describes in his book and the articles in the Wall Street Journal and Newsweek. From their earliest days in training, both doctors and nurses are taught to not discuss or even question medical mistakes that they know occur every day in hospitals. The legal immunity given to organized committees of the medical staff has been extended by attorneys defending doctors and hospitals to include any discussion after an event that might be subject to a review in a committee setting. Even the fact of such a committee review is always blocked during discovery, lest any creak in the “black box” of legal immunity might be interpreted by a court to waive such immunity. It is similar to the witness who refuses to give his name to a congressional investigation because answering any question might be interpreted as a waiver of their Fifth Amendment right against self-incrimination.

The culture of silence in hospitals, compounded by the immunity of discovery of any investigation or review of the care leading to a bad outcome, makes it harder for the victims of medical negligence to prove their case. But this culture of silence goes well beyond the small percentage of medical errors that result in medical malpractice claims.

Medical errors, including many easily preventable medical errors continue to occur because hospitals enjoy an absolute immunity of secrecy. Many of the reports and studies on the scope of medical errors or poor quality care are based on surveys where the information provider is never identified. Markay refers to many such studies where large numbers of doctors and nurses are critical of the care provided in their own hospital, but will never allow identification of themselves or the hospital.

The health care industry sold the idea of absolute discovery immunity for any investigation or discussion about the care provided in hospitals as being the only way that doctors and nurses can be open and candid about their statements made in such committee meetings. It made an implicit promise that such candid and closed discussions would lead to the improvement in care in hospitals. As a matter of public policy, if such immunity from discovery actually led to an improvement in health care for all citizens, it would be worth the burden it places on the victims of medical negligence in a legal context. But it is clear from all of the surveys and anecdotal data that health care has not become safer in hospitals. The failure by the health care industry to voluntarily improve basic safety issues led the state Legislature in 2006 to enact Health and Safety Code Section 1279.1, which identifies 28 “never events” which require reporting by hospitals to the California Department of Public Health. These events include such obvious adverse events as surgery on the wrong patient or wrong body part. When such events occurs, the department is required to investigate and when indicated to fine the hospital. Such fines are considered to be the best incentives for hospital to fix such safety problems. Yet such never events continue to occur.

[Makary] proposes several actions to make health care more transparent, including publishing performance ratings and safety scores.From their earliest days in training, both doctors and nurses are taught to not discuss or even question medical mistakes that they know occur every day in hospitals. In his Wall Street Journal article, Makary stated that “U.S. surgeons operate on the wrong body part as often as 40 times per week.” That is over 2,000 such incidents annually, for something that should be as obvious as a pilot landing a plane at the wrong airport. The airline industry has often been referenced as a model for improving health care. If 40 planes landed at the wrong airport in a week, the corrective measures to eliminate the problem would be implemented immediately. If those 40 wrong landings occurred with only a few airlines, passengers would flee in droves and the airlines would have a strong financial motivation to fix the problem. However, in health care the financial motive is in the opposite direction. Hospitals make more money, not less, when medical errors lead to longer and more complicated hospitalizations. But since most consumers do not directly pay for their health care, only the insurance companies and the government programs that pay hospitals are aware of these additional costs, and efforts to control these unnecessary costs have not been able to directly identify which increasing hospital costs are due to medical errors. The information needed to identify those costs is hidden within the same hospital committees that have the legal immunity for all in-hospital investigations.

In his book, Markay calls for providing the public with information about the quality of care in hospitals before a patient enters a hospital, but doctors and hospitals have no legal obligation to inform their patient or family member about what happened when a preventable adverse event occurs. When such events occur, on a daily basis in most hospitals, they are euphemistically referred to as a complication and any further opinion by the doctor or nurse about why such an event occurred is carefully isolated in the mind of the health care provider until the appropriate committee meeting. Regardless of what ever occurs in such meetings, the patient or patient’s family is never informed. The reason why most people contact an attorney about a possible medical malpractice claim is because no doctor or nurse was able to explain what happened to the patient or what they do tell to a patient or patient’s family sounds like a cover-up.

Lifting the code of silence in hospitals must start with the patient, both before and after an adverse event. But since such open transparency is not likely to occur anytime soon in the health care industry, the best financial incentive for improvement in safety will come from those patients and families who bring medical malpractice claims where the financial loss to both doctor and hospital is at least some incentive to improve care avoid such future financial losses. It is therefore ironic to most doctors and hospitals that medical malpractice cases filed by the few create a strong financial incentive to improve health care for everyone.