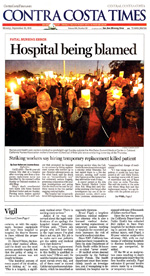 Nurses and health care workers conduct a candlelight vigil Sunday outside the Alta Bates Summit Medical Center in Oakland. California Nurses Association workers have been locked out of their jobs since conducting a one-day strike Thursday

By Sean Maher and Jeanine Benca

OAKLAND – The 66-year-old woman who died at a hospital after receiving care from a temporary replacement nurse was identified by the coroner’s office Sunday as Oakland resident Judith Ming.

Ming’s death reverberated both inside Alta Bates Summit Medical Center and out Sunday. Nursing union leaders painted her as the victim of a staff lockout that prompted the hospital to cut corners by hiring replacement nurses who weren’t up to par. Hospital administrators, on the other hand, said the death was an “extraordinarily rare” but extremely serious tragedy, promising cooperation with multiple investigations and asking that the death not be used for political means in the two parties’ ongoing contract battle.

The hospital had temporarily hired 500 replacement nurses to continue service when the California Nurses Association staged a one-day strike Thursday, but had signed them to a five-day contract, sending staff nurses who’d gone on strike home when they arrived for work Friday.

A cancer patient at the Alta Bates Summit Medical Center since July, Ming died early Saturday morning a few hours after investigators say one of the replacement nurses, who’d come from Louisiana, administered a “nonprescribed dosage of medication.”

“If I was taking care of that patient, it would not have happened at all,” said Alicia Torres, an oncology nurse with 27 years of experience and one of those who went on strike Thursday. She said she works in the same unit where Ming died and that replacement nurses “are not familiar with the policies and procedures, or with the equipment, because equipment will vary from hospital to hospital. So they’re thrown in there without the proper training.”

Dr. Steve O’Brien, the hospital’s chief medical officer said the death was the most serious possible tragedy, but that the policy of using replacement nurses was not clearly to blame.

“One hundred percent of every aspect of the situation, we’re looking at,” he said. “This is a tragedy, a significant medical error. There is nothing more serious.”

Asked if he was concerned about the legal ramifications of an apology the hospital issued Saturday, O’Brien said, “There are people who will later look at the legal issues. I’m glad that’s not my job. My job is to make sure our patients get the safety and medical care they deserve.”

As for using replacement nurses: “Everybody working in this facility is qualified to work here,” O’Brien said. He said the hospital uses replacement nurses every day, and all of them meet or exceed California’s professional standards, which he described as especially rigorous.

Since 2007, California hospitals have been required to inform the state Department of Public Health within 24 hours – 28 medical errors deemed inexcusable by the National Quality Forum. The health department must then immediately launch an investigation, and if wrongdoing is determined, the hospital can be slapped with tens of thousands of dollars worth of fines.

Since the law was passed, the California Department of Public Health has collected $4.6 million in fines from hospitals for incidents resulting in patient death or very serious injury, said Fagel, a 30-year veteran malpractice attorney. Still, with no real means of enforcing hospitals to disclose incidents, many cases go unreported, he added.

Of the 50 or so malpractice cases resulting in death or catastrophic injury that his firm handles annually, Fagel estimates 10 percent involve errors made by a traveling, or temporary nurse.

View this story in the Oakland Tribune.