Hospital Incentive To Bury Mistakes Must Be Rectified 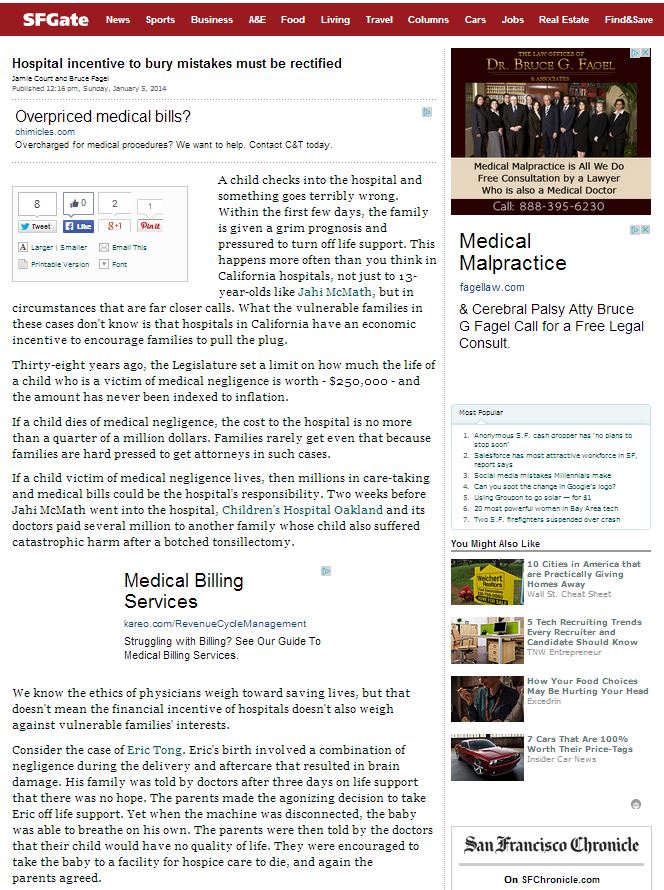 By: Jamie Court and Bruce Fagel

A child checks into the hospital and something goes terribly wrong. Within the first few days, the family is given a grim prognosis and pressured to turn off life support. This happens more often than you think in California hospitals, not just to 13-year-olds like Jahi McMath, but in circumstances that are far closer calls. What the vulnerable families in these cases don’t know is that hospitals in California have an economic incentive to encourage families to pull the plug.

Thirty-eight years ago, the Legislature set a limit on how much the life of a child who is a victim of medical negligence is worth – $250,000 – and the amount has never been indexed to inflation.

If a child dies of medical negligence, the cost to the hospital is no more than a quarter of a million dollars. Families rarely get even that because families are hard pressed to get attorneys in such cases.

If a child victim of medical negligence lives, then millions in care-taking and medical bills could be the hospital’s responsibility. Two weeks before Jahi McMath went into the hospital, Children’s Hospital Oakland and its doctors paid several million to another family whose child also suffered catastrophic harm after a botched tonsillectomy.

We know the ethics of physicians weigh toward saving lives, but that doesn’t mean the financial incentive of hospitals doesn’t also weigh against vulnerable families’ interests.

Consider the case of Eric Tong. Eric’s birth involved a combination of negligence during the delivery and aftercare that resulted in brain damage. His family was told by doctors after three days on life support that there was no hope. The parents made the agonizing decision to take Eric off life support. Yet when the machine was disconnected, the baby was able to breathe on his own. The parents were then told by the doctors that their child would have no quality of life. They were encouraged to take the baby to a facility for hospice care to die, and again the parents agreed.

After one week without feeding, the baby’s mother placed a few drops of formula into the infant’s mouth with a syringe and the baby began to feed. The Tongs were soon able to take the child home, and two years later when the case was settled, the recovery was so great that the child was able to ride his scooter at the mediation. The case was settled for several million dollars, most of which went into a trust fund to pay for Eric’s ongoing therapy and care needs.

One of the most perverse of the many unintended consequences of California’s 38-year-old limit on noneconomic damages in medical negligence cases is that it creates a financial incentive for doctors and hospitals to “bury their mistakes.” Because dead children have no “economic” value under the law – they have no dependents and no ongoing medical bills – the value of their lives is capped in 1976 dollars.

Doctors and hospitals can often rationalize that a family, and the medical care system, is better off letting a brain-damaged child die than raising him or her. But how can a family, grappling with a life and death decision, get impartial advice when doctors have such a conflict of interest?

Of all the tragic issues evoked by the McMath case, this conflict of interest is easiest to remedy.

Indexing this cap for inflation is one of the main aims of the Troy and Alana Pack Patient Safety Act. More than half of the 800,000 signatures needed to qualify the measure for the November ballot have been collected. When submitted, voters will have the chance to issue their verdict on one aspect of the McMath case eclipsed by all others: whether a child’s life should be worth more in California.

Jamie Court is president of Consumer Watchdog, which is working to put an initiative on the November ballot to raise the cap on medical damages. Bruce Fagel is a medical doctor and lawyer who has been a lawyer for 31 years after 10 years of medical practice.