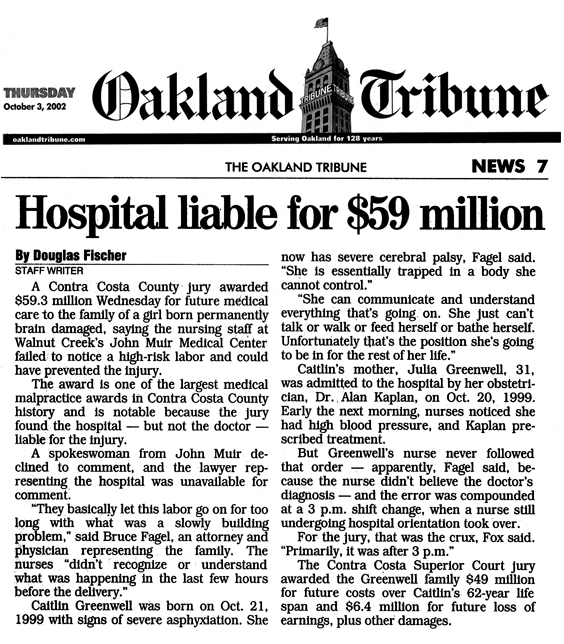 A Contra Costa County jury awarded $59.3 million Wednesday for future medical care to the family of a girl born permanently brain damaged, saying the nursing staff at Walnut Creek’s John Muir Medical Center failed to notice a high-risk labor and could have prevented the injury.

The award is one of the largest medical malpractice awards in Contra Costa County history and is notable because the jury found the hospital — but not the doctor — liable for the injury.

A spokeswoman from John Muir declined to comment, and the lawyer representing the hospital was unavailable for comment.

“They basically let this labor go on for too long with what was a slowly building problem,” said Bruce Fagel, an attorney and physician representing the family. The nurses “didn’t recognize or understand what was happening in the last few hours before the delivery.”

Caitlin Greenwell was born on Oct. 21, 1999 with signs of severe asphyxiation. She now has severe cerebral palsy, Fagel said. “She is essentially trapped in a body she cannot control.”

“She can communicate and understand everything that’s going on. She just can’t talk or walk or feed herself or bathe herself. Unfortunately that’s the position she’s going to be in for the rest of her life.”

Caitlin’s mother, Julia Greenwell, 31, was admitted to the hospital by her obstetrician, Dr. Alan Kaplan, on Oct. 20, 1999. Early the next morning, nurses noticed she had high blood pressure, and Kaplan prescribed treatment.

But Greenwell’s nurse never followed that order — apparently, Fagel said, because the nurse didn’t believe the doctor’s diagnosis — and the error was compounded at a 3 p.m. shift change, when a nurse still undergoing hospital orientation took over.