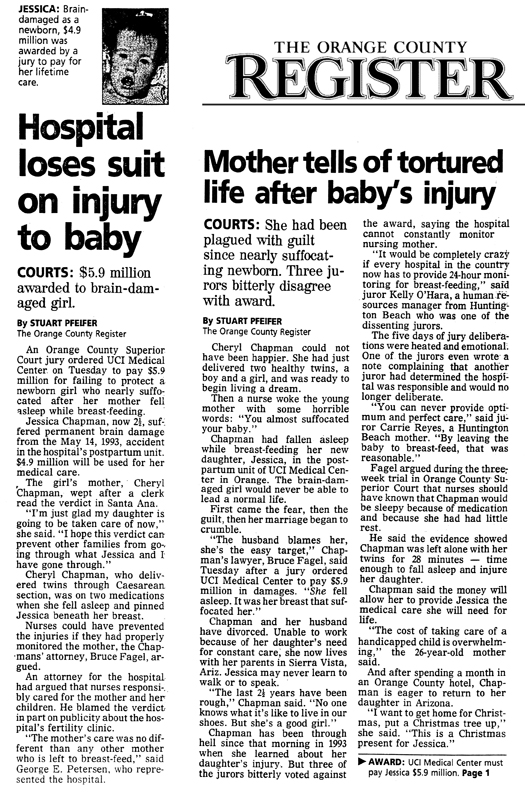 An Orange County Superior Court jury ordered UCI Medical Center on Tuesday to pay $5.9 million for failing to protect a newborn girl who nearly suffocated after her mother fell asleep while breast-feeding.

Jessica Chapman, now 2½, suffered permanent brain damage from the May 14, 1993, accident in the hospital’s postpartum unit. $4.9 million will be used for her medical care.

The girl’s mother, Cheryl Chapman, wept after a clerk read the verdict in Santa Ana.

“I’m just glad my daughter is going to be taken care of now,” she said. “I hope this verdict can prevent other families from going through what Jessica and I have gone through.”

Cheryl Chapman, who delivered twins through Caesarean section, was on two medications when she fell asleep and pinned Jessica beneath her breast.

Nurses could have prevented the injury if they had properly monitored the mother, the Chapman’s attorney, Bruce Fagel, argued.

An attorney for the hospital had argued that nurses responsibly cared for the mother and her children. He blamed the verdict in part on publicity about the hospital’s fertility clinic.

“The mother’s care was no different than any other mother who is left to breast-feed,” said George E. Petersen, who represented the hospital.

Cheryl Chapman could not have been happier. She had just delivered two healthy twins, a boy and a girl, and was ready to begin living a dream.

Then a nurse woke the young mother with some horrible words: “You almost suffocated your baby.”

Chapman had fallen asleep while breast-feeding her new daughter, Jessica, in the postpartum unit of UCI Medical Center in Orange. The brain-damaged girl would never be able to lead a normal life.

First came the fear, then the guilt, then her marriage began to crumble.

“The husband blames her, she’s the easy target,” Chapman’s lawyer, Bruce Fagel, said Tuesday after a jury ordered UCI Medical Center to pay $5.9 million in damages. “She fell asleep. It was her breast that suffocated her.”

Chapman and her husband have divorced. Unable to work because of her daughter’s need for constant care, she now lives with her parents in Sierra Vista, Ariz. Jessica may never learn to walk or to speak.

“The last 2½ years have been rough,” Chapman said. “No one knows what it’s like to live in our shoes. But she’s a good girl.”

Chapman has been through hell since that morning in 1993 when she learned about her daughter’s injury. But three of the jurors bitterly voted against the award, saying the hospital cannot constantly monitor a nursing mother.

“It would be completely crazy if every hospital in the country now has to provide 24-hour monitoring for breast-feeding,” said jury Kelly O’Hara, a human resources manager from Huntington Beach who was one of the dissenting jurors.

The five days of jury deliberations were heated and emotional. One of the jurors even wrote a note complaining that another juror had determined the hospital was responsible and would no longer deliberate.

“You can never provide optimum and perfect care,” said juror Carrie Reyes, a Huntington Beach mother. “By leaving the baby to breast-feed, that was reasonable.”

Fagel argued during the three-week trial in Orange County Superior Court that nurses should have known that Chapman would be sleepy because of medication and because she had had little rest.

He said the evidence showed Chapman was left alone with her twins for 28 minutes — time enough to fall asleep and injure her daughter.

Chapman said the money will allow her to provide Jessica the medical care she will need for life.

“The cost of taking care of a handicapped child is overwhelming,” the 26-year-old mother said.

And after spending a month in an Orange County hotel, Chapman is eager to return to her daughter in Arizona.

“I want to get home for Christmas, put a Christmas tree up,” she said. “This is a Christmas present for Jessica.”