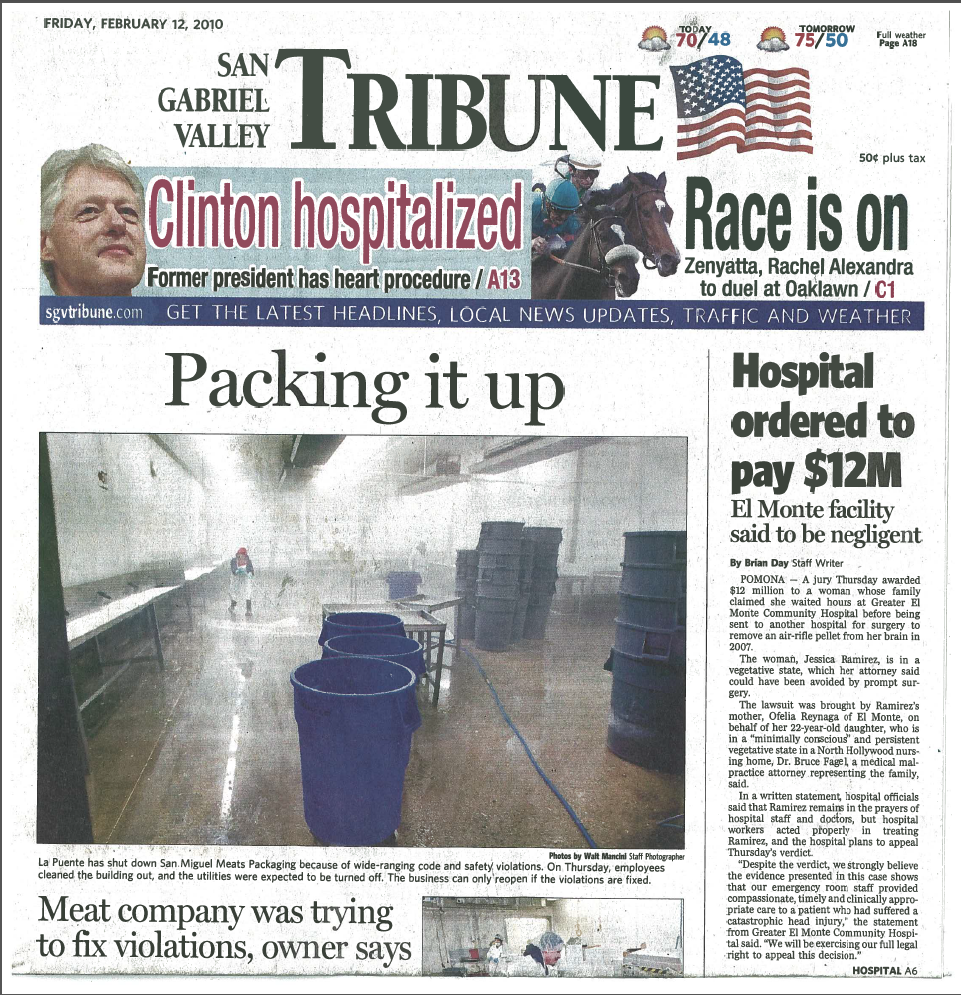 POMONA – A jury Thursday awarded $12 million to a woman whose attorney claimed she waited hours at Greater El Monte Community Hospital before being sent to another hospital for surgery to remove an air-rifle pellet from her brain in 2007.

The woman, Jessica Ramirez, is in a vegetative state, which her attorney said could have been avoided by prompt surgery.

The lawsuit was brought by Ramirez’s mother, Ofelia Reynaga of El Monte, on behalf of her 22-year-old daughter, who is in a “minimally conscious” and persistent vegetative state in a North Hollywood nursing home, Dr. Bruce Fagel, a medical malpractice attorney representing the family, said.

In a written statement, hospital officials said that Ramirez remains in the prayers of hospital staff and doctors, but hospital workers acted properly in treating Ramirez, and the hospital plans to appeal Thursday’s verdict.

“Despite the verdict, we strongly believe the evidence presented in this case shows that our emergency room staff provided compassionate, timely and clinically appropriate care to a patient who had suffered a catastrophic head injury,” the statement from Greater El Monte Community Hospital said. “We will be exercising our full legal right to appeal this decision.”

After being shot in the head with an air gun on Sept. 4, 2007, at a family member’s house in El Monte, Ramirez was conscious and able to seek help, the attorney said.

She walked into the emergency room at Greater El Monte Community Medical Center seeking treatment, the attorney said, however she remained at the hospital for five hours before being flown by helicopter to Huntington hospital in Pasadena, where she was rushed into surgery.

“Employees of (Greater El Monte Community Hospital) delayed in their evaluation of her condition and also delayed in transfer to another hospital after an x-ray showed a bullet in her brain,” Fagel said in a written statement. Fagel is himself a medical doctor who practiced for a decade before entering a law profession.

Jessica Ramirez was not transported to another hospital for surgery until more than five hours after she arrived at Greater El Monte Community Hospital, he said.

A jury reached the verdict after a 15-day trial in Pomona Superior Court, Fagel said.

Court officials said Jessica Ramirez was awarded more than $10.6 million for future medical care, about $373,000 for past medical expenses and $1 million for pain and suffering.

Fagel said the hospital’s insurance carrier refused a settlement officer proposed by a judge for significantly less money than the jury awarded.

“The hospital gambled and lost,” he said.

Fagel said the negligence of Greater El Monte Community Hospital allowed bleeding and pressure on Jessica Ramirez’s brain to cause permanent damage. Because of the brain damage, she now requires 24-hour care.

“Neurosurgeon Ian Ross, MD, who performed surgery on Jessica at (Huntington Hospital) testified that he was certain that Jessica’s outcome would have been better if they had been able to operate sooner,” Fagel said.

Another medical expert testified that earlier surgery would have allowed Jessica Ramirez to care for herself and live independently.

Jessica Ramirez’s mother hopes the money the jury awarded will help her bring her daughter home to live with her, Fagel said.

While the verdict is being appealed, he said, the payment will not be made.

“The damages awarded were clearly to provide sufficient funds for Jessica to go home,” he said. While the verdict is being appealed, “That is all on hold.”

injured, he added. She was studying to be a police officers and volunteered with the

A suspect was charged with attempted murder in the case, Fagel said, “but the charges were not pursued by the (District Attorney’s Office) since Jessica was unable to testify due to her condition. He said he did not know a motive in the attack.

El Monte police detectives who handled the investigation could not be reached for comment Thursday afternoon.