Hospital to Pay $4.15 Million in Injury to Baby

Published in: The San Diego Union-Tribune 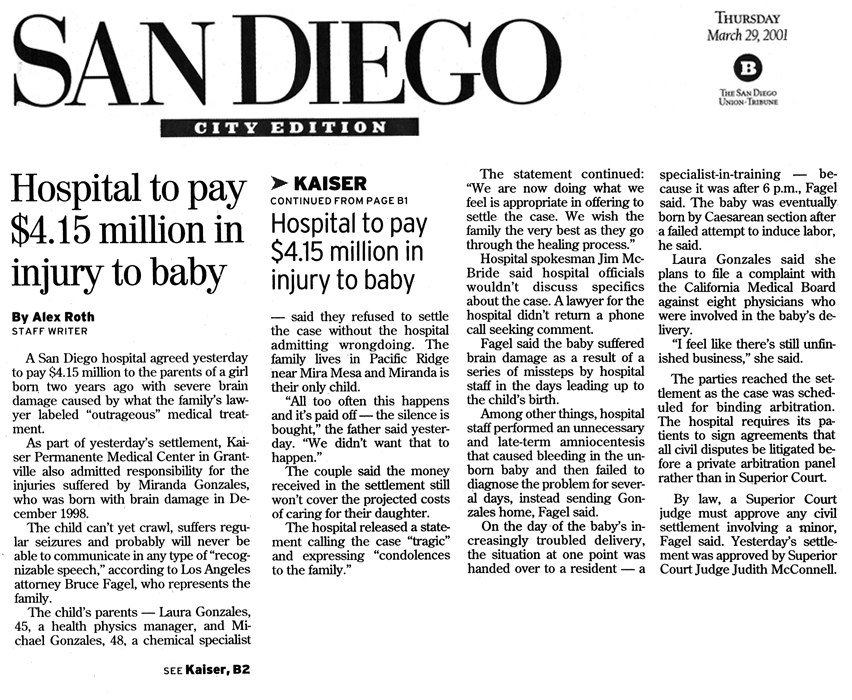 A San Diego hospital agreed yesterday to pay $4.15 million to the parents of a girl born two years ago with severe brain damage caused by what the family’s lawyer labeled “outrageous” medical treatment.

As part of yesterday’s settlement, Kaiser Permanente Medical Center in Grantville also admitted responsibility for the injuries suffered by Miranda Gonzales, who was born with brain damage in December 1998.

The child can’t yet crawl, suffers regular seizures and probably will never be able to communicate in any “recognizable speech,” according to Los Angeles attorney Bruce Fagel, who represents the family.

The child’s parents — Laura Gonzales, 45, a health physics manager, and Michael Gonzales, 48, a chemical specialist — said they refused to settle the case without the hospital admitting wrongdoing. The family lives in Pacific Ridge near Mira Mesa and Miranda is their only child.

“All too often this happens and it’s paid off — the silence is bought,” the father said yesterday. “We didn’t want that to happen.”

The couple said the money received in the settlement still won’t cover the projected costs of caring for their daughter.

The hospital released a statement calling the case “tragic” and expressing “condolences to the family.”

The statement continued: “We are now doing what we feel is appropriate in offering to settle the case. We wish the family the very best as they go through the healing process.”

Fagel said the baby suffered brain damage as a result of a series of missteps by hospital staff in the days leading up to the child’s birth.

Among other things, hospital staff performed an unnecessary and late-term amniocentesis that caused bleeding in the unborn baby and then failed to diagnose the problem for several days, instead sending Gonzales home, Fagel said.

On the day of the baby’s increasingly troubled delivery, the situation at one point was handed over to a resident — a specialist-in-training — because it was after 6 p.m., Fagel said. The baby was eventually born by Caesarean section after a failed attempt to induce labor, he said.

Laura Gonzales said she plans to file a complaint with the California Medical Board against eight physicians who were involved in the baby’s delivery.

“I feel like there’s still unfinished business,” she said.

The parties reached the settlement as the case was scheduled for binding arbitration. The hospital requires its patients to sign agreements that all civil disputes be litigated before a private arbitration panel rather than in Superior Court.