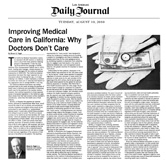 The California Medical Association claims to represent 35,000 doctors in California and is one of the most powerful lobbying groups in Sacramento. It was the moving force behind the passage of MICRA (Medical Injury Compensation Reform Act) in 1975, which, among other changes, limited recovery for non-economic damages for the victims of medical malpractice to $250,000. The California Medical Association has been the major opponent to any discussion about increasing the cap, or at least indexing it to inflation. It even maintains a multimillion-dollar war chest just in case the trial lawyers or the Legislature tries to change MICRA in any way.

The California Medical Association has always portrayed itself to the public as being the guardian of health care in California and committed to improving health care for the patients of its member doctors. However, their political opposition to three separate pieces of proposed legislation in the California Legislature shows that their real concern is their member’s pocketbooks, rather than the health care of their patients.

AB 542, or Hospital Non-payment for Adverse Events, authored by Assemblyman Mike Feuer, would require the state to set up policies and procedures whereby hospitals and surgical clinics would not be reimbursed for care related to a “substantiated” adverse event. It would also prohibit these providers from billing for such an event. This bill is a natural corollary to the California law that identifies 28 “never events,” which all hospitals must report to the California Department of Public Health. Since the law went into effect in 2008, 2,446 such events have been reported, less than 10 percent of which resulted in fines of $4.8 million against 108 hospitals, with $2.9 million collected, and the rest on appeal by the hospitals. There is no data on the un-reported events, and hospitals and physicians are still able to charge for their services regardless of the outcome of that service or the effect on the patient. The reporting requirements for “never events” were designed to reduce the incidence of medical errors by providing a system for investigation and fines to hospitals. But despite some fines for the most egregious errors, by prohibiting hospitals or physicians from collecting fees for negligent care that results in the need for additional medical care, such non-payment would likely be a far greater incentive for hospitals to reduce such errors.

Unfortunately for their patients, physicians in the United States have practiced for over 100 years under a “fee for service” model, where payment is expected regardless of outcome, and even in cases where the outcome is made worse by the care provided. At the beginning of the 20th century, fee-for-service generally meant direct payment by the patient for services billed by physicians or hospitals. After World War II, when health insurance came into wide usage, fee-for-service meant a charge by a physician for a specific service that would then be paid based on the concept of usual and customary charges, and ultimately meant whatever the health insurance company wanted to pay.

But payment was made regardless of outcome, and regardless of whether the care provided actually made the patient’s condition worse. After the identification of 28 “never events,” which is now codified into California law under California Health & Safety Code Section 1279, health insurers, including MediCare and several private insurers began discussing the possibility of withholding payment for care involved with “never events,” including bedsores and retained surgical foreign objects like sponges or towels. Such an action would provide a direct incentive for hospitals to improve care, not just to prevent fines for such negligent care, but to recover the costs for such care. AB 542 would provide the legal basis for insurers to withhold payment for negligent care. For the California Medical Association to oppose such legislation shows that California doctors are more interested in getting paid for their care, even if that care causes preventable injury to their patients.

AB 646, or Physicians and Surgeons Employment, authored by Assemblywoman Sandre Swanson, has implications in the corporate practice of medicine, since it would allow health care districts, hospital and clinics to employ physicians. The bill limits physician employment to rural districts and public and non-profit hospitals serving underserved populations. Obviously, allowing hospitals and clinics to directly employ physicians would make it easier for facilities in rural or underserved areas of California to attract physicians, especially newly trained physicians who may not be able to afford the cost of starting a private practice. The California Medical Association’s opposition to this method of attracting physicians to areas that need them is based on its outdated paranoia about socialized medicine. For years it would not allow physicians employed within the Kaiser system to be members because the Kaiser system represented “socialized medicine” to the die hard advocates of the private practice of medicine. However, now the California Medical Association welcomes the money from such members and finally recognizes that the Kaiser system represents a large group of physician partners who get to share in the profit that the Kaiser system generates each year. But the idea that a nonphysician controlled entity like a hospital district or a non-profit hospital in a small rural county in California would be able to employ physicians directly somehow presents too big a threat to the continuation of the private practice of medicine, despite the positive effect it would have on providing better health care to such underserved areas in California.

AB 832, or Surgical Clinic Licensing, authored by Assemblyman Dave Jones, would require state licensing for all surgical clinics, including those owned by physicians. Currently, physician-owned clinics only need accreditation. The California Medical Association labels this bill as a “dramatic, unnecessary expansion of state oversight of these clinics.” Nothing more dramatically demonstrates the position of California physicians placing their profits over their patient’s health than the California Medical Association’s opposition to this bill. Accreditation is an essentially voluntary method of providing a “seal of approval” that is issued by trade groups that are controlled by physicians. Although all hospitals required licensing, which gives the state and local health authorities to evaluate and monitor the care provided in hospitals, most surgical clinics provide the same services as hospitals for the majority of surgeries performed on patients. But without licensing requirements, state and local health authorities have no jurisdiction over such clinics.

The proliferation of such physician-owned clinics in California has been dramatic in the last 20 years as physicians have sought to control the lucrative elective and nonemergency surgery cases, leaving hospitals with the more expensive (and less reimbursed) emergency and trauma surgery cases. But unlike hospitals, which have staffing and equipment requirements for all surgeries that occur in a hospital setting regardless of the type of surgery, many physician-owned clinics are not much more than extensions of physicians offices where most out-patient same day surgeries are performed without the same staffing or equipment requirements as hospitals. When problems occur, some of these clinics must call 911 to obtain emergency help for their patients, because they do not have the adequate staff or equipment to deal with problems or “adverse events.” Also, the reporting requirements under Health & Safety Code Section 1279 do not extend to such physician-owned clinics and without licensing requirements there is little incentive to improve the quality of care in such clinics. The lack of reporting will also make it difficult for insurers to refuse payment for “never events” that occur outside of a hospital setting.

Since the California Medical Association is such a powerful lobby in Sacramento it is little wonder that these attempts by the state Legislature to propose methods to improve medical care for all patients in California rarely make it into law. But if the public were more aware of the role that physicians play in Sacramento to protect their own finances at the sake of the public’s health, legislators might be more willing to actually pass some of these bills directed at improving health care in California.