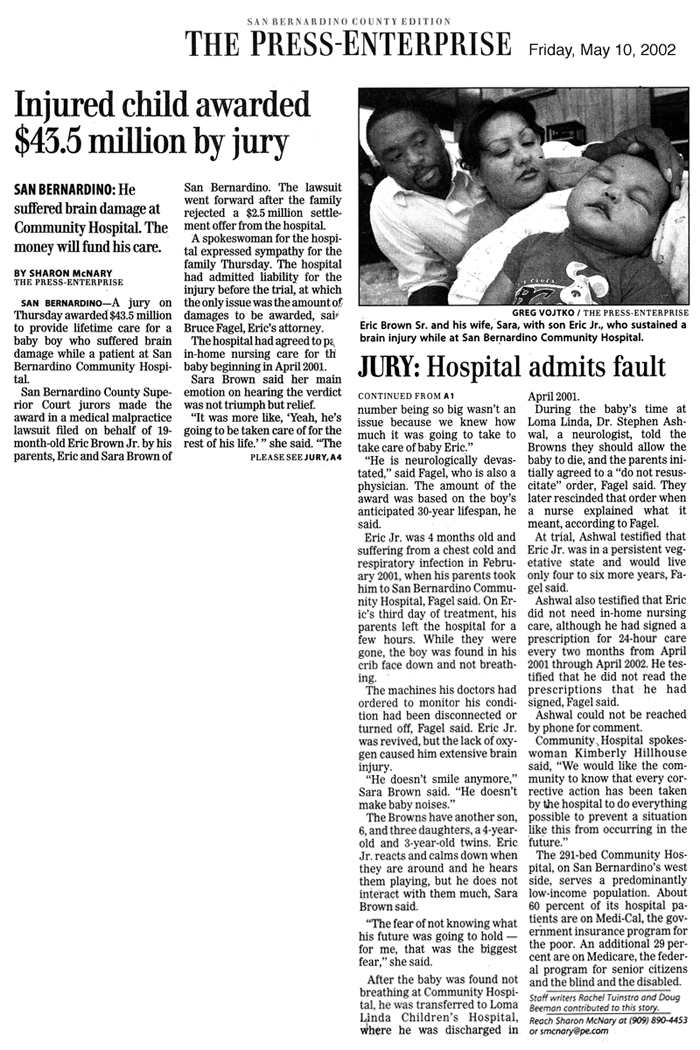 SAN BERNARDINO: He suffered brain damage at Community Hospital. The money will fund his care.

SAN BERNARDINO — A jury on Thursday awarded $43.5 million to provide lifetime care for a baby boy who suffered brain damage while a patient at San Bernardino Community Hospital.

San Bernardino County Superior Court jurors made the award in a medical malpractice lawsuit filed on behalf of the 19-month-old Eric Brown Jr. by his parents, Eric and Sara Brown of San Bernardino. The lawsuit went forward after the family rejected a $2.5 million settlement offer from the hospital.

A spokeswoman from the hospital expressed sympathy for the family Thursday. The hospital had admitted liability for the injury before the trial, at which the only issue was the amount of damages to be awarded, said Bruce Fagel, Eric’s attorney.

The hospital had agreed to pay in-home nursing care for the baby beginning in April 2001.

Sara Brown said her main emotion on hearing the verdict was not triumph but relief. “It’s more like, ‘Yeah, he’s going to be taken care of for the rest of his life,’” she said. “The number being so big wasn’t an issue because we knew how much it was going to take to take care of baby Eric.”

“He is neurologically devastated,” said Fagel, who is also a physician. The amount of the award was based on the boy’s anticipated 30-year lifespan, he said.

Eric Jr. was 4 months old and suffering from a chest cold and respiratory infection in February 2001, when his parents took him to San Bernardino Community Hospital, Fagel said. On Eric’s third day of treatment, his parents left the hospital for a few hours. While they were gone, the boy was found in his crib face down and not breathing.

The machines his doctors had ordered to monitor his condition had been disconnected or turned off, Fagel said. Eric Jr. was revived, but the lack of oxygen caused him extensive brain injury.

“He doesn’t smile anymore,” Sara Brown said. “He doesn’t make baby noises.” The Browns have another son, 6, and three daughters, a 4-year-old and 3-year-old twins. Eric Jr. reacts and calms down when they are around and he hears them playing, but he does not interact with them much, Sara Brown said.

“The fear of not knowing what his future was going to hold — for me, that was the biggest fear,” she said.

After the baby was found not breathing at Community Hospital, he was transferred to Loma Linda Children’s Hospital, where he was discharged in April 2001.

During the baby’s time at Loma Linda, Dr. Stephen Ashwal, a neurologist, told the Browns they should allow the baby to die, and the parents initially agreed to a “do not resuscitate” order, Fagel said. They later rescinded that order when a nurse explained what it meant, according to Fagel.

At trial, Ashwal testified that Eric Jr. was in a persistent vegetative state and would live only four to six more years, Fagel said.

Ashwal also testified that Eric did not need in-home nursing care, although he had signed a prescription for 24-hour care every two months from April 2001 through April 2002. He testified that he did not read the prescriptions that he signed, Fagel said.

Ashwal could not be reached by phone for comment. Community Hospital spokeswoman Kimberly Hillhouse said, “We would like the community to know that every corrective action has been taken by the hospital to do everything possible to prevent a situation like this from occurring in the future.”

Ashwal could not be reached by phone for comment. Community Hospital spokeswoman Kimberly Hillhouse said, “We would like the community to know that every corrective action has been taken by the hospital to do everything possible to prevent a situation like this from occurring in the future.”