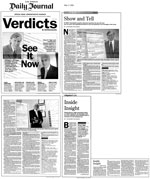 Attorney Bruce Fagel concentrates strictly on medical malpractice. But he has an advantage because he also is a physician and is intimately aware of what goes on in the operating room.

Bruce Fagel has an advantage over other attorneys in medical malpractice cases. He’s seen malpractice first hand. Fagel, a licensed physician who got burned out on medicine and fed up with some of the unethical practices he saw over the years, says the problem with bad doctors is not exaggerated.

“We’re dealing with the tip of the iceberg,” he says. “There have been recent studies demonstrating that preventable injuries in hospitals are much larger than anyone knows.”

Recognizing this, he points out, President Clinton recently urged hospitals and medical associations to reduce patient injuries by 50 percent over the next 10 years. While doctors are finally admitting that problems do occur, “they’ll usually add, ‘But I don’t know of any,'” says Fagel.

Ask Fagel, and he’ll recite a litany of botched procedures, cover-ups and inadequate excuses, including a case he encountered while an intern at an Oak Park, Ill., hospital in 1973. He admitted a woman who had been seriously injured in an auto accident, but couldn’t find anyone to operate on her, so she bled to death.

“I kept promising her that she wouldn’t die. She was bleeding to death from the chest. I stabilized her, but I couldn’t get a thoracic surgeon to work on her,” he recalls. “It was a matter of insurance and an improper backup system.

“The first guy didn’t want to do it, and the second guy was too far away. It was a system failure which today would be the subject of a lawsuit.”

There’s more. While Fagel was assisting during a routine abdominal operation, the surgeon inadvertently cut the patient’s bowel and tried to cover it up.

“He made light of it,” says Fagel. “They kept the patient alive for five or six days. I was off duty one day and he died during the night because they deemed he wasn’t worth saving. I blew up.”

He was also a clinical instructor in the emergency department of Harbor General Hospital in Los Angeles and still teaches an advanced cardiac life-support course for the American Heart Association.

However, by the time he decided to shift gears and attend Whittier College School of Law in Los Angeles in 1980, he had decided he could do more for patients as an attorney than as a doctor.

He graduated in 1982 and opened his own practice, currently located in Beverly Hills with satellites in Sacramento and Orange County. “This has been the most gratifying and productive thing I could have done,” Fagel says. “Being in an adversary position where everything you try to do is challenged is very intellectually intensive. What you did yesterday may not work tomorrow. Things constantly change,” Fagel adds.

Fagel, 53, only handles medical malpractice cases, two thirds of them involving obstetric procedures, such as injuries to children at birth. One such case, first tried in 1991 in Los Angeles Superior Court, has cemented his reputation as an expert in the field of medical malpractice.

The case involved Ashley Hughes, who was paralyzed at birth when a delivery room physician applied forceps the wrong way in removing her from her mother’s womb, and according to Fagel, it received widespread publicity. Fagel alleged that the doctor was under the influence of drugs at the time. So far, the Hughes family has collected half of the judgment, according to Fagel, who still keeps up with the progress of his client, now 13. “She’s a genius,” says Fagel, describing the young girl, who experienced the same debilitating injury as actor Christopher Reeve. Yet, since the age of 3 when she was introduced to computers, she’s been able to attend regular school and gets around in a wheelchair that she controls with a headstick by moving her eyes.

More recently, Fagel won a $5.5 million judgment for a young woman who had undergone breast augmentation surgery, only to lapse into a coma because of an overdose of Lidocaine. In this suit, Fagel claimed that the surgeon, anesthetist and nursing staff of the center where the surgery was performed failed to do anything about the woman’s convulsions, which eventually led to severe brain damage.

“You have to get the jury to understand how doctors and nurses work together and in a particular situation how they don’t, to the point that someone ends up with catastrophic injuries,” Fagel explains. “He’s very adept at bringing in technical medical evidence,” says David O’Keefe of Bonne, Bridges, Mueler, O’Keefe & Nichols of Los Angeles, who has opposed Fagel in a number of cases. “He uses overhead projectors, displays evidence on big screens and brings in mockups and models if necessary – a lot of visual graphics,” continues O’Keefe.

“He has a very thorough grasp of medicine. He has a good facility for dealing with a lot of technical, medical facts without having to refer to notes or hesitate during his presentation,” O’Keefe adds. As an expert in his field, Fagel has lectured widely on medical malpractice to obstetric societies and other physician groups as well as attorneys. He’s also been nominated as Trial Lawyer of the Year three times by the Los Angeles Trial Lawyers Association. He and his wife Trudy, who manages the practice, have three children. Their oldest, Devon, 23, attends Southwestern Law School.

One of the toughest things to get across during a trial is what can happen in a crisis, according to Fagel. “It’s a high-intensity situation in a delivery room, where things change rapidly, or in the emergency room,” says Fagel. “To explain that to a jury, you need to know more than the medicine involved.”

Indeed, he says, that’s part of the fun of being a lawyer. “I couldn’t do that as a doctor,” he says. “I might have been involved in something first-hand, but I couldn’t tell anyone about it.”