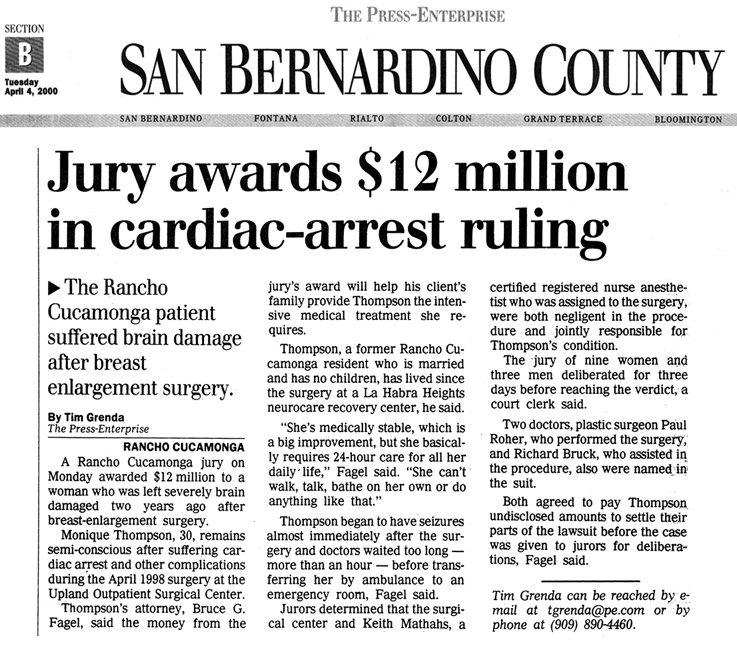 A Rancho Cucamonga jury on Monday awarded $12 million to a woman who was left severely brain damaged two years ago after breast-enlargement surgery.

Monique Thompson, 30, remains semi-conscious after suffering cardiac arrest and other complications during the April 1998 surgery at the Upland Outpatient Surgical Center.

Thompson, a former Rancho Cucamonga resident who is married and has no children, has lived since the surgery at a La Habra Heights neurocare recovery center, he said. “She’s medically stable, which is a big improvement, but she basically requires 24-hour care for all her daily life,” Fagel said. “She can’t walk, talk, bathe on her own or do anything like that.”

Thompson began to have seizures almost immediately after the surgery and doctors waited too long — more than an hour — before transferring her by ambulance to an emergency room, Fagel said.

Jurors determined that the surgical center and Keith Mathahs, a certified nurse anesthetist who was assigned to the surgery, were both negligent in the procedure and jointly responsible for Thompson’s condition.

The jury of nine women and three men deliberated for three days before reaching the verdict, a court clerk said.

Two doctors, plastic surgeon Paul Roher, who performed the surgery, and Richard Bruck, who assisted in the procedure, also were named in the suit.

Both agreed to pay Thompson undisclosed amounts to settle their parts of the lawsuit before the case was given to jurors for deliberations, Fagel said.