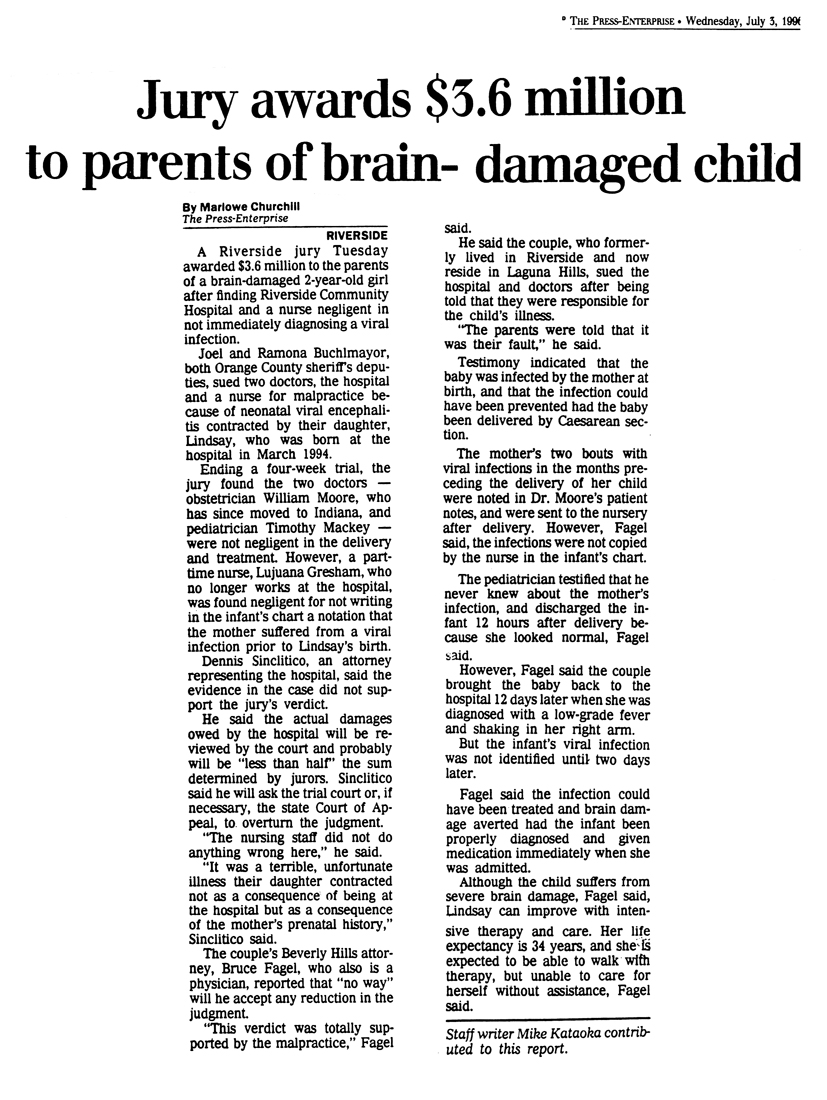 Jury awards $3.6 million to parents of brain-damaged child
By Marlowe Churchill
The Press-Enterprise

RIVERSIDE — A Riverside jury Tuesday awarded $3.6 million to the parents of a brain-damaged 2-year-old girl after finding Riverside Community Hospital and a nurse negligent in not immediately diagnosing a viral infection.

Joel and Ramona Buchlmayor, both Orange County sheriff’s deputies, sued two doctors,the hospital and a nurse for malpractice because of neonatal viral encephalitis contracted by their daughter, Lindsay, who was born at the hospital in March 1994.

Ending a four-week trial, the jury found the two doctors — obstetrician William Moore, who has since moved to Indiana, and pediatrician Timothy Mackey — were not negligent in the delivery and treatment. However, a part-time nurse, Lujuana Gresham, who no longer works at the hospital, was found negligent for not writing in the infant’s chart a notation that the mother suffered from a viral infection prior to Lindsay’s birth.

Dennis Sinclitico, an attorney representing the hospital, said the evidence in the case did not support the jury’s verdict.

He said the actual damages owed by the hospital will be reviewed by the court and probably will be “less than half” the sum determined by jurors. Sinclitico said he will ask the trial court or, if necessary, the state Court of Appeal, to overturn the judgment.

“The nursing staff did not do anything wrong here,” he said.

The couple’s Beverly Hills attorney, Bruce Fagel, who also is a physician, reported that “no way” will he accept any reduction in the judgment.

“This verdict was totally supported by the malpractice,” Fagel said.

He said the couple, who formerly lived in Riverside and now reside in Laguna Hills, sued the hospital and doctors after being told that they were responsible for the child’s illness.

“The parents were told that it was their fault,” he said.

Testimony indicated that the baby was infected by the mother at birth, and that the infection could have been prevented had the baby been delivered by Caesarean section.

The mother’s two bouts with viral infections in the months preceding the delivery of her child were noted in Dr. Moore’s patient notes, and were sent to the nursery after delivery.

However, Fagel said, the infections were not copied by the nurse in the infant’s chart.

The pediatrician testified that he never knew about the mother’s infection, and discharged the infant 12 hours after delivery because she looked normal, Fagel said.

However, Fagel said the couple brought the baby back to the hospital 12 days later when she was diagnosed with a low-grade fever and shaking in her right arm.

But the infant’s viral infection was not identified until two days later.

Fagel said the infection could have been treated and brain damage averted had the infant been properly diagnosed and given medication immediately when she was admitted.

Although the child suffers from severe brain damage, Fagel said, Lindsay can improve with intensive therapy and care. Her life expectancy is 34 years, and she is expected to be able to walk with therapy, but unable to care for herself without assistance, Fagel said.