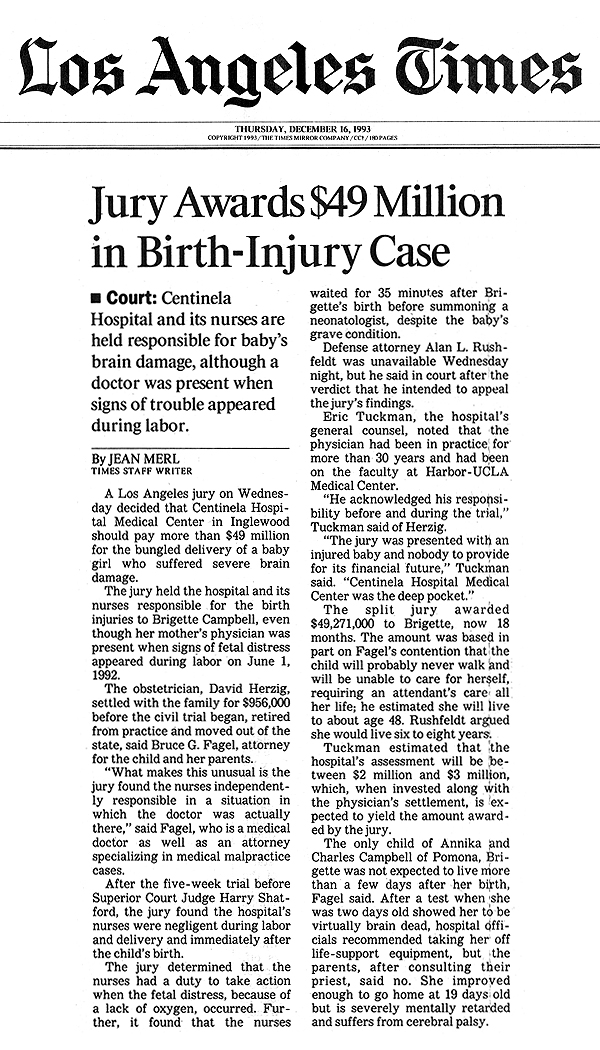 Court: Centinela Hospital and its nurses are held responsible for baby’s brain damage, although a doctor was present when signs of trouble appeared during labor.

A Los Angeles jury on Wednesday decided that Centinela Hospital Medical Center in Inglewood should pay more than $49 million for the bungled delivery of a baby girl who suffered severe brain damage.

The jury held the hospital and its nurses responsible for the birth injuries to Brigette Campbell, even though her mother’s physician was present when signs of fetal distress appearedduring labor on June 1, 1992.

The obstetrician, David Herzig, settled with the family for $956,000 before the civil trial began, retired from practice and moved out of the state, said Bruce G. Fagel, attorney for the child and her parents.

“What makes this unusual is the jury found the nurses independently responsible in a situation in which the doctor was actually there,” said Fagel, who is a medical doctor as well as an attorney specializing in medical malpractice cases.

After the five-week trial before Superior Court Judge Harry Shatford, the jury found the hospital’s nurses were negligent during labor and delivery and immediately after the child’s birth.

The jury determined that the nurses had a duty to take action when the fetal distress, because of lack of oxygen, occurred. Further, it found that the nurses waited for 35 minutes after Brigette’s birth before summoning a neonatologist, despite the baby’s grave condition.

Defense attorney Alan L. Rushfeldt was unavailable Wednesday night, but he said in court after the verdict that he intended to appeal the jury’s findings.

Eric Tuckman, the hospital’s general counsel, noted that the physician had been in practice for more than 30 years and had been on the faculty at Harbor-UCLA Medical Center.

“He acknowledged his responsibility before and during the trial,” Tuckman said of Herzig.

“The jury was presented with an injured baby and nobody to provide for its financial future,” Tuckman said. “Centinela Hospital Medical Center was the deep pocket.”

The split jury awarded $49,271,000 to Brigette, now 18 months. The amount was based in part on Fagel’s contention that the child will probably never walk and will be unable to care for herself, requiring an attendant’s care all her life; he estimated she will live to be about age 48. Rushfeldt argued she would live six to eight years.

Tuckman estimated that the hospital’s assessment will be between $2 million and $3 million, which, when invested along with the physician’s settlement, is expected to yield the amount awarded by the jury.

The only child of Annika and Charles Campbell of Pomona, Brigette was not expected to live more than a few days after her birth, Fagel said.

After a test when she was two days old showed her to be virtually brain dead, hospital officials recommended taking her off life-support equipment, but the parents, after consulting their priest, said no. She improved enough to go home at 19 days old but is severely mentally retarded and suffers from cerebral palsy.