Published in: The Antelope Valley Times 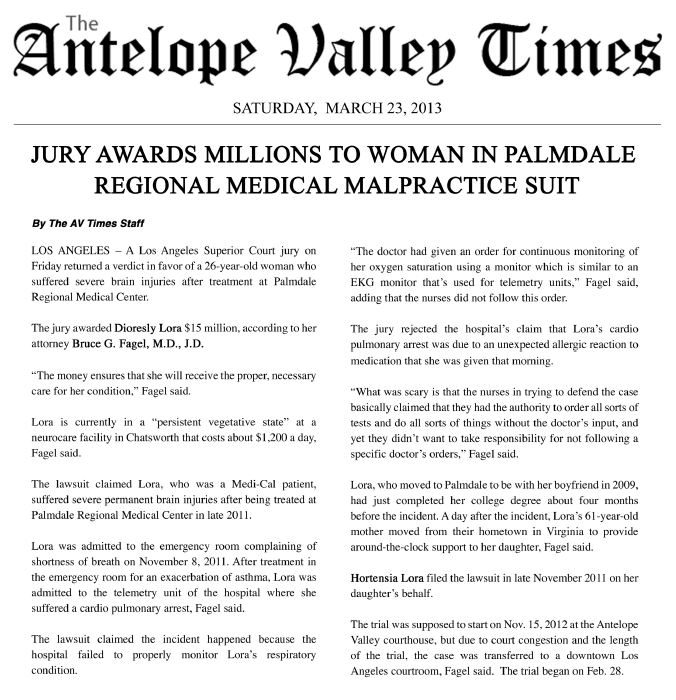 By The AV Times Staff

“The money ensures that she will receive the proper, necessary care for her condition,” Fagel said.

Lora is currently in a “persistent vegetative state” at a neurocare facility in Chatsworth that costs about $1,200 a day, Fagel said.

The lawsuit claimed Lora, who was a Medi-Cal patient, suffered severe permanent brain injuries after being treated at Palmdale Regional Medical Center in late 2011.

The lawsuit claimed the incident happened because the hospital failed to properly monitor Lora’s respiratory condition.

“The doctor had given an order for continuous monitoring of her oxygen saturation using a monitor which is similar to an EKG monitor that’s used for telemetry units,” Fagel said, adding that the nurses did not follow this order.

The jury rejected the hospital’s claim that Lora’s cardio pulmonary arrest was due to an unexpected allergic reaction to medication that she was given that morning.

“What was scary is that the nurses in trying to defend the case basically claimed that they had the authority to order all sorts of tests and do all sorts of things without the doctor’s input, and yet they didn’t want to take responsibility for not following a specific doctor’s orders,” Fagel said.

Lora, who moved to Palmdale to be with her boyfriend in 2009, had just completed her college degree about four months before the incident. A day after the incident, Lora’s 61-year-old mother moved from their hometown in Virginia to provide around-the-clock support to her daughter, Fagel said.

Hortensia Lora filed the lawsuit in late November 2011 on her daughter’s behalf.

The trial was supposed to start on Nov. 15, 2012 at the Antelope Valley courthouse, but due to court congestion and the length of the trial, the case was transferred to a downtown Los Angeles courtroom, Fagel said. The trial began on Feb. 28.

Bruce G. Fagel, M.D., graduated from the Univ. of Ill. (1972), and was li­censed to practice medicine: Illinois, 1973; California 1975. He received his JD at Whittier College (1982). Dr. Fagel is a regularly in­vited speaker before organi­zations of attorneys, physicians, and hospitals internationally, and has been interviewed by CBS, ABC, NBC and various media affiliates. Featured in “The Best Lawyers in America, 2007,” he has been an eight-time nominee by Consumer Attorneys Association for Trial Lawyer of the Year and recently featured in the National Law Journal as “The 10 Best Trial Attorneys in the Nation”. Dr. Fagel has au­thored various articles on medical-malpractice issues and served as a consultant on medical-malpractice law to the California Judicial Counsel Committee, which wrote the new CACI jury instructions (California Approved Civil Instructions).