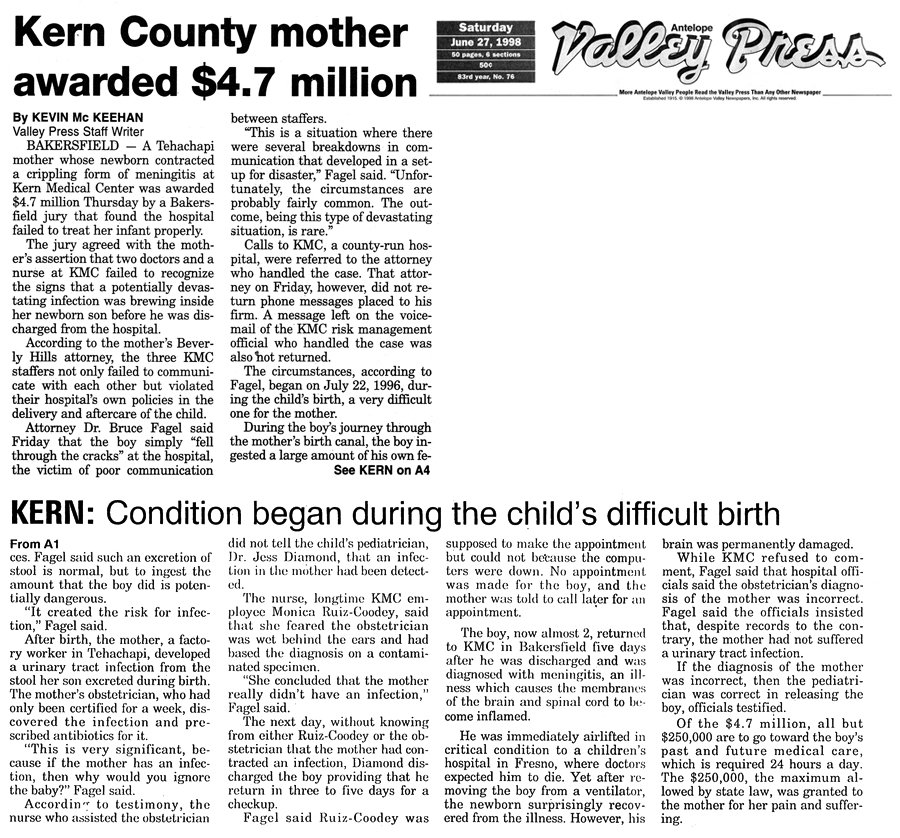 BAKERSFIELD — A Tehachapi mother whose newborn contracted a crippling form of meningitis at Kern Medical Center was awarded $4.7 million Thursday by a Bakersfield jury that found the hospital failed to treat her infant properly.

The jury agreed with the mother’s assertion that two doctors and a nurse at KMC failed to recognize the signs that a potentially devastating infection was brewing inside her newborn son before he was discharged from the hospital.

According to the mother’s Beverly Hills attorney, the three KMC staffers not only failed to communicate with each other but violated their hospital’s own policies in the delivery and aftercare of the child.

Attorney Dr. Bruce Fagel said Friday that the boy simply “fell through the cracks” at the hospital, the victim of poor communication between staffers.

“This is a situation where there were several breakdowns in communication that developed in a setup for a disaster,” Fagel said. “Unfortunately, the circumstances are probably fairly common. The outcome, being this type of devastating situation, is rare.”

The circumstances, according to Fagel, began on July 22, 1996, during the child’s birth, a very difficult one for the mother.

During the boy’s journey through the mother’s birth canal, the boy ingested a large amount of his own feces. Fagel said such an excretion of stool is normal, but to ingest the amount that the boy did is potentially dangerous.

“It created the risk for infection,” Fagel said.

After birth, the mother, a factory worker in Tehachapi, developed a urinary tract infection from the stool her son excreted during birth. The mother’s obstetrician, who had only been certified for a week, discovered the infection and prescribed antibiotics for it.

“This is very significant, because if the mother has an infection, then why would you ignore the baby?” Fagel said.

According to testimony, the nurse who assisted the obstetrician did not tell the child’s pediatrician, Dr. Jess Diamond, that an infection in the mother had been detected.

The nurse, longtime KMC employee Monica Ruiz-Coodey, said that she feared the obstetrician was wet behind the ears and had based the diagnosis on a contaminated specimen.

“She concluded that the mother really didn’t have an infection,” Fagel said. The next day, without knowing from either Ruiz-Coodey or the obstetrician that the mother had contracted an infection, Diamond discharged the boy providing that he return in three to five days for a checkup.

Fagel said Ruiz-Coodey was supposed to make the appointment but could not because the computers were down. No appointment was made for the boy, and the mother was told to call later for an appointment.

The boy, now almost 2, returned to KMC in Bakersfield five days after he was discharged and was diagnosed with meningitis, an illness which causes the membranes of the brain and spinal cord to become inflamed.

He was immediately airlifted in critical condition to a children’s hospital in Fresno, where doctors expected him to die. Yet after removing the boy from a ventilator, the newborn surprisingly recovered from the illness. However, his brain was permanently damaged.

While KMC refused to comment, Fagel said that hospital officials said the obstetrician’s diagnosis of the mother was incorrect. Fagel said the officials insisted that, despite records to the contrary, the mother had not suffered a urinary tract infection.

If the diagnosis of the mother was incorrect, then the pediatrician was correct in releasing the boy, officials testified.