Published in: The Bakersfield Californian 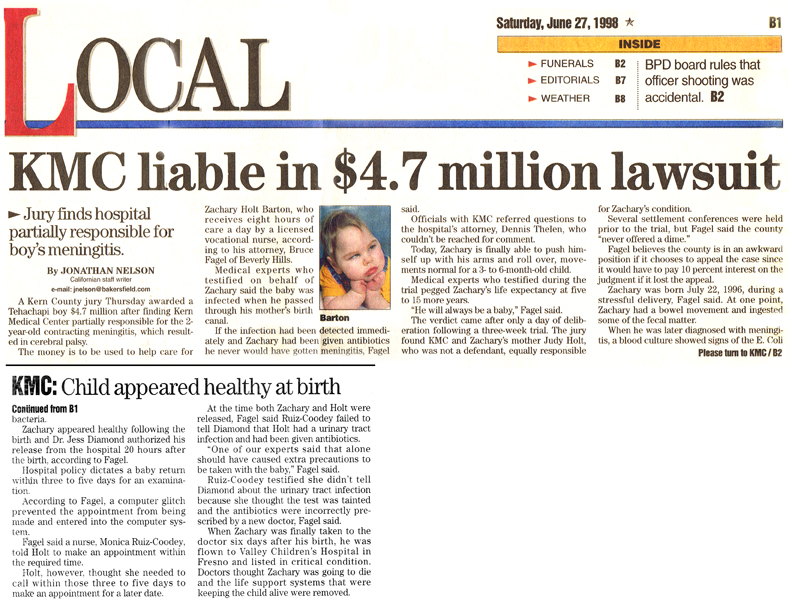 The money is to be used to help care for Zachary Holt Barton, who receives eight hours of care a day by a licensed vocational nurse, according to his attorney, Bruce Fagel of Beverly Hills.

Medical experts who testified on behalf of Zachary said the baby was infected when he passed through his mother’s birth canal.

If the infection had been detected immediately and Zachary had been given antibiotics he never would have gotten meningitis, Fagel said.

Officials with KMC referred questions to the hospital’s attorney, Dennis Thelen, who couldn’t be reached for comment.

Today, Zachary is finally able to push himself up with his arms and roll over, movements normal for a 3- to 6-month-old child.

Medical experts who testified during the trial pegged Zachary’s life expectancy at five to 15 more years. “He will always be a baby,” Fagel said.

The verdict came after only a day of deliberation following a three-week trial. The jury found KMC and Zachary’s mother Judy Holt, who was not a defendant, equally responsible for Zachary’s condition.

Several settlement conferences were held prior to the trial, but Fagel said the county “never offered a dime.”

Fagel believes the county is in an awkward position if it chooses to appeal the case since it would have to pay 10 percent interest on the judgment if it lost the appeal.

Zachary was born July 22, 1996, during a stressful delivery, Fagel said. At one point, Zachary had a bowel movement and ingested some of the fecal matter. When he was later diagnosed with meningitis, a blood culture showed signs of the E. Coli bacteria.

Zachary appeared healthy following the birth and Dr. Jess Diamond authorized his release from the hospital 20 hours after the birth, according to Fagel. Hospital policy dictates a baby return within three to five days for an examination.

According to Fagel, a computer glitch prevented the appointment from being made and entered into the computer system.

Fagel said a nurse, Monica Ruiz-Coodey, told Holt to make an appointment within the required time.

Holt, however, thought she needed to call within those three to five days to make an appointment for a later date.

At the time both Zachary and Holt were released, Fagel said Ruiz-Coodey failed to tell Diamond that Holt had a urinary tract infection and had been given antibiotics.

“One of our experts said that alone should have caused extra precautions to be taken with the baby,” Fagel said.

Ruiz-Coodey testified she didn’t tell Diamond about the urinary tract infection because she thought the test was tainted and the antibiotics were incorrectly prescribed by a new doctor, Fagel said.

When Zachary was finally taken to the doctor six days after his birth, he was flown to Valley Children’s Hospital in Fresno and listed in critical condition. Doctors thought Zachary was going to die and the life support systems that were keeping the child alive were removed.