Legislators Should up Damages Cap to Improve Patient Care 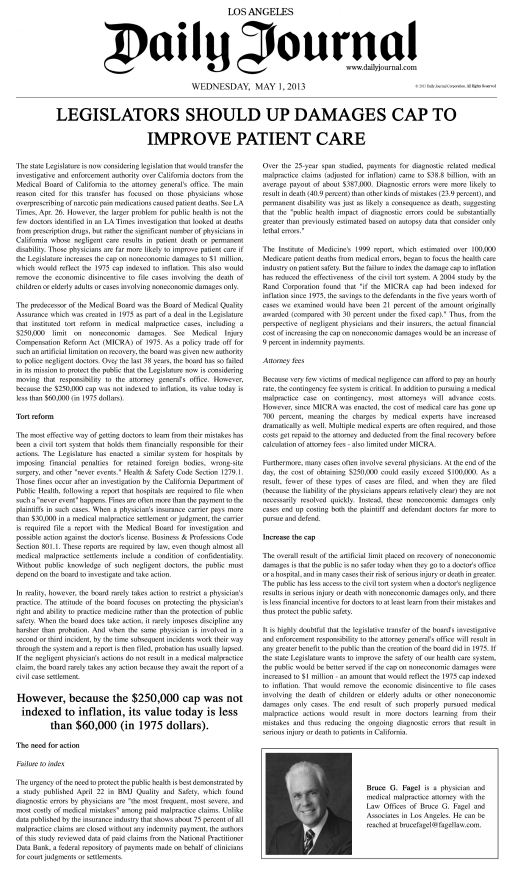 Legislators should up damages cap to improve patient care

The state Legislature is now considering legislation that would transfer the investigative and enforcement authority over California doctors from the Medical Board of California to the attorney general’s office.

The main reason cited for this transfer has focused on those physicians whose overprescribing of narcotic pain medications caused patient deaths. See LA Times, Apr. 26.

However, the larger problem for public health is not the few doctors identified in an LA Times investigation that looked at deaths from prescription drugs, but rather the significant number of physicians in California whose negligent care results in patient death or permanent disability. Those physicians are far more likely to improve patient care if the Legislature increases the cap on noneconomic damages to $1 million, which would reflect the 1975 cap indexed to inflation. This also would remove the economic disincentive to file cases involving the death of children or elderly adults or cases involving noneconomic damages only.

in medical malpractice cases, including a $250,000 limit on noneconomic damages.

See Medical Injury Compensation Reform Act (MICRA) of 1975. As a policy trade off for such an artificial limitation on recovery, the board was given new authority to police negligent doctors. Over the last 38 years, the board has so failed in its mission to protect the public that the Legislature now is considering moving that responsibility to the attorney general’s office. However, because the $250,000 cap was not indexed to inflation, its value today is less than $60,000 (in 1975 dollars).

Tort reform The most effective way of getting doctors to learn from their mistakes has been a civil tort system that holds them financially responsible for their actions. The Legislature has enacted a similar system for hospitals by imposing financial penalties for retained foreign bodies, wrong-site surgery, and other “never events.”

Health & Safety Code Section 1279.1. Those fines occur after an investigation by the California Department of Public Health, following a report that hospitals are required to file when such a “never event” happens. Fines are often more than the payment to the plaintiffs in such cases. When a physician’s insurance carrier pays more than $30,000 in a medical malpractice settlement or judgment, the carrier is required file a report with the Medical Board for investigation and possible action against the doctor’s license.

Business & Professions Code Section 801.1. These reports are required by law, even though almost all medical malpractice settlements include a condition of confidentiality.

Without public knowledge of such negligent doctors, the public must depend on the board to investigate and take action.In reality, however, the board rarely takes action to restrict a physician’s practice. The attitude of the board focuses on protecting the physician’s right and ability to practice medicine rather than the protection of public safety. When the board does take action, it rarely imposes discipline any harsher than probation. And when the same physician is involved in a second or third incident, by the time subsequent incidents work their way through the system and a report is then filed, probation has usually lapsed. If the negligent physician’s actions do not result in a medical malpractice claim, the board rarely takes any action because they await the report of a civil case settlement.

However, because the $250,000 cap was not indexed to inflation, its value today is less than $60,000 (in 1975 dollars). The need for action Failure to index The urgency of the need to protect the public health is best demonstrated by a study published April 22 in BMJ Quality and Safety, which found diagnostic errors by physicians are “the most frequent, most severe, and most costly of medical mistakes” among paid malpractice claims. Unlike data published by the insurance industry that shows about 75 percent of all malpractice claims are closed without any indemnity payment, the authors of this study reviewed data of paid claims from the National Practitioner Data Bank, a federal repository of payments made on behalf of clinicians for court judgments or settlements.

Over the 25-year span studied, payments for diagnostic related medical malpractice claims (adjusted for inflation) came to $38.8 billion, with an average payout of about $387,000. Diagnostic errors were more likely to result in death (40.9 percent) than other kinds of mistakes (23.9 percent), and permanent disability was just as likely a consequence as death, suggesting that the “public health impact of diagnostic errors could be substantially greater than previously estimated based on autopsy data that consider only lethal errors.”

The Institute of Medicine’s 1999 report, which estimated over 100,000 Medicare patient deaths from medical errors, began to focus the health care industry on patient safety. But the failure to index the damage cap to inflation has reduced the effectiveness of the civil tort system. A 2004 study by the Rand Corporation found that “if the MICRA cap had been indexed for inflation since 1975, the savings to the defendants in the five years worth of cases we examined would have been 21 percent of the amount originally awarded (compared with 30 percent under the fixed cap).”

Thus, from the perspective of negligent physicians and their insurers, the actual financial cost of increasing the cap on noneconomic damages would be an increase of 9 percent in indemnity payments. Attorney fees Because very few victims of medical negligence can afford to pay an hourly rate, the contingency fee system is critical. In addition to pursuing a medical malpractice case on contingency, most attorneys will advance costs. However, since MICRA was enacted, the cost of medical care has gone up 700 percent, meaning the charges by medical experts have increased dramatically as well. Multiple medical experts are often required, and those costs get repaid to the attorney and deducted from the final recovery before calculation of attorney fees – also limited under MICRA.

Furthermore, many cases often involve several physicians. At the end of the day, the cost of obtaining $250,000 could easily exceed $100,000. As a result, fewer of these types of cases are filed, and when they are filed (because the liability of the physicians appears relatively clear) they are not necessarily resolved quickly. Instead, these noneconomic damages only cases end up costing both the plaintiff and defendant doctors far more to pursue and defend.

Increase the cap The overall result of the artificial limit placed on recovery of noneconomic damages is that the public is no safer today when they go to a doctor’s office or a hospital, and in many cases their risk of serious injury or death in greater. The public has less access to the civil tort system when a doctor’s negligence results in serious injury or death with noneconomic damages only, and there is less financial incentive for doctors to at least learn from their mistakes and thus protect the public safety.

It is highly doubtful that the legislative transfer of the board’s investigative and enforcement responsibility to the attorney general’s office will result in any greater benefit to the public than the creation of the board did in 1975. If the state Legislature wants to improve the safety of our health care system, the public would be better served if the cap on noneconomic damages were increased to $1 million – an amount that would reflect the 1975 cap indexed to inflation. That would remove the economic disincentive to file cases involving the death of children or elderly adults or other noneconomic damages only cases. The end result of such properly pursued medical malpractice actions would result in more doctors learning from their mistakes and thus reducing the ongoing diagnostic errors that result in serious injury or death to patients in California.

Bruce G. Fagel is a physician and medical malpractice attorney with the Law Offices of Bruce G. Fagel and Associates in Los Angeles. He can be reached at