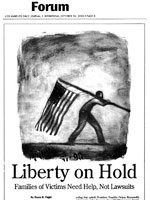 Liberty on Hold
Families of Victims Need Help, Not Lawsuits

In the coming months, there will be a growing debate about changing our civil and criminal justice system in response to the events of Sept. 11. Amid these concerns, some attorneys and civil libertarians argue that we, as attorneys, should stand up to oppose any changes that Congress and the president may propose, especially those that affect our basic freedoms.

Although several groups, such as the American Civil Liberties Union and criminal-justice associations, have warned about the erosion of our liberties in terms of search and seizure and free speech, it is highly notable that the American Trial Lawyers Association was the first to propose to its membership that we institute a national ban on any lawsuits seeking compensation for victims of the Sept. 11 terrorist massacre.

The association later followed up with support for President George W. Bush’s proposal for immediate compensation for all victims of this national tragedy in exchange for a limitation of any lawsuits. This action against economic self-interest should be hailed not only by the legal profession but also by the public. All attorneys should recognize that the public attitude toward attorneys is but one of many areas of public opinion that may change as a result of a new national focus on this terrorist threat.

Despite several highly publicized police-brutality cases in recent years in New York City, the events of Sept. 11 have transformed public opinion overnight. Now, the New York police are regarded as the epitome of true American heroes. I doubt that we will see very many police-brutality cases going to trial in any major American city in the next few years.

The entertainment industry, which for years has resisted government regulation on First Amendment free-speech grounds, has changed direction and canceled or drastically altered many projects at great cost. The public also will be watching lawyers as these legal issues are debated. Now is the time for lawyers to show a self-interest other than money. All lawyers should follow the lead of the association.

To do so, we must recognize and accept the basic and fundamental change that occurred in the United States as a result of Sept. 11. Anyone who has traveled in Europe during the past few years would instantly notice the major difference between European and American airports. In Europe, there is no curbside check-in, the security check-in is performed by armed government agents, and police and military with automatic weapons routinely patrol every part of the airport.

These measures were instituted in countries that consider themselves as free and democratic as the United States. But they were taken because Europe went through its own series of terrorist hijackings of planes and other terrorist actions in the 1970s. It is unfortunate that the American public requires an act like Sept. 11 to mobilize public opinion to recognize this great threat and be willing to sacrifice some of our freedom for security.

It took Dec. 7, 1941, to change American public opinion overnight from isolationism to a war fervor against Japan and Germany. Even though war in Europe had been going on for more than two years, it took almost another four years for the United States to win that war.

It should be remembered that the U.S. Supreme Court ruling that upheld President Franklin Delano Roosevelt’s internment order for more than 100,000 Japanese-Americans was written by Justice William O. Douglas, one of the greatest civil libertarians who ever served on the court.

But Douglas like our Founders, who passed the Alien and Sedition Act very early in our nation’s existence, recognized that, when our nation is threatened with destruction, civil liberties must be postponed. The Alien and Sedition Act later was repealed by Congress when the nation felt safer, and Congress finally did approve compensation for the victims and heirs of those interned Japanese-Americans.

We as a nation must be willing to recognize the need to postpone some of our civil liberties, including our basic right to sue and seek compensation for injuries, as long as those liberties are restored later. Congress did this when it approved Abraham Lincoln’s suspension of the writ of habeas corpus during the Civil War.

The victims of Sept. 11 need immediate help and financial security. Our government is far better able than the American civil justice system to provide such immediate compensation to the victims of Sept. 11, including the children, mothers, fathers, sisters, brothers and other relatives of the 6,000 people killed.

The scope of the tragedy and the need for immediate compensation are higher than for any other event in American history. It has surprised most Americans that the number of people killed in the attack on the World Trade Center is more than 21/2 times the number killed in the Japanese attack on Pearl Harbor.

Also, our civil justice system requires proof of fault before compensation can be paid. In the “traditional” airline crash situation, a lawsuit would be filed against the airline, the airplane manufacturer and possibly others, and discovery would go on for years before trial or settlement.

If all of the victims of Sept. 11 were to file claims, the result would not only strangle a significant part of our civil justice system but also threaten the immediate bankruptcy of United Airlines, American Airlines and Boeing Aircraft (our two largest national airlines and our largest aircraft manufacturer). Such a move would stay any lawsuits and would further delay needed compensation for victims and their families. To forestall bankruptcy, the airline industry has cut 100,000 jobs despite $5 million in cash and a larger amount in loan guarantees from the federal government.

Also, any effort to conduct discovery would delay drastically any security changes or rebuilding efforts that need to be done by companies and individuals who otherwise would be involved in such discovery. There is plenty of time later to conduct such discovery and assess blame.

I strongly suspect that, when full discovery is completed, we will discover that the fault for the events of Sept. 11 lies with all of us as a society. We like the convenience of air travel and for years have laughed at the “security” checkpoints at airports. Numerous television undercover and government investigations have failed to stir any public interest in improving security at our airports.

In a very real sense, these terrorists have used what is best about America – our freedoms – against us. We have to recognize that, for a while, whether for the four years it took us to win World War II or the eight years it took to win our independence from England in the Revolutionary War, or longer, we have to live in a less-free society in order to survive and exist into the next century. If the American public is willing to accept restrictions on our freedom and other sacrifices, we as lawyers should be willing to accept the same restrictions.