Published in: Consumer Attorneys Of California 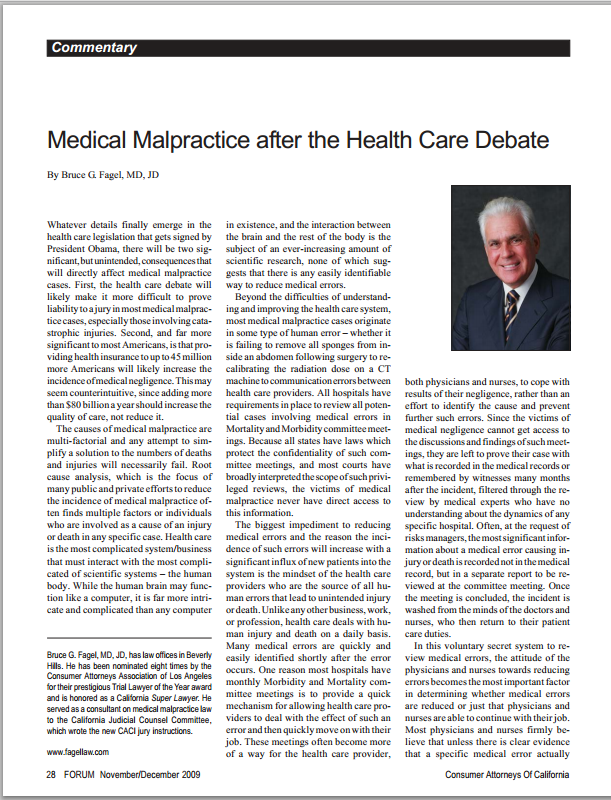 +Whatever details fmally emerge in the health care legislation that gets signed by President Obama, there will be two significant, but unintended, consequences that will directly affect medical malpractice cases. First, the health care debate will likely make it more difficult to prove liability to a jury in most medical malpractice cases, especially those involving catastrophic injuries. Second, and far more significant to most Americans, is that providing health insurance to up to 45 million more Americans will likely increase the incidence ofmedical negligence. This may seem counterintuitive, since adding more than $80 billion a year should increase the quality of care, not reduce it.

The causes of medical malpractice are multi-factorial and any attempt to simplify a solution to the numbers of deaths and injuries will necessarily fail. Root cause analysis, which is the focus of many public and private efforts to reduce the incidence of medical malpractice often finds multiple factors or individuals who are involved as a cause of an injury or death in any specific case. Health care is the most complicated system/business that must interact with the most complicated of scientific systems — the human body. While the human brain may function like a computer, it is far more intricate and complicated than any computer in existence, and the interaction between the brain and the rest of the body is the subject of an ever-increasing amount of scientific research, none of which suggests that there is any easily identifiable way to reduce medical errors.

Beyond the difficulties of understanding and improving the health care system, most medical malpractice cases originate in some type of human error — whether it is failing to remove all sponges from inside an abdomen following surgery to re-calibrating the radiation dose on a CT machine to communication errors between health care providers. All hospitals have requirements in place to review all potential cases involving medical errors in Mortality and Morbidity committee meetings. Because all states have laws which protect the confidentiality of such com-mittee meetings, and most courts have broadly interpreted the scope of such privileged reviews, the victims of medical malpractice never have direct access to this information.

The biggest impediment to reducing medical errors and the reason the incidence of such errors will increase with a significant influx of new patients into the system is the mindset of the health care providers who are the source of all human errors that lead to unintended injury or death. Unlike any other business, work, or profession, health care deals with human injury and death on a daily basis. Many medical errors are quickly and easily identified shortly after the error occurs. One reason most hospitals have monthly Morbidity and Mortality committee

meetings is to provide a quick mechanism for allowing health care providers to deal with the effect of such an error and then quickly move on with their job. These meetings often become more of a way for the health care provider, both physicians and nurses, to cope with results of their negligence, rather than an effort to identify the cause and prevent further such errors. Since the victims of medical negligence cannot get access to the discussions and findings o f such meetings, they are left to prove their case with what is recorded in the medical records or remembered by witnesses many months after the incident, filtered through the review by medical experts who have no understanding about the dynamics of any specific hospital. Often, at the request of risks managers, the most significant information about a medical error causing injury or death is recorded not in the medical record, but in a separate report to be reviewed at the committee meeting. Once the meeting is concluded, the incident is washed from the minds of the doctors and nurses, who then return to their patient care duties.

In this voluntary secret system to review medical errors, the attitude of the physicians and nurses towards reducing errors becomes the most important factor in determining whether medical errors are reduced or just that physicians and nurses are able to continue with their job. Most physicians and nurses firmly believe that unless there is clear evidence that a specific medical error actually caused a specific injury or death, the error is of no consequence and therefore there is no compelling reason to find the cause of the error. Much of this attitude is based on the training received in medical and nursing schools, where the practical aspects of teaching on live human subjects often results in errors that are quickly recognized and corrected so that no injury occurs. When an injury or death does occur, the “scientific” approach to understanding the relationship between cause and effect requires excluding all of the underlying medical conditions that the patient brought with them to the hospital before being able to conclude that there is a direct and clear relationship between cause and effect.

Most patients have significant “co-morbidities,” or underlying medical conditions, which are often the reason that brings them to the hospital. In such situations it can be very difficult to see a clear relationship between a medical error and a specific injury or death. The legal concept of causation as a substantial factor in causing injury or death is not the basis for any findings by a hospital mortality and morbidity committee, and is the reason why most medical experts do not easily understand the legal concept of causation in medical negligence cases.

Since nothing in the health care reform legislation is directed at improving the quality of care, the “system” for finding the root cause of medical errors as part of a methodology to reduce such errors will continue as a voluntary and secret system. What will change with health care legislation is that it will add millions more patients to an already saturated system, and thus, more opportunities for medical errors to occur. Patients with insurance are more likely to get medical care than patients who do not have health insurance. Whether or not health care is viewed as a right, medical problems in the form of obesity, diabetes, and an increasing aging population create a need for medical care that will increase in the future. At the same time, there is a finite and, in some cases,

limited number of physicians and nurses to provide such care. Simplifying insurance issues for payment of medical bills, which may occur with health care reform, will not affect the number of physicians and nurses who are available to treat patients. The nursing shortage is not addressed by any of the options for health care reform, and any efforts to reduce the costs of medical care focus on reducing hospital staff rather than increasing the number of nurses.

Increasing the use of computers and other technology will also increase the incidence of medical errors through what hospitals refer to as “inputting errors.” As computer entries, such inputting errors generate a record which, as part of the medical record, becomes available for review by the victim of such an error. Since such inputting errors cannot be prevented, the only method of preventing such an error from affecting a patient is a human confirmation of accuracy between the computer entry and the patient. However, hospitals are cutting back on personnel and increasing the patient care load, making it easier for such imputting errors to go uncorrected and thus adversely affecting a patient.

Even though the number of medical malpractice cases, based on provable medical errors, will increase, an unintended effect of the recent health care debate is that it may be more difficult to prove such liability to a lay jury. A recent survey by the Kaiser Family Foundation found that 92% of Americans are satisfied with their current insurance coverage and 95% are satisfied with their level and quality of medical care. While such statistics are not surprising, since almost any jury pool demonstrates similar opinions during voir dire, the political focus on tort reform as part of the health care debate will have many prospective jurors believing that any significant award for the plaintiff will somehow increase the cost of medical care in the country. This misconception – which was evident in many of the public town hall meetings during the summer – may cause some medical malpractice defendants and their insurers to be more willing to take a clear liability case to a jury trial.

While there may be some uncertainty about how much of an increase in medical errors will occur as a result of more patients entering an over-burdened system, and the impact of any specific case on a specific jury cannot be predicted, what is absolutely certain is that more and more patients will die or be significantly injured as a result of medical negligence. Reducing medical errors was a very much hyped effort by the National Institutes of Health when it first published a report of the Institute of Medicine in 1999, that almost 100,000 American die every year as a result of medical negligence. In the 10 years since that report, the public and government focus on health care has shifted from quality of care to accessibility of care, and there is no indication that this trend will reverse to actually reduce the incidence of medical errors.