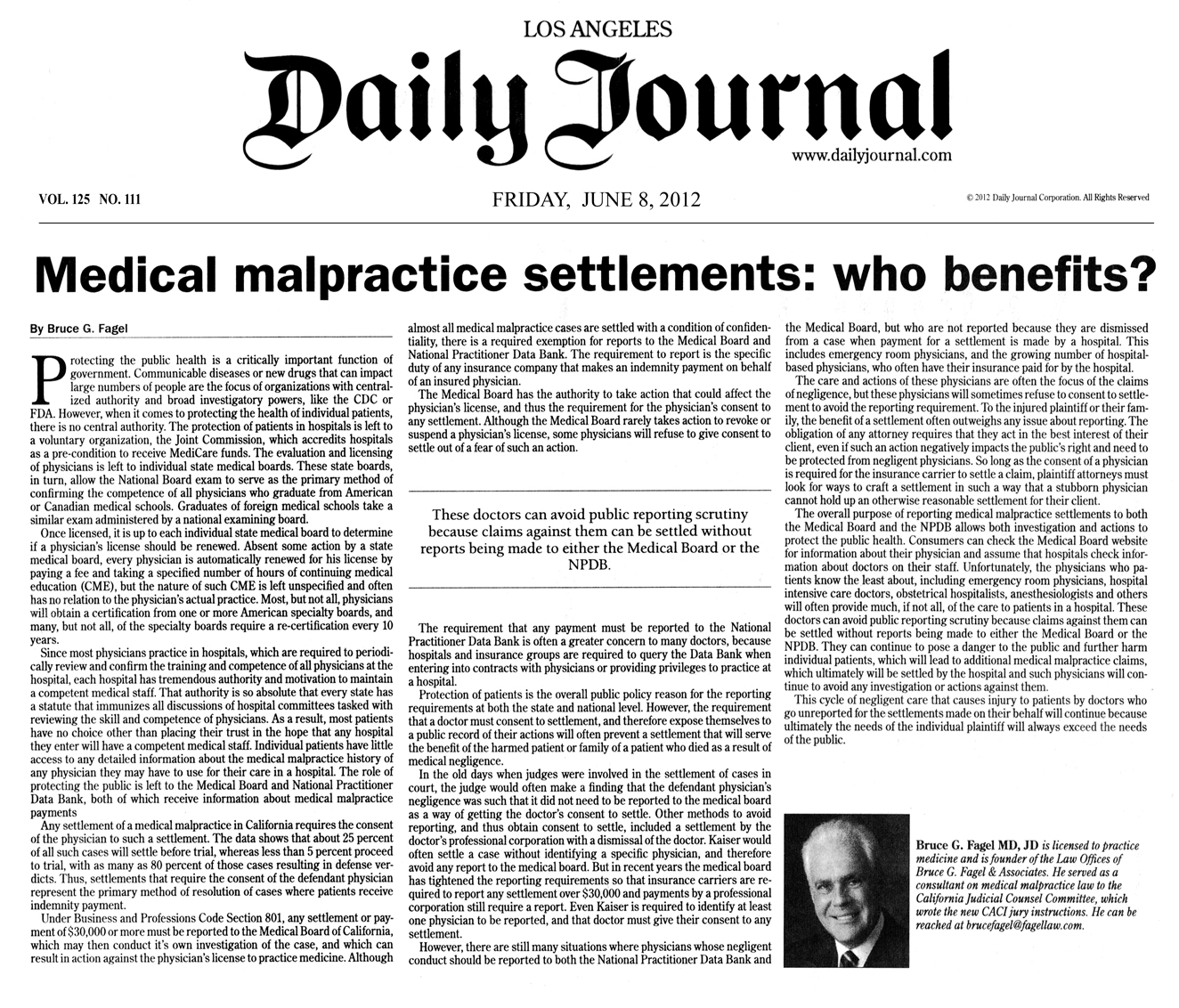 Protecting the public health is a critically important function of government. Communicable diseases or new drugs that can impact large numbers of people are the focus of organizations with centralized authority and broad investigatory powers, like the CDC or FDA. However, when it comes to protecting the health of individual patients, there is no central authority. The protection of patients in hospitals is left to a voluntary organization, the Joint Commission, which accredits hospitals as a precondition to receive MediCare funds. The evaluation and licensing of physicians is left to individual state medical boards. These state boards, in turn, allow the National Board exam to serve as the primary method of confirming the competence of all physicians who graduate from American or Canadian medical schools. Graduates of foreign medical schools take a similar exam administered by a national examining board.

Once licensed, it is up to each individual state medical board to determine if a physician’s license should be renewed. Absent some action by a state medical board, every physician is automatically renewed for his license by paying a fee and taking a specified number of hours of continuing medical education (CME), but the nature of such CME is left unspecified and often has no relation to the physician’s actual practice. Most, but not all, physicians will obtain a certification from one or more American specialty boards, and many, but not all, of the specialty boards require a re-certification every 10 years.

Since most physicians practice in hospitals, which are required to periodically review and confirm the training and competence of all physicians at the hospital, each hospital has tremendous authority and motivation to maintain a competent medical staff. That authority is so absolute that every state has a statute that immunizes all discussions of hospital committees tasked with reviewing the skill and competence of physicians. As a result, most patients have no choice other than placing their trust in the hope that any hospital they enter will have a competent medical staff. Individual patients have little access to any detailed information about the medical malpractice history of any physician they may have to use for their care in a hospital. The role of protecting the public is left to the Medical Board and National Practitioner Data Bank, both of which receive information about medical malpractice payments Any settlement of a medical malpractice in California requires the consent of the physician to such a settlement. The data shows that about 25 percent of all such cases will settle before trial, whereas less than 5 percent proceed to trial, with as many as 80 percent of those cases resulting in defense verdicts. Thus, settlements that require the consent of the defendant physician represent the primary method of resolution of cases where patients receive indemnity payment.

Under Business and Professions Code Section 801, any settlement or payment of $30,000 or more must be reported to the Medical Board of California, which may then conduct it’s own investigation of the case, and which can result in action against the physician’s license to practice medicine. Although almost all medical malpractice cases are settled with a condition of confidentiality, there is a required exemption for reports to the Medical Board and National Practitioner Data Bank. The requirement to report is the specific duty of any insurance company that makes an indemnity payment on behalf of an insured physician.

The requirement that any payment must be reported to the National Practitioner Data Bank is often a greater concern to many doctors, because hospitals and insurance groups are required to query the Data Bank when entering into contracts with physicians or providing privileges to practice at a hospital.

Protection of patients is the overall public policy reason for the reporting requirements at both the state and national level. However, the requirement that a doctor must consent to settlement, and therefore expose themselves to a public record of their actions will often prevent a settlement that will serve the benefit of the harmed patient or family of a patient who died as a result of medical negligence.

In the old days when judges were involved in the settlement of cases in court, the judge would often make a finding that the defendant physician’s negligence was such that it did not need to be reported to the medical board as a way of getting the doctor’s consent to settle. Other methods to avoid reporting, and thus obtain consent to settle, included a settlement by the doctor’s professional corporation with a dismissal of the doctor. Kaiser would often settle a case without identifying a specific physician, and therefore avoid any report to the medical board. But in recent years the medical board has tightened the reporting requirements so that insurance carriers are required to report any settlement over $30,000 and payments by a professional corporation still require a report. Even Kaiser is required to identify at least one physician to be reported, and that doctor must give their consent to any settlement.

However, there are still many situations where physicians whose negligent conduct should be reported to both the National Practitioner Data Bank and the Medical Board, but who are not reported because they are dismissed from a case when payment for a settlement is made by a hospital. This includes emergency room physicians, and the growing number of hospital-based physicians, who often have their insurance paid for by the hospital.

The care and actions of these physicians are often the focus of the claims of negligence, but these physicians will sometimes refuse to consent to settlement to avoid the reporting requirement. To the injured plaintiff or their family, the benefit of a settlement often outweighs any issue about reporting. The obligation of any attorney requires that they act in the best interest of their client, even if such an action negatively impacts the public’s right and need to be protected from negligent physicians. So long as the consent of a physician is required for the insurance carrier to settle a claim, plaintiff attorneys must look for ways to craft a settlement in such a way that a stubborn physician cannot hold up an otherwise reasonable settlement for their client.

the physicians who patients know the least about, including emergency room physicians, hospital intensive care doctors, obstetrical hospitalists, anesthesiologists and others will often provide much, if not all, of the care to patients in a hospital. These doctors can avoid public reporting scrutiny because claims against them can be settled without reports being made to either the Medical Board or the NPDB. They can continue to pose a danger to the public and further harm individual patients, which will lead to additional medical malpractice claims, which ultimately will be settled by the hospital and such physicians will continue to avoid any investigation or actions against them.

This cycle of negligent care that causes injury to patients by doctors who go unreported for the settlements made on their behalf will continue because ultimately the needs of the individual plaintiff will always exceed the needs of the public.