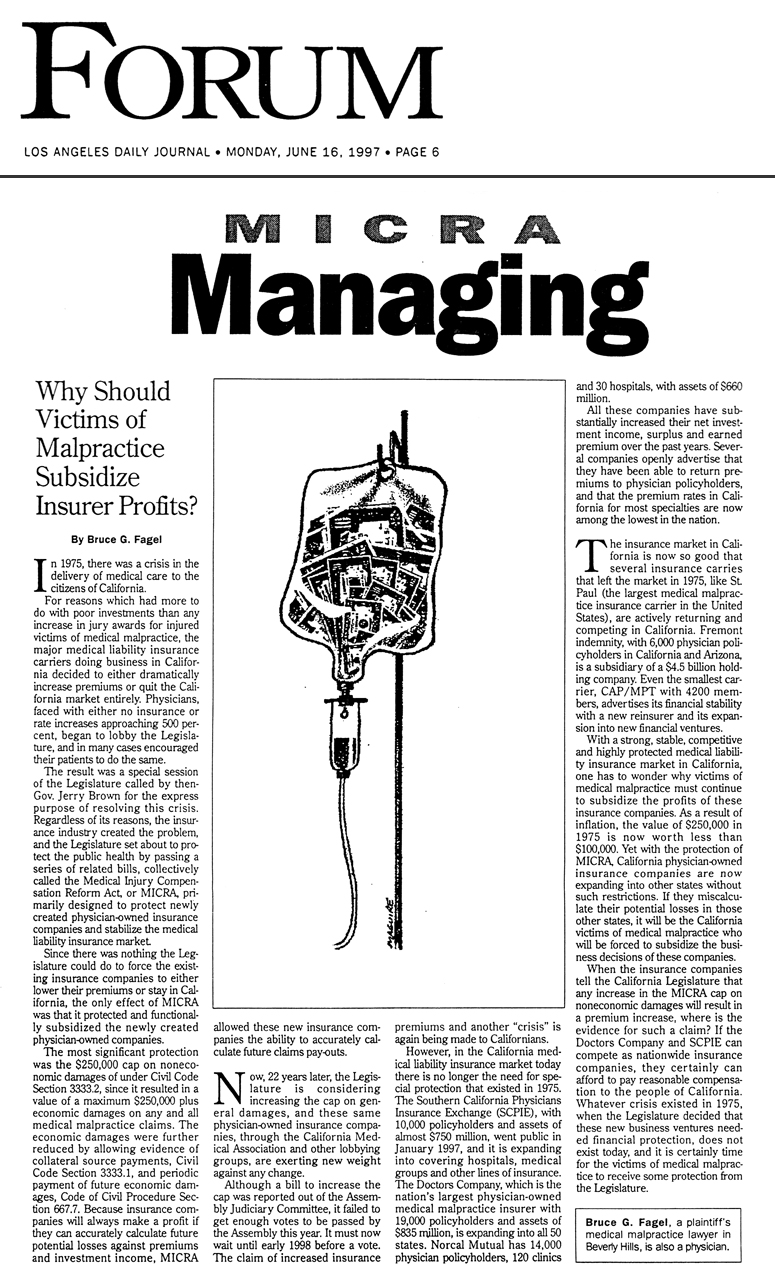 Why Should Victims of Malpractice Subsidize Insurer Profits?

In 1975, there was a crisis in the delivery of medical care to the citizens of California.

For reasons which had more to do with poor investments than any increase in jury awards for injured victims of medical malpractice, the major medical liability insurance carriers doing business in California decided to either dramatically increase premiums or quit the California market entirely. Physicians, faced with either no insurance or rate increases approaching 500 percent, began to lobby the Legislature, and in many cases encouraged their patients to do the same.

The result was a special session of the Legislature called by then-Gov. Jerry Brown for the express purpose of resolving this crisis. Regardless of its reasons, the insurance industry created the problem, and the Legislature set about to protect the public health by passing a series of related bills, collectively called the Medical Injury Compensation Reform Act, or MICRA, primarily designed to protect newly created physician-owned insurance companies and stabilize the medical liability insurance market.

Since there was nothing the Legislature could do to force the existing insurance companies to either lower their premiums or stay in California, the only effect of MICRA was that it protected and functionally subsidized the newly created physician-owned companies.

The most significant protection was the $250,000 cap on noneconomic damages under Civil Code Section 3333.2, since it resulted in a value of a maximum $250,000 plus economic damages on any and all medical malpractice claims. The economic damages were further reduced by allowing evidence of collateral source payments, Civil Code Section 3333.1, and periodic payment of future economic damages, Code of Civil Procedure Section 667.7. Because insurance companies will always make a profit if they can accurately calculate future potential losses against premiums and investment income, MICRA allowed these new insurance companies the ability to accurately calculate future claims pay-outs.

Now, 22 years later, the Legislature is considering increasing the cap on general damages, and these same physician-owned insurance companies, through the California Medical Association and other lobbying groups, are exerting new weight against any change.

Although a bill to increase the cap was reported out of the Assembly Judiciary Committee, it failed to get enough votes to be passed by the Assembly this year. It must now wait until early 1998 before a vote. The claim of increased insurance premiums and another “crisis” is again being made to Californians.

However, in the California medical liability insurance market today there is no longer the need for special protection that existed in 1975. The Southern California Physicians Insurance Exchange (SCPIE), with 10,000 policyholders and assets of almost $750 million, went public in January 1997, and it is expanding into covering hospitals, medical groups and other lines of insurance. The Doctors Company, which is the nation’s largest physician-owned medical malpractice insurer with 19,000 policyholders and assets of $835 million, is expanding into all 50 states. Norcal Mutual has 14,000 physician policyholders, 120 clinics and 30 hospitals with assets of $660 million.

All these companies have substantially increased their net investment income, surplus and earned premium over the past years. Several companies openly advertise that they have been able to return premiums to physician policyholders, and that the premium rates in California for most specialties are now among the lowest in the nation.

The insurance market in California is now so good that several insurance carriers that left the market in 1975, like St. Paul (the largest medical malpractice insurance carrier in the United States), are actively returning and competing in California. Fremont Indemnity, with 6,000 physician policyholders in California and Arizona, is a subsidiary of a $4.5 billion holding company. Even the smallest carrier, CAP/MPT with 4200 members, advertises its financial stability with a new reinsurer and its expansion into new financial ventures.

The insurance market in California is now so good that several insurance carriers that left the market in 1975, like St. Paul (the largest medical malpractice insurance carrier in the United States), are actively returning and competing in California. Fremont Indemnity, with 6,000 physician policyholders in California and Arizona, is a subsidiary of a $4.5 billion holding company. Even the smallest carrier, CAP/MPT with 4200 members, advertises its financial stability with a new reinsurer and its expansion into new financial ventures.

When the insurance companies tell the California Legislature that any increase in the MICRA cap on noneconomic damages will result in a premium increase, where is the evidence for such a claim? If the Doctors Company and SCPIE can compete as nationwide insurance companies, they certainly can afford to pay reasonable compensation to the people of California. Whatever crisis existed in 1975, when the Legislature decided that these new business ventures needed financial protection, does not exist today, and it is certainly time for the victims of medical malpractice to receive some protection from the Legislature.