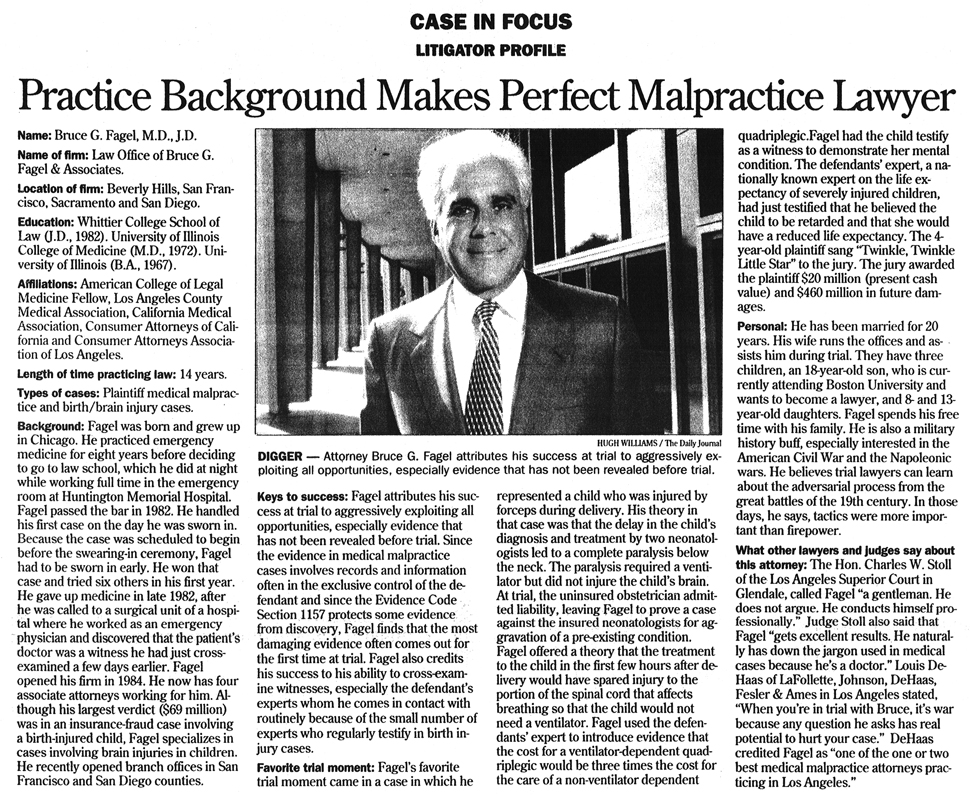 [PHOTO NOT SHOWN] caption: DIGGER — Attorney Bruce G. Fagel attributes his success at trial to aggressively exploiting all opportunities, especially evidence that has not been revealed before trial.

Background: Fagel was born and grew up in Chicago. He practiced emergency medicine for eight years before deciding to go to law school, which he did at night while working full time in the emergency room at Huntington Memorial Hospital. Fagel passed the bar in 1982. He handled his first case on the day he was sworn in. Because the case was scheduled to begin before the swearing-in ceremony, Fagel had to be sworn in early. He won that case and tried six others in his first year. He gave up medicine in late 1982, after he was called to a surgical unit of a hospital where he worked as an emergency physician and discovered that the patient’s doctor was a witness he had just cross-examined a few days earlier. Fagel opened his firm in 1984. He now has four associate attorneys working for him. Although his largest verdict ($69 million) was in an insurance-fraud case involving a birth-injured child, Fagel specializes in cases involving brain injuries in children. He recently opened branch offices in San Francisco and San Diego counties.

Keys to success: Fagel attributes his success at trial to aggressively exploiting all opportunities, especially evidence that has not been revealed before trial. Since the evidence in medical malpractice cases involves records and information often in the exclusive control of the defendant and since the Evidence Code Section 1157 protects some evidence from discovery, Fagel finds that the most damaging evidence often comes out for the first time at trial. Fagel also credits his success to his ability to cross-examine witnesses, especially the defendant’s experts whom he comes in contact with routinely because of the small number of experts who regularly testify in birth injury cases.

Favorite trial moment: Fagel’s favorite trial moment came in a case in which he represented a child who was injured by forceps during delivery. His theory in that case was that the delay in the child’s diagnosis and treatment by two neonatologists led to a complete paralysis below the neck. The paralysis required a ventilator but did not injure the child’s brain. At trial, the uninsured obstetrician admitted liability, leaving Fagel to prove a case against the insured neonatologists for aggravation of a pre-existing condition. Fagel offered a theory that the treatment to the child in the first few hours after delivery would have spared injury to the portion of the spinal cord that affects breathing so that the child would not need a ventilator. Fagel used the defendants’ expert to introduce evidence that the cost for a ventilator-dependent quadriplegic would be three times the cost for the care of a non-ventilator dependent quadriplegic. Fagel had the child testify as a witness to demonstrate her mental condition. The defendants’ expert, a nationally known expert on the life expectancy of severely injured children, had just testified that he believed the child to be retarded and that she would have a reduced life expectancy. The 4- year-old plaintiff sang “Twinkle, Twinkle Little Star” to the jury. The jury awarded $20 million (present cash value) and $460 million in future damages.

Personal: He has been married for 20 years. His wife runs the offices and assists him during trial. They have three children, an 18-year-old son, who is currently attending Boston University and wants to become a lawyer, and 8- and 13- year-old daughters. Fagel spends his free time with his family. He is also a military history buff, especially interested in the American Civil War and the Napoleonic wars. He believes trial lawyers can learn about the adversarial process from the great battles of the 19th century. In those days, he says, tactics were more important than firepower.

What other lawyers and judges say about this attorney: The Hon. Charles W. Stoll of the Los Angeles Superior Court in Glendale called Fagel “a gentleman. He does not argue. He conducts himself professionally.” Judge Stoll also said that Fagel “gets excellent results. He naturally has down the jargon used in medical cases because he’s a doctor.” Louis DeHaas of LaFollette, Johnson, DeHaas, Fesler & Ames in Los Angeles stated, “When you’re in trial with Bruce, it’s war because any question he asks has real potential to hurt your case.” DeHaas credited Fagel as “one of the one or two best medical malpractice attorneys practicing in Los Angeles.”