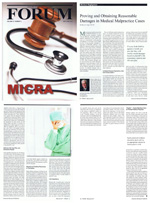 Bruce G. Fagel, MD, JD, has law offices in Beverly Hills. He has been nominated eight times for the CAALA Trial Lawyer of the Year and is honored as a California Super Lawyer. He served as a consultant on medical malpractice law to the California Judicial Council Committee, which wrote the new CACI jury instructions. www.fagellaw.com

Thus, in California medical malpractice cases, you should evaluate the recovery of reasonable economic damages. This involves both proving damages for loss of earnings and/or medical care costs, and proving liability against at least one defendant who has sufficient insurance coverage for such damages. Since most catastrophic injury cases occur in hospitals, this involves finding sufficient evidence of liability of the hospital, even if the physician defendants are “more” at fault in causing the injury. As a result of this situation, hospital defendants in medical malpractice cases will always attempt to limit the economic damages in any catastrophic injury case. You should counter these efforts in order to maximize recovery for both settlements and jury verdicts. Defense attorneys and their experts will use several different approaches to limit any claim for economic damages, but each of these approaches can be countered with both factual and legal responses.

As one part of MICRA, Civil Code §3333.1 was designed to reduce the size of judgments against health care providers by allowing juries to consider evidence of collateral source payments, which are still barred in other personal injury claims. In medical malpractice cases, the defense is allowed to introduce evidence of payments by private health insurance or government benefits, such as Social Security payments. The three main sources of payment for medical care costs are treated differently under the law. Civil Code § 3333.1 (b) prohibits private health insurance companies from seeking reimbursement from the plaintiff for medical care costs paid by such insurance, but self-funded insurance plans that many larger employers have established using health plans as administrators can claim that they are exempted from state law under ERISA. These insurance plans retain the right of reimbursement from the plaintiff patient, and thus the plaintiff should be prepared to oppose any attempt to claim such health insurance as a collateral source under Civil Code § 3333.1. MediCal, which is the source of payment for many medical malpractice plaintiffs is also not a collateral source under the holding of Brown v. Superior Court (1982) 129 Cal.App.3d 331. However, when cases are settled and the plaintiff’s recovery is placed into a Special Needs Trust, MediCal may continue to provide benefits to the plaintiff, unless and until there are further reductions in MediCal availability and payments due to California’s budget problems.

The other major payer of medical benefits is MediCare, which covers individuals over age 65 or those who are disabled for more than 2 years. However, unlike Consumer Attorneys Of California MediCal which allows a Special Needs Trust to pay for care costs after MediCal pays first, MediCare takes the position that MediCare will pay for care after the Special

Needs Trust pays first. Thus, MediCare now requires that the plaintiff establish a MediCare set aside trust (MSA), and if this is not done, then MediCare may refuse to pay for any future care. Unfortunately, the regulations for these details are still being written and there is currently no mechanism to obtain approval of such a MSA by MediCare, and no one knows how such MSA’s will actually function. But since any defendant will require that the plaintiff agree to satisfy any lien, both past and future, that MediCare may assert, the plaintiff must do something towards the establishment of a MSA in order to protect the plaintiff’s recovery against any future MediCare lien. As a result of these new MediCare requirements, there are now companies that will provide reports about the necessary funding for a MSA specific to the plaintiff’s case.

In any significant damage case, the defense will utilize both a life care planner (LCP) and an economist to minimize plaintiff’s damages. Despite the clear law that holds that MediCal is not a collateral source under Civil Code § 3333.1, the defense LCP will frequently show costs after payments by MediCal or Regional Center, and often the defense economist will show the present cash value and total damages only for those same costs not covered by MediCal or Regional Center. While MediCal pays for physician, hospital, and other medical costs throughout the lifetime of the plaintiff, most Regional Centers mainly pay for institutional care for adults. The defense economic report will usually only make calculations for future damages over the defense expert’s opinion on life expectancy, which is often lower than the equivalent life expectancy for the least expensive annuity. What this means is that if the jury makes a finding of life expectancy based on the opinion of the defense expert, it will be impossible to fund the plaintiff’s damages using a life annuity. Therefore, at deposition you should have the defense economist calculate damages using your expert life expectancy opinion, since in most cases if Consumer Attorneys Of California a jury finds liability against a health care provider they will usually award damages based on plaintiff’s life expectancy opinion and life care plan.

Opinions of Treating Physicians or Therapists

Because the “scientific data” on the life expectancy of severely disabled individuals is so grim, the defense will routinely use experts in the field of life expectancy to bolster the opinion of the defense medical experts that the plaintiff will have a very short life expectancy. Regardless of the level of care or the cost of that care, if the evidence can be presented to the jury can show a short life expectancy, the plaintiff’s future care costs can be reduced by 50% or more, in comparison to the opinion of plaintiff’s experts on life expectancy. Many of the articles in the “scientific literature” on the life expectancy of severely disabled individuals comes from a group called The Life Expectancy Project out of San Francisco, which utilizes data that is either decades old or does not examine the difference in outcome of disabled individuals between those who receive proper care in the home versus those who must depend on family and public benefits. The most accurate data on life expectancy is in the area of spinal cord injuries, but for individuals (especially children) with severe brain injuries the data is highly suspect. The Life Expectancy Project has a stable of PhD’s and some MD’s who receive most of their income from testifying in personal injury cases all over the U.S. but often do not make very good witnesses in front of a jury.

Defense experts will want to tell the jury that in their experience and/or from reports in the literature, in most cases of catastrophic injury family members will provide care at home, and most of these individuals have minimal training in health care. The real reality is that in most cases of catastrophic injury in children and even with regard to older adults, the only care available in the home is provided by the family. The State of California (and other states) have recognized this fact, and that it is cheaper to keep such individuals in their home rather than in more expensive small group homes or institution. In-home Support Services (IHSS) pays family members a minimum wage for a variable number of hours per month for family members to keep such disabled individuals in their home. At trial the court will usually sustain an objection by plaintiff to the attempt by defense experts to talk about what “most people” do with regard to the home care of a disabled individual, since it is non relevant to what this plaintiff reasonably requires for future care. Such statistical evidence should be dealt with by an appropriate motion in limine prior to trial.

While some medical malpractice defense attorneys prefer not to put on evidence or argue damages before the jury, so they can concentrate on liability issues that will usually give them a defense verdict, attorneys who represent the hospital in such cases cannot afford that risk. Thus, you can expect both multiple experts and arguments on damages in an attempt to make such cases more difficult for plaintiffs at trial. By attacking the basis for each of these expert opinions and using the existing law on damages (which is far more favorable to plaintiffs than the law on liability in medical malpractice cases) plaintiff can prevent a liable defendant from reducing plaintiff’s legitimate and reasonable damages.

Bruce G. Fagel, MD, JD, has law offices in Beverly Hills. He has been nominated eight times for the CAALA Trial Lawyer of the Year and is honored as a Californias Super Laywer. He served as a consultant on medical malpractice law to the California Judicial Counsel Committee, which wrote the new CACI jury instructions. www.fagellaw.com