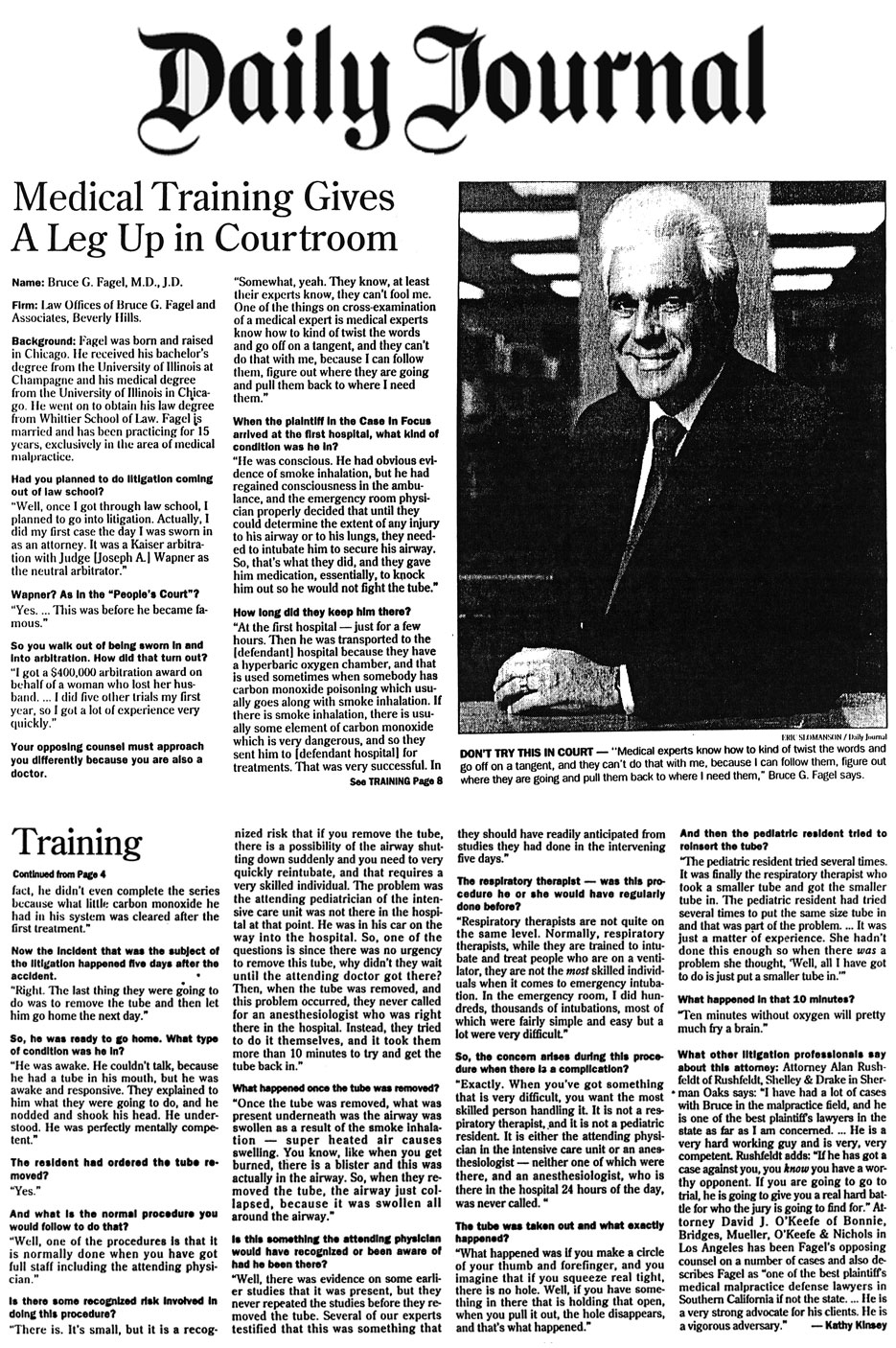 LITIGATOR STRATEGY
Medical Training Gives
A Leg Up in Courtroom

Background: Fagel was born and raised in Chicago. He received his bachelor’s degree from the

Chicago. He went on to obtain his law degree from Whittier School of Law. Fagel is married

and has been practicing for 15 years, exclusively in the area of medical malpractice.

Had you planned to do litigation coming out of law school?

“Well, once I got through law school, I planned to go into litigation. Actually, I did my first case

the day I was sworn in as an attorney. It was a Kaiser arbitration with Judge [Joseph A.] Wapner

as the neutral arbitrator.”

Wapner? As in the “People’s Court”?

“Yes. … This was before he became famous.”

So you walk out of being sworn in and into arbitration. How did that turn out?

other trials my first year, so I got a lot of experience very quickly.”

Your opposing counsel must approach you differently because you are also a doctor.

“Somewhat, yeah. They know, at least their experts know, they can’t fool me. One of the things

and go off on a tangent, and they can’t do that with me, because I can follow them, figure out

where they are going and pull them back to where I need them.”

When the plaintiff in the Case in Focus arrived at the first hospital, what kind of condition

“He was conscious. He had obvious evidence of smoke inhalation, but he had regained

consciousness in the ambulance, and the emergency room physician properly decided that until

they could determine the extent of any injury to his airway or to his lungs, they needed to

intubate him to secure his airway. So, that’s what they did, and they gave him medication,

essentially, to knock him out so he would not fight the tube.”

How long did they keep him there?

“At the first hospital — just for a few hours. Then he was transported to the [defendant] hospital

because they have a hyperbaric oxygen chamber, and that is used sometimes when somebody has

carbon monoxide poisoning which usually goes along with smoke inhalation. If there is smoke

inhalation, there is usually some element of carbon monoxide which is very dangerous, and so

they sent him to [defendant hospital] for treatments. That was very successful. In fact, he didn’t

after the first treatment.”

[PHOTO NOT SHOWN] caption: DON’T TRY THIS IN COURT — “Medical experts know how to kind of twist the words and go off on a tangent, and they can’t do that with me, because I can follow them, figure out where they are going and pull them back to where I need them,” Bruce G. Fagel says.

Now the incident that was the subject of the litigation happened five days after the accident.

“Right. The last thing they were going to do was to remove the tube and then let him go home the next day.”

So, he was ready to go home. What type of condition was he in?

“He was awake. He couldn’t talk, because he had a tube in his mouth, but he was awake and responsive. They explained to him what they were going to do, and he nodded and shook his head. He understood. He was perfectly mentally competent.”

The resident had ordered the tube removed.

And what is the normal procedure you would follow to do that?

“Well, one of the procedures is that it is normally done when you have got full staff including the attending physician.”

Is there some recognized risk involved in doing this procedure?

“There is. It’s small, but it is a recognized risk that if you remove the tube, there is a possibility of the airway shutting down suddenly and you need to very quickly reintubate, and that requires a very skilled individual. The problem was the attending pediatrician of the intensive care unit was not there in the hospital at that point. He was in his car on the way to the hospital. So, one of the questions is since there was no urgency to remove this tube, why didn’t they wait until the attending doctor got there? Then, when the tube was removed, and this problem occurred, they never called for an anesthesiologist who was right there in the hospital. Instead, they tried to do it themselves, and it took them more than 10 minutes to try and get the tube back in.”

What happened once the tube was removed?

“Once the tube was removed, what was present underneath was the airway was swollen as a result of the smoke inhalation — super heated air causes swelling. You know, like when you get burned, there is a blister and this was actually in the airway. So, when they removed the tube, the airway just collapsed, because it was swollen all around the airway.”

Is this something the attending physician would have recognized or been aware of had he been there?

“Well, there was evidence on some earlier studies that it was present, but they never repeated the studies before they removed the tube. Several of our experts testified that this was something that they should have readily anticipated from studies they had done in the intervening five days.”

The respiratory therapist — was this a procedure he or she would have regularly done before?

“Respiratory therapists are not quite on the same level. Normally, respiratory therapists, while they are trained to intubate and treat people who are on a ventilator, they are not the most skilled individuals when it comes to emergency intubation. In the emergency room, I did hundreds, thousands of intubations, most of which were fairly simple and easy but a lot were very difficult.”

So, the concern arises during this procedure when there is a complication?

“Exactly. When you’ve got something that is very difficult, you want the most skilled person handling it. It is not a respiratory therapist, and it is not a pediatric resident. It is either the attending physician in the intensive care unit or an anesthesiologist — neither one of which were there, and an anesthesiologist, who is there in the hospital 24 hours of the day, was never called.”

The tube was taken out and what exactly happened?

“What happened was if you make a circle of your thumb and forefinger, and you imagine that if you squeeze real tight, there is no hole. Well, if you have something in there that is holding that open, when you pull it out, the hole disappears, and that’s what happened.”

And then the pediatric resident tried to reinsert the tube?

What happened in that 10 minutes?

“Ten minutes without oxygen will pretty much fry a brain.”

What other litigation professionals say about this attorney: Attorney Alan Rushfeldt of Rushfeldt, Shelley & Drake in Sherman Oaks says: “I have had a lot of cases with Bruce in the malpractice field, and he is one of the best plaintiff’s lawyers in the state as far as I am concerned. … He is a very hard working guy and is very, very competent. Rushfeldt adds: “If he has got a case against you, you know you have a worthy opponent. If you are going to go to trial, he is going to give you a real hard battle for who the jury is going to find for.” Attorney David J. O’Keefe of Bonnie, Bridges, Mueller, O’Keefe & Nichols in Los Angeles has been Fagel’s opposing counsel on a number of cases and also describes Fagel as “one of the best plaintiff’s medical malpractice defense lawyers in Southern California if not the state. … He is a very strong advocate for his clients. He is a vigorous adversary.” — Kathy Kinsey