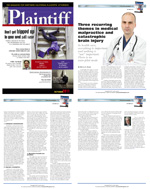 Three recurring themes in medical malpractice and catastrophic brain injury In health care, everything is important and nothing is “not” important. There is no auto-pilot mode

Catastrophic brain injury as a result of a severe hypoxic or ischemic event is the type of medical malpractice case that represents the greatest cost to hospitals, society and the family of the injured victim. There are three main reasons why these injuries occur and they are recurring themes in brain injury and, indeed, in most catastrophic medical-malpractice cases.

These themes are system communication errors, improper assumptions about the actions of others, and the mentality of the involved health-care providers. These problems are not only the root cause of many of these injury cases, but at the same time their very nature prevents health-care providers from being able to change or improve in a way to eliminate them. As a result, these types of medical-malpractice cases will continue to occur and both plaintiffs’ attorneys and hospital insurers need to understand this fact.

A hypoxic brain injury occurs when the brain is deprived of sufficient oxygen for a prolonged period of time, which can be as short as five minutes in an adult and somewhat longer in a newborn baby. An ischemic brain injury occurs when there is inadequate blood flow to the brain, or to a specific part of the brain, which can occur as a result of a blood clot in an adult or insufficient blood flow in a newborn baby, usually as a result of some compromise of the umbilical cord or placenta. While not all of these events represent preventable injuries, many are in fact preventable, but they continue to occur because of one or more problems with communication, assumptions, or mind-set. Preventable hypoxic brain injuries to adults usually occur because the patient’s underlying condition (the reason they are in the hospital) deteriorates to the point of causing cardiac and/or respiratory arrest. Preventable hypoxic brain injuries to newborn infants usually occur because the baby’s condition in the uterus deteriorates to cause injury before delivery, and the obstetrician and/or nurses fail to recognize the problem in time. In many of theses cases there are common root causes.

Inadequate communication is the single most common root cause of most preventable catastrophic injuries that occur in hospitals. This includes a failure of nurses to communicate with each other, usually at change of shift, or inadequate communication with physicians, which can occur at any time. An analysis of the type of communication problems that occur in individual cases usually shows a system problem in which multiple communication problems compound each other rather than any individual who is easily identified. When hospitals conduct peer review meetings to review and discuss the cause of poor outcomes, the fact that no one individual nurse or physician can be identified as the single source of the problem is one reason such cases will continue to occur. In most work places communication problems are identified and solutions are instituted, which may include the firing of specific employees, but this rarely happens in hospitals for a number of reasons, including the fact that it would be difficult to fire all of the nurses or other hospital employees who are part of the communications failures that lead to catastrophic outcomes for specific patients.

Another root cause of many situations that end in a catastrophic outcome for a patient are improper assumptions about what other health-care providers have done or will do with a patient. Since health care in a hospital is supposed to be a team effort with multiple health-care providers interacting with a patient and each other, it is important for nurses and doctors to know what to expect and rely upon from each other. Unlike most other work environments which involve the same people working together, there is far more turnover in a hospital with many more health-care providers who do not interact with each other often enough to become familiar with each others’ work habits and talents. As a result, doctors and nurses will often make incorrect assumptions about each other in relation to information about a patient or even who is responsible for various aspects of patient care.

Physicians often incorrectly rely on nurses to provide them with the information about a patient that is necessary for the physician to provide proper care, and the physician will assume that the nurses will do so without any specific basis for such an assumption. When multiple physicians are involved in the care of a patient, which occurs frequently with those patients most at risk for their condition to deteriorate, there is often unclear delineation of responsibility between different physicians. Not infrequently, one physician will assume that another physician is in charge, when the reality is anything but clear.

The single most important cause of many medical malpractice cases that involve catastrophic brain injuries is the mentality or mind-set of the involved health care providers, both doctors and nurses, including other ancillary health-care personnel. This problem is rarely identified as a root cause of poor outcomes in hospitals, and this failure is one of the reasons why, even if all other causes of medical negligence are identified and corrected, medical negligence causing serious injury and death will never be eliminated.

The modern medical technology that is used in hospitals is so complex that it is difficult for health-care providers to understand the limitations of such technology. This includes electronic fetal monitoring and ultrasound machines that are routinely used in the delivery of more than 85 percent of the over 4 million babies each year and electronic monitoring that is used in all hospital intensive care units throughout the country. Unfortunately, with all of these gadgets, nurses and doctors tend to over-rely on their use, and even when they show that there is some problem with the patient, many nurses and physicians will assume that the cause of the problem is the equipment rather than the patient’s condition. They will often insist on re-checking the equipment or in bringing in additional equipment and the delay can, in some cases, be significant to the outcome of the patient.

The mentality or mind-set of health-care providers is most evident when the situation requires a skill or knowledge beyond that of the involved healthcare provider. Health-care providers, especially physicians, spend many years learning about an increasingly narrow subject,

i.e. specialization, yet the most important thing for them to know is what they don’t know. While that concept can be understood intellectually, in practice, it can be very difficult for a doctor or nurse to admit to themselves that they need help, or that they are “in over their head.” In some critical situations, where a delay of even a few minutes can have disastrous consequences, nurses can be reluctant to call for assistance from other nurses or to notify a doctor who is often nearby at the nurses’ station.

In other situations where the condition and needs of the patient require a skill level beyond that of the doctor who is with the patient, there is often a failure to acknowledge that such additional assistance is required. Since these situations often involve some type of critical emergency or sudden deterioration of the patient’s condition, it can often be difficult for a jury to find liability against doctors or nurses involved in such an emergency. But when the catastrophic outcome can be shown to be preventable by earlier intervention that was indicated by the patient’s condition, a jury will not always accept the excuse that the doctors and nurses had tried their best.

Unlike other forms of human interaction, in health care there is no direct correlation between the activity and the outcome. On some occasions, seemingly innocent or minimal actions can have disastrous consequences. In health care, everything is important and nothing is “not” important. There is no auto-pilot mode, and thus doctors and nurses must be constantly vigilant.

A patient who has been stable for hours can become suddenly unstable. In other activities, engaging in dangerous or reckless activity, e,g, speeding while driving or not maintaining equipment, can be expected to increase the risk of causing injury or death. But health care involves the absolute opposite of dangerous or reckless behavior, since almost all doctors and nurses are genuinely motivated by an attempt to help the patient. Most health-care providers do not understand why their actions, when well intentioned, should have such huge financial consequences. They do not understand, and never will, that the measure of their fault is in the consequence of causing serious injury or death.

Because all doctors and nurses understand that serious injury and/or death can occur in any hospital as a result of the natural progression of disease, the fact of a bad outcome or death does not generate any great concern or interest in correction of actions. While every hospital requires a review of any bad outcome or death, even when actions of doctors or nurses are questioned, or made the subject of some investigation, the discussion focuses on the nature of the action or inaction, not on the seriousness of the effect.

Most doctors and nurses have great difficulty understanding why legal liability flows from the nature of the injury or death, rather than from the recklessness of their actions. As a result of this medical-legal disconnect, and the fact that doctors and nurses cannot maintain a constant state of high alert, preventable catastrophic injuries will continue to occur in hospitals9 and even though such injuries may be completely out of proportion to the actions of the doctors or nurses, the financial impact to the doctors and hospitals will be based on the outcome of those actions.

Bruce G. Fagel, M.D., graduated from the Univ. of Ill. (1972), and was li­censed to practice medicine: Illinois, 1973; California 1975. He received his JD at Whittier College (1982). Dr. Fagel is a regularly in­vited speaker before organi­zations of attorneys, physicians, and hospitals internationally, and has been interviewed by CBS, ABC, NBC and various media affiliates. Featured in “The Best Lawyers in America, 2007,” he has been an eight-time nominee by Consumer Attorneys Association for Trial Lawyer of the Year and recently featured in the National Law Journal as “The 10 Best Trial Attorneys in the Nation”. Dr. Fagel has au­thored various articles on medical malpractice issues and served as a consultant on medical malpractice law to the California Judicial Counsel Committee, which wrote the new CACI jury instructions (California Approved Civil Instructions).