Trial of Dr. Conrad Murray: What Does it Really Mean? 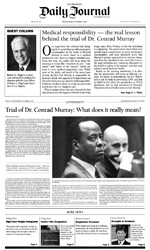 Trial of Dr. Conrad Murray: What does it really mean?

On a legal level, the criminal trial charging Dr. Conrad Murray with involuntary manslaughter in the death of Michael Jackson is much closer to a medical malpractice case than to a typical criminal case. From this trial, the public will learn about the meaning of terms like “standard of care,” “causation,” and “battle of the experts,” which are basic to every medical malpractice case. While most of the public and much of the press have already decided that Murray is responsible for Jackson’s death, this appears to be based more on the belief that someone must be held responsible. A defense verdict is likely to create an outcry not heard since the O.J. Simpson case.

What is unique about this case, beyond the fact that Jackson was the biggest celebrity to die from drugs since Elvis Presley, is that the defendant is a physician. The prosecution must follow very specific legal requirements to prove involuntary manslaughter, and must ultimately prove that Murray’s actions represented an extreme departure from the standard of care, such that it meets the legal definition of a “conscious disregard for the health or safety of the patient,” and that such actions caused Jackson’s death.

Based on the opening statements, it is clear that the prosecution will focus on Murray’s actions: his failure to immediately call 911; that he had to ask for help in performing CPR; and that he failed to tell either the paramedics or UCLA physicians that he had administered Propofol. The prosecution will also focus on how Murray gave Jackson almost daily doses of Propofol and ordered massive amounts of Propofol under very suspicious circumstances. In response, the defense will attempt to prove that Jackson was responsible for his own death, or that the Propofol given by Murray did not cause his death.

The “science” of this case will come down to the final fatal dose of Propofol that was listed by the coroner as the cause of death. It is likely that medical experts will offer competing theories on this issue. Like most medical malpractice cases where the actions of physicians or nurses are considered to be below the standard of care, the usual defense is causation, since that is where medical experts can offer opinions that can never be disproven in court.

In this case, it is likely that all of the medical experts who testify will admit, either on direct examination or cross-examination, that the administration of Propofol to anyone outside of a controlled monitored setting, either in a hospital or surgical center, is well below any acceptable standard of care. They will also agree that the administration of Propofol without continuous supervision of blood pressure and heart monitoring, including the use of oxygen saturation monitors with alarms, represents a conscious disregard for the health and safety of a patient. The fact that these drugs were given in a home setting does not in itself prove a conscious disregard for the health or safety of a patient. Rather, it is the fact that no resuscitation equipment, including a defibrillator, a bag-mask for ventilation, and equipment to intubate a patient and control his airway, was kept in the house. This left Jackson completely vulnerable to any untoward event.

If a patient with an otherwise healthy heart stops breathing for any reason, the prompt

and effective use of resuscitation equipment will usually be successful in reviving the patient. That is why the paramedics who arrived on the scene initially thought they had a chance to save Jackson, because they were told that the arrest had just occurred a few minutes before their arrival. When it became apparent that the “time down” was much longer, no effort to revive would have saved Jackson. The paramedics responded with both the equipment and ability, but were too late to make any difference.

When [Michael] Jackson died on his watch – that was the inevitable consequence of [Dr. Conrad] Murray’s violation of his oath to ‘first do no harm’ to his patient. This jury will decide the facts based on what they understand, which will be Murray’s actions rather than the competing, and probably confusing, evidence on causation. The evidence of a cover-up by Murray should be enough to show a “consciousness of guilt” and enable a jury to return a verdict of guilty.

Unfortunately, much of the evidence and focus misses the real significance of this case. The sad fact is that Jackson was addicted to drugs, like many other celebrities. Despite the denials by his family and friends, who were apparently unable to intervene on Jackson’s behalf, it is clear from the evidence and the final toxicology report that he abused drugs. This led to a high tolerance for sedative and hypnotic drugs, and also to severe side effects that led to even more drug use.

When Murray signed on to be Jackson’s personal physician, he assumed a moral and ethical responsibility to him. Instead of refusing to participate in an ever-increasing drug dependency or engaging other medical professionals who could provide treatment for his addiction, Murray, in effect, became Jackson’s personal drug dealer. At that point, Murray violated his basic oath and obligation as a physician.

Ultimately, Murray should be convicted of involuntary manslaughter, not necessarily because of what he did or did not do on June 25, 2009, but because he violated his primary medical oath to protect his patient. From the moment he signed on and agreed to continue to provide drugs to Jackson, he assumed full and ultimate responsibility for his health and life. When Jackson died on his watch – that was the inevitable consequence of Murray’s violation of his oath to “first do no harm” to his patient.

The public may debate the outcome of this case after the jury verdict, but physicians in this country should recognize and understand that as doctors, they have a special obligation and responsibility to their patients. There are few cases where a physician’s actions rise to the level of a conscious disregard for the health and safety of the patient, but there are many cases where physicians, for financial or other reasons, violate their oath of medical responsibility.