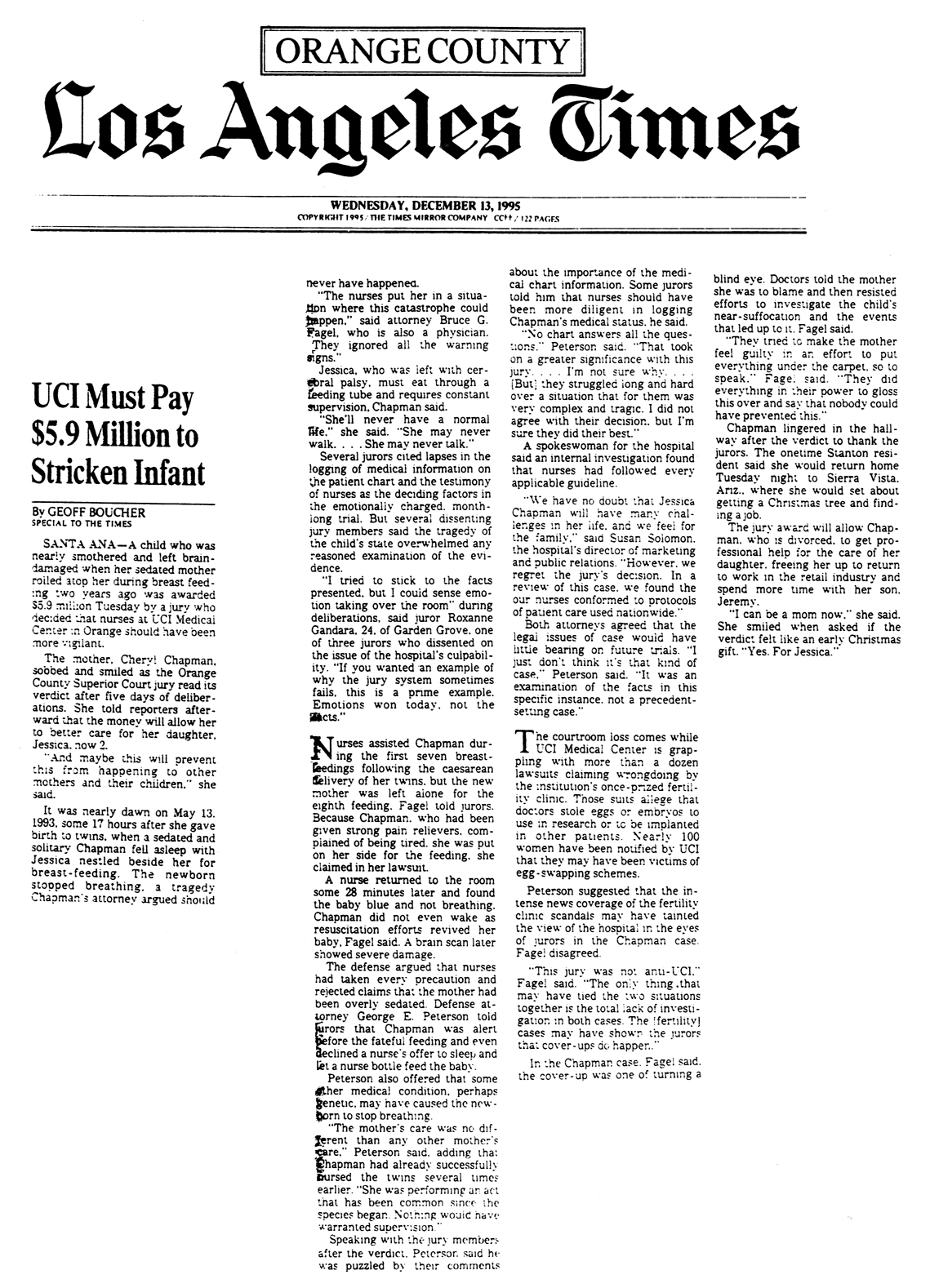 By Geoff Boucher SPECIAL TO THE TIMES

SANTA ANA— A child who was nearly smothered and left brain-damaged when her sedated mother rolled atop her during breast-feeding two years ago was awarded $5.9 million Tuesday by a jury who decided that nurses at UCI Medical Center in Orange should have been more vigilant.

The mother, Cheryl Chapman, sobbed and smiled as the Orange County Superior Court jury read its verdict after five days of deliberation. She told reporters afterward that the money will allow her to better care for her daughter, Jessica, now 2.

“And maybe this will prevent this from happening to other mothers and their children,” she said.

It was nearly dawn on May 13, 1993, some 17 hours after she gave birth to twins, when a sedated and solitary Chapman fell asleep with Jessica nestled beside her for breast-feeding. The newborn stopped breathing, a tragedy Chapman’s attorney argued should never have happened.

“The nurses put her in a situation where this catastrophe could happen,” said attorney Bruce G. Fagel, who is also a physician. They ignored all the warning signs.”

Jessica, who was left with cerebral palsy, must eat through a feeding tube and requires constant supervision, Chapman said.

Several jurors cited lapses in the logging of medical information on the patient chart and the testimony of nurses as the deciding factors in the emotionally charged, month-long trial. But several dissenting jury members said the tragedy of the child’s state overwhelmed any reasoned examination of the evidence.

“I tried to stick to the facts presented, but I could sense emotion taking over the room” during deliberations, said juror Roxanne Gandara, 24, of Garden Grove, one of three jurors who dissented on the issue of the hospital’s culpability. “If you wanted an example of why the jury system sometimes fa

Nurses assisted Chapman during the first seven breast-feedings following the caesarean delivery of her twins, but the new mother was left alone for the eighth feeding, Fagel told jurors. Because Chapman, who had been given strong pain relievers, complained of being tired, she was put on her side for the feeding, she claimed in her lawsuit.

A nurse returned to the room some 28 minutes later and found the baby blue and not breathing. Chapman did not even wake as resuscitation efforts revived her baby, Fagel said. A brain scan later showed severe damage.

The defense argued that nurses had taken every precaution and rejected claims that the mother had been overly sedated. Defense attorney George E. Peterson told jurors that Chapman was alert before the fateful feeding and even declined a nurse’s offer to sleep and let a nurse bottle feed the baby.

Peterson also offered that some other medical condition, perhaps genetic, may have caused the newborn to stop breathing.

“The mother’s care was no different than any other mother’s care,” Peterson said, adding that Chapman had already successfully nursed the twins several times earlier. “She was performing an act that has been common since the species began. Nothing would have warranted supervision.”

Speaking with the jury members after the verdict, Peterson said he was puzzled by their comments about the importance of the medical chart information. Some jurors told him that nurses should have been more diligent in logging Chapman’s medical status, he said.

“No chart answers all the questions,” Peterson said. “That took on a greater significance with this jury. . . . I’m not sure why. . . . [But] they struggled long and hard over a situation that for them was very complex and tragic. I did not agree with their decision, but I’m sure they did their best.”

A spokeswoman for the hospital said an internal investigation found that nurses had followed every applicable guideline.

“We have no doubt that Jessica Chapman will have many challenges in her life, and we feel for the family,” said Susan Solomon, the hospital’s director of marketing and public relations. “However, we regret the jury’s decision. In a review of this case, we found that our nurses conformed to protocols of patient care used nationwide.”

Both attorneys agreed that the legal issues of the case would have little bearing on future trials. “I just don’t think it’s that kind of case,” Peterson said. “It was an examination of the facts in this specific instance, not a precedent-setting case.”

The courtroom loss comes while UCI Medical Center is grappling with more than a dozen lawsuits claiming wrongdoing by the institution’s once-prized fertility clinic. Those suits allege that doctors stole eggs or embryos to use in research or to be implanted in other patients. Nearly 100 women have been notified by UCI that they may have been victims of egg-swapping schemes.

Peterson suggested that the intense news coverage of the fertility clinic scandals may have tainted the view of the hospital in the eyes of jurors in the Chapman case. Fagel disagreed.

“This jury was not anti-UCI,” Fagel said. “The only thing that may nave tied the two situations together is the total lack of investigation in both cases. The [fertility] cases may have shown the jurors that cover-ups do happen.”

In the Chapman case, Fagel said, the cover-up was one of turning a blind eye. Doctors told the mother she was to blame and then resisted efforts to investigate the child’s near- suffocation and the events that led up to it, Fagel said.

“They tried to make the mother feel guilty in an effort to put everything under the carpet, so to speak,” Fagel said. “They did everything in their power to gloss this over and say that nobody could have prevented this.”

Chapman lingered in the hallway after the verdict to thank the jurors. The onetime Stanton resident said she would return home Tuesday night to Sierra Vista, Ariz., where she would set about getting a Christmas tree and finding a job.

The jury award will allow Chapman, who is divorced, to get professional help for the care of her daughter, freeing her up to return to work in the retail industry and spend more time with her son, Jeremy.

“I can be a mom now,” she said. She smiled when asked if the verdict felt like an early

Christmas gift. “Yes. For Jessica.”ils, this is a prime example. Emotions won today, not the facts.”