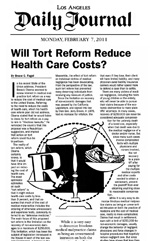 In his recent State of the Union address, President Barack Obama seemed to renew interest in medical malpractice tort reform as a way to reduce the cost of medical care in the United States.

Referring to the need to reduce the costs of health care, which his health care reform plan did not address, Obama stated that he would listen to ideas for tort reform as a way to rein in “frivolous lawsuits.” He reminded the country that this proposal was a Republican suggestion, and implied that action on tort reform could thus be bi-partisan.

The reality of tort reform, which Obama certainly knows, is that it would have little impact on reducing the cost of health care. The most optimistic estimates on such “tort reform” is that it might reduce health care costs by less than 3 percent, and that assumes that much of the cost of medical malpractice includes the ordering of otherwise unnecessary and expensive tests, commonly referred to as “defensive medicine.” The main focus of this proposed tort reform is the limitation on the recovery of non-economic damages to a maximum of $250,000. This limitation, which has been the subject of legislation introduced in the House in each of the last several Congresses, is based on the model of MICRA (Medical Injury Compensation Reform Act), which was passed in California in 1975.

California Civil Code Section 3333.2 is the part of MICRA that imposes a $250,000 limitation on the recovery of non-economic damages in any action against a health care provider in California. This limitation affects medical malpractice cases against physicians, nurses, hospitals, and any licensed health care provider. While such a limitation has been in effect in California since 1975, it has done little to reduce the increasing costs of health care in California. The reality of health care costs is that many physicians will order unnecessary and expensive tests on their patients, not because they are worried about being sued if they do not order such tests, but because such tests are routinely covered by both private health insurance, and more importantly, by both MediCare and MediCal. Physicians know that they are often paid more for their interpretation of tests than for their time spent examining or talking to patients. Also, many of the most expensive tests are either performed by physicians or performed at facilities owned by physicians.

If tort reform limitations on recovery of non-economic damages do not have any direct effect on lowering the cost of liability insurance or the cost of health care, there is evidence that there has been a reduction in the number of medical malpractice claims. However, while society may feel that it is beneficial to reduce the number of medical malpractice claims, society would be better served if the incidence of actual medical negligence were reduced. Meanwhile, the effect of tort reform on individual victims of medical negligence has been devastating. From the perspective of the law, such tort reform has prevented many deserving individuals from receiving any measure of justice.

Since the limitation on recovery of non-economic damages that was passed by the California Legislature, and signed into law by then Gov. Jerry Brown, in 1975, had no increase for inflation, the real effect of MICRA has been the reduced value of noneconomic damages for each year that passes. In 1975 dollars, the current value of the limitation is less than $75,000. The cost of retaining medical experts, deposition reporters,

copy costs, and even filing fees was commensurate with 1975 costs. In the last 30 years, the costs of medical experts, deposition reports, copy costs, and other litigation costs have increased significantly. As a result, many cases now cost more than can be recovered, and economics alone has resulted in such cases simply not being filed. When they are filed, many defense attorneys can and will run up the costs for such cases because they know that even if they lose, their client will have limited liability, and many physician-owed liability insurance carriers would rather spend more to defend a case than to settle.

There are many victims of medical negligence, including the heirs of young children or the elderly, who will never be able to pursue their claims because of the economic disincentive to many plaintiffs’ attorneys. In many cases, recovery of $250,000 can never be considered adequate compensation for the untimely death of a loved one, especially when that death was due to the medical negligence of a doctor and/or nurse. But since many such cases involve complicated facts with multiple physicians and nurses involved, the net recovery to a plaintiff after paying for the multiple medical experts and other costs needed to obtain a settlement, prevent the plaintiff from ever obtaining anything close to reasonable compensation.

While it is very easy to demonize frivolous medical malpractice claims as being an unwarranted intrusion on both the practice of medicine and the cost of medical care, reality is more complicated. Claims that result in settlement, even with a limit of $250,000 for non-economic damages, usually change the behavior of negligent physicians and force changes in hospital procedures that hopefully reduce negligent care. But since studies have shown that less than 10 percent of patients who suffer harm from negligent care ever file a medical malpractice claim, any improvement in medical practice or hospital procedures will not translate into a drop in the overall incidence of negligent care that result in lawsuits. Meanwhile, the incidence of cases that result in defense jury verdicts or are withdrawn prior to trial will continue to provide evidence of frivolous lawsuits.

To suppose that further restricting the rights of Americans to obtain any sense of justice and reasonable compensation, based on the myth that tort reform will reduce health care costs, is a cynical attack on the basic rights that we should have in this country. The fact that there is no evidence that limiting recovery in medical malpractice claims will ever reduce actual health care costs is even more disturbing to our sense of justice in this country.