Withdrawal of Life Support and Medical Malpractice: The Unethical Dilemma 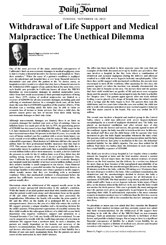 Withdrawal of Life Support and Medical Malpractice: The Unethical Dilemma

One of the most perverse of the many unintended consequences of California’s limit on non-economic damages in medical negligence cases is that it creates a financial incentive for doctors and hospitals to “bury their mistakes.” When the cause of a patient’s condition is negligent care, the physicians and hospital have a very large financial interest to discontinue care and allow the patient to die. No doctor, nurse, or hospital executive would ever admit that they have a financial interest in the withdrawal of life support of any patient; but at the same time, every such health care provider in California knows all about the MICRA limitation on non-economic damages in medical malpractice cases, either from their trade associations or their personal experience of being sued. Since 1975, victims of medical malpractice are limited to a recovery of $250,000 for all non-economic damages, including pain and suffering or emotional distress. In a wrongful death case, all the heirs share the same limit of $250,000 regardless of the number of heirs. If the decedent was a working adult, the heirs may be able to claim an economic loss of income or home services. But when a child dies, the parents cannot prove any loss of income from their child, leaving non-economic damages as their only claim.

Although non-economic damages are limited, there is no limit on economic damages for medical care costs or loss of earnings. Since no inflation factor was made part of the law in 1975, the purchasing power of $250,000 has decreased to less than $80,000 today.

While wages in the U.S. have increased in line with inflation since 1975, medical care costs have increased more than 700 percent in the last 35 years. As a result, the costs of future medical care for a patient with a severe brain injury can easily exceed several million dollars, even for someone with a markedly reduced life expectancy. Most doctors in California still have the same $1 million limit for their professional liability insurance that they had in 1975. This means that a doctor who is found to be legally liable for a catastrophic injury to a patient could easily face a potential judgment of several million dollars above their insurance. As such, a doctor could feel the pressure to settle for the $1 million limit, even if they think they did nothing wrong, because of the risk of an over-policy judgment. Also, since California has joint and several liability for economic damages, any hospital could face liability of at least several million dollars, even if their relative liability is small compared to the doctor. These financial and legal facts create a powerful incentive for hospitals and doctors to encourage families to discontinue care when a patient is on life support, which usually means that they are breathing with a mechanical ventilator.

When that mechanical ventilator is discontinued before the patient has sufficiently recovered their neuro-respiratory drive, the patient usually dies. Discussions about the withdrawal of life support usually occur in the context of some unexpected deterioration in the patient’s condition. While the family of an adult patient must deal with considerations about what the patient would want, many such discussions focus on the quality of life and other medical conditions that may have pre-existed the hospitalization. Oftentimes the family will consider the prior quality of life and the effect on the family of a prolonged life in a state of unresponsiveness. However, the case of a child who enters the world on life support presents a unique situation and a devastating decision for the child’s parents. When parental expectations of a healthy outcome for their child results in the subsequent delivery of a child with severe birth depression who requires ventilatory support and admission to a Neonatal Intensive Care Unit, any family will feel overwhelmed. No one can be prepared to wrestle with the conflicting outcomes of a decision to withdraw life support from a newborn baby. In such a situation, the parents are totally dependent on the honesty and accuracy of the doctor’s recommendations. This is where parents are most vulnerable, and doctors who know the financial consequences of their liability for a lifetime of care can easily manipulate them. But the parents are never aware of this motivation by their child’s doctors.

My office has been involved in three separate cases this year that are examples of this little discussed cover-up by health care providers. One case involves a hospital in the Bay Area where a combination of obstetrical and neonatal negligence during the delivery and aftercare resulted in a child with severe hypoxic-ischemic encephalopathy. After three days on life support with mechanical ventilation, the parents were encouraged to turn off the ventilator. After agonizing for two days, the parents agreed; yet when the machine was actually disconnected, the baby was able to breathe on his own. The doctors then told the parents that their child would have no quality of life and never even recognize them; and the parents were then encouraged to take the baby to a facility for “hospice care.” The parents again agreed. After one week without feeding, a nurse placed a few drops of formula into the infant’s mouth with a syringe and the baby began to feed. The parents then took the child home, and two years later when the case was settled, the child was able to walk with assistance and showed near normal cognitive behavior with fine motor control in his hands. The case was settled for $7.5 million.

The second case involves a hospital and medical group in the Central Valley where a child was delivered with severe hypoxic-ischemic encephalopathy as a result of negligent obstetrical care. The baby was placed on mechanical ventilation and after several days of dire predictions from the doctors and nurses, the parents agreed to turn off the ventilator.

Again, the baby was able to breath on his own. In this case, the medical staff then sent the child home with his parents who were instructed to give the baby liquid morphine whenever the baby cried. The parents could not bring themselves to giving morphine and the baby survived and thrived. Just prior to mediation in the case, the defendant admitted liability for the child’s injuries. The case then settled for $8 million. Had these two babies died, the defendants in each case would face a total liability exposure of $250,000.

The third case involves a large hospital in Los Angeles where a mother entered the hospital at term and the fetal monitor showed a normal healthy fetus. Several hours later, the fetus showed evidence of severe distress on the fetal monitor, but the delivery by csection was delayed for more than an hour because of the unexplained unavailability of an anesthesiologist. When the anesthesiologist did arrive, it took more than 30 minutes to deliver the baby, with the OB taking over 10 minutes from the start of surgery to deliver the baby. After a minimal resuscitation, the obstetrician and the anesthesiologist decided to declare the baby a stillbirth, thus limiting the liability exposure for all defendants to a maximum of $250,000. The fetal monitor strip clearly predicted that the child would suffer from a severe hypoxic-ischemic brain injury if born alive, so the doctors delayed the delivery to be sure that the baby would not survive the birth process. This case is probably the most outrageous since the parents were given no opportunity to participate in a decision regarding their child. It unfortunately represents a far more common scenario in modern medical care in California than the first two cases in which these children’s will to live exceeded the doctors’ attempts to end their lives.

No physician or nurse can ever admit that they consider the financial impact of their medical decisions and they certainly cannot ever admit that their recommendations for the withdrawal of life support have anything to do with the effect of the MICRA limit on noneconomic damages. Such an admission would lead directly to forfeiture of their license and possible criminal charges. But so long as there is a significant financial consequence of liability for a death versus liability for an individual who requires a lifetime of medical care, doctors and hospital executives will continue to “bury their mistakes.”