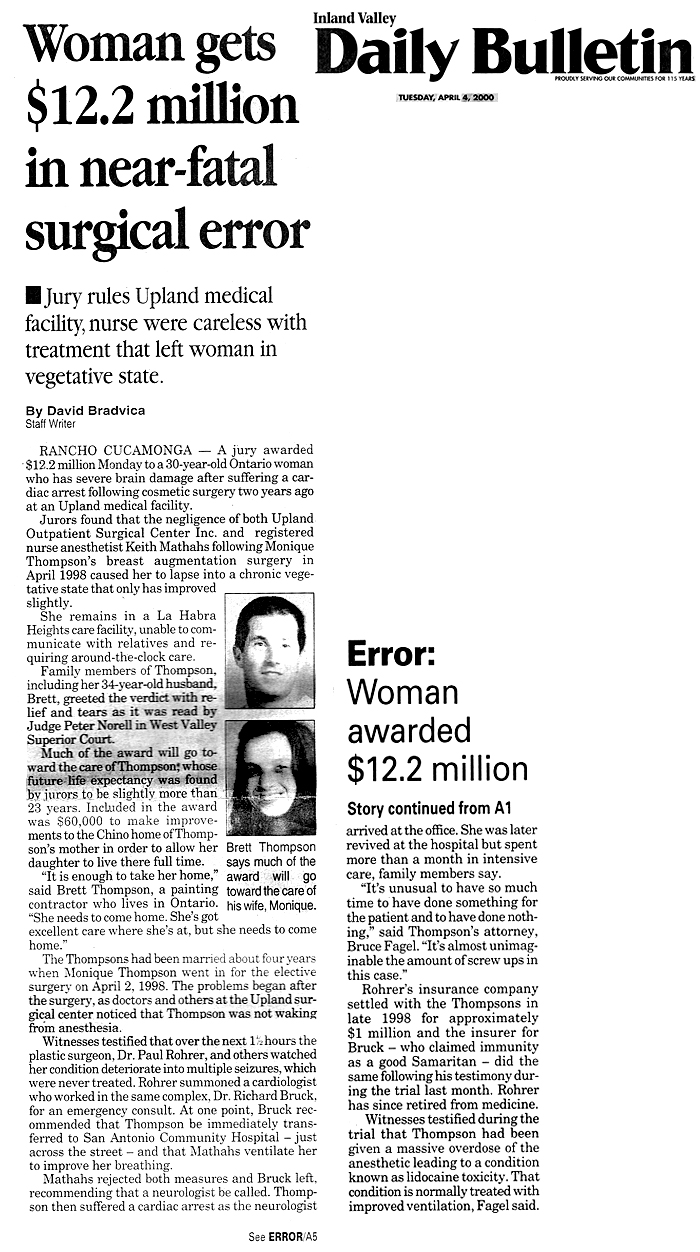 Jurors found that the negligence of both Upland Outpatient Surgical Center Inc. and registered nurse anesthetist Keith Mathahs following Monique Thompson’s breast augmentation surgery in April 1998 caused her to lapse into a chronic vegetative state that only has improved slightly.

She remains in a La Habra Heights care facility, unable to communicate with relatives and requiring around-the-clock care.

Family members of Thompson, including her 34-year-old husband, Brett, greeted the verdict with relief and tears as it was read by Judge Peter Norell in West Valley Superior Court.

Much of the award will go toward the care of Thompson whose future life expectancy was found by jurors to be slightly more than 23 years. Included in the award was $60,000 to make improvements to the Chino home of Thompson’s mother in order to allow her daughter to live there full time.

The Thompsons had been married about four years when Monique Thompson went in for elective surgery on April 2, 1998. The problems began after the surgery, as doctors and others at the Upland surgical center noticed that Thompson was not waking from anesthesia.

Witnesses testified that over the next 1½ hours the plastic surgeon, Dr. Paul Rohrer, and others watched her condition deteriorate into multiple seizures, which were never treated. Rohrer summoned a cardiologist who worked in the same complex, Dr. Richard Bruck, for an emergency consult. At one point, Bruck recommended that Thompson be immediately transferred to San Antonio Community Hospital — just across the street — and that Mathahs ventilate her to improve her breathing.

Mathahs rejected both measures and Bruck left, recommending that a neurologist be called. Thompson then suffered a cardiac arrest as the neurologist arrived at the office. She was later revived at the hospital but spent more than a month in intensive care, family members say.

“It’s unusual to have so much time to have done something for the patient and to have done nothing,” said Thompson’s attorney, Bruce Fagel. “It’s almost unimaginable the amount of screw ups in this case.”

Rohrer’s insurance company settled with the Thompsons in late 1998 for approximately $1 million and the insurer for Bruck — who claimed immunity as a good Samaritan — did the same following his testimony during the trial last month. Rohrer has since retired from medicine.

Witnesses testified during the trial that Thompson had been given a massive overdose of the anesthetic leading to a condition known as lidocaine toxicity. That condition is normally treated with improved ventilation, Fagel said.

[PHOTO NOT SHOWN] caption: Brett Thompson says much of the award will go toward the care of his wife, Monique.