Woman in Coma to get Medical Bills Paid 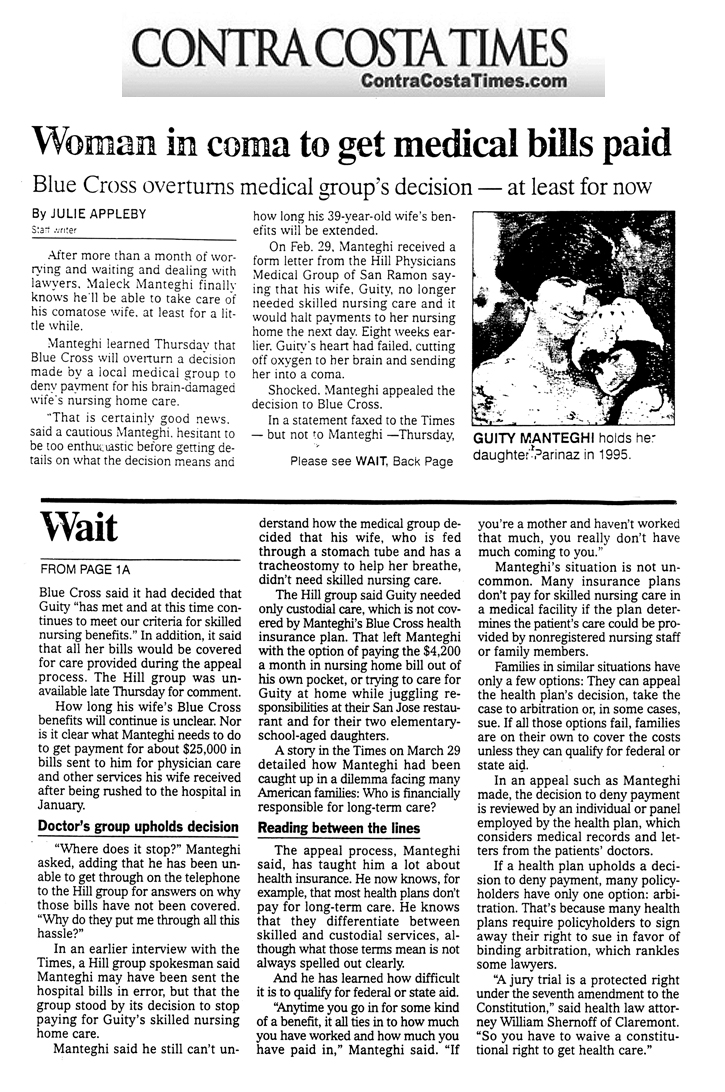 After more than a month of worrying and waiting and dealing with lawyers, Maleck Manteghi finally knows he’ll be able to take care of his comatose wife, at least for a little while.

Manteghi learned Thursday that Blue Cross will overturn a decision made by a local medical group to deny payment for his brain-damaged wife’s nursing home care.

“That is certainly good news,” said a cautious Manteghi, hesitant to be too enthusiastic before getting details on what the decision means and how long his 39-year-old wife’s benefits will be extended.

On Feb. 29, Manteghi received a form letter from the Hills Physicians Medical Group of San Ramon saying that his wife, Guity, no longer needed skilled nursing care and it would halt payments to her nursing home the next day.

Eight weeks earlier, Guity’s heart had failed, cutting off oxygen to her brain and sending her into a coma. Shocked, Manteghi appealed the decision to Blue Cross.

In a statement faxed to the Times — but not to Manteghi — Thursday, Blue Cross said it had decided that Guity “has met and at this time continues to meet our criteria for skilled nursing benefits.”

In addition, it said that all her bills would be covered for care provided during the appeal process. The Hill group was unavailable late Thursday for comment.

How long his wife’s Blue Cross benefits will continue is unclear. Nor is it clear what Manteghi needs to do to get payment for about $25,000 in bills sent to him for physician care and other services his wife received after being rushed to the hospital in January.

“Where does it stop?” Manteghi asked, adding that he has been unable to get through on the telephone to the Hill Group for answers on why those bills have not been covered. “Why do they put me through all this hassle?”

In an earlier interview with the Times, a Hill group spokesman said Manteghi may have been sent the hospital bills in error, but that the group stood by its decision to stop paying for Guity’s skilled nursing home care.

Manteghi said he still can’t understand how the medical group decided that his wife, who is fed through a stomach tube and has a tracheostomy to help her breathe, didn’t need skilled nursing care.

The Hill group said Guity needed only custodial care, which is not covered by Manteghi’s Blue Cross health insurance plan. That left Manteghi with the option of paying the $4,200 a month in nursing home bills out of his own pocket, or trying to care for Guity at home while juggling responsibilities at their San Jose restaurant and for their two elementary-school-aged daughters.

A story in the Times on March 29 detailed how Manteghi had been caught up in a dilemma facing many American families: Who is financially responsible for long-term care?

Reading between the lines:

The appeal process, Manteghi said, has taught him a lot about health insurance. He now knows, for example, that most health plans don’t pay for long-term care. He knows that they differentiate between skilled and custodial services, although what those terms mean is not always spelled out clearly. And he has learned how difficult it is to qualify for federal and state aid.

“Anytime you go in for some kind of a benefit, it all ties in to how much you have worked and how much you have paid in,” Manteghi said. “If you’re a mother and haven’t worked that much, you really don’t have much coming to you.”

Manteghi’s situation is not uncommon. Many insurance plans don’t pay for skilled nursing care in a medical facility if the plan determines the patient’s care could be provided by nonregistered nursing staff or family members.

Families in similar situations have only a few options: They can appeal the health plan’s decision, take the case to arbitration or, in some cases, sue. If all those options fail, families are on their own to cover the costs unless they can qualify for federal or state aid.

In an appeal such as Manteghi made, the decision to deny payment is reviewed by an individual or panel employed by the health plan, which considers medical records and letters from the patients’ doctors.

If a health plan upholds a decision to deny payment, many policyholders have only one option: arbitration. That’s because many health plans require policyholders to sign away their right to sue in favor of binding arbitration, which rankles some lawyers.

“A jury trial is a protected right under the seventh amendment to the Constitution,” said health law attorney William Shernoff of Claremont. “So you have to waive a constitutional right to get health care.”