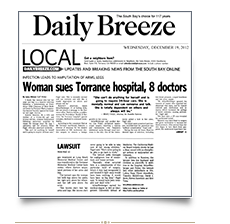 A South Bay woman who lost her arms and legs to a massive infection following a hysterectomy at Providence Little Company of Mary Medical Center in Torrance filed a malpractice lawsuit Tuesday against the hospital and eight doctors.

Annette Ramirez, 48, a wife and mother of a 6-year-old girl and 13-year-old boy, remains hospitalized following numerous surgeries to repair the damage since the Aug. 1 operation, said her attorney, Bruce Fagel, who also practiced medicine.

“She can’t do anything for herself and is going to require 24-hour care,” Fagel said. “She is mentally normal and can converse and talk. She is totally dependent on others and always will be.”

Ramirez’s physician, James Scharffenberger, 57, of Rolling Hills, did not return a message to his Torrance office. Patricia Aidem, a spokeswoman for Providence Health & Services, the Torrance hospital’s parent company, declined to comment immediately.

According to the complaint filed at the Torrance courthouse, Ramirez, a director of reunions for the Alumni Association at USC, underwent elective surgery to remove a benign growth on her uterus.

Scharffenberger and another doctor, Lisa Fisher, performed laparoscopic surgery, inserting a camera and instruments into Ramirez’s abdominal cavity through small incisions in the skin. One of the instruments poked a hole in her colon, Fagel said.

The injury went unnoticed and doctors recorded that the procedure was “without complication,” Fagel said.

During the next 40 hours, Ramirez showed signs of infection, including low blood pressure, a rapid heartbeat and low urine output.

“Dr. Scharffenberger ignored the concern of nurses who reported her abnormal vital signs, and he instead ordered pain medication and an enema, which increased the spillage of bowel contents, causing peritonitis,” Fagel said.

Ramirez was taken back to surgery and given medication to increase her blood pressure. After several days, her skin began to turn black from gangrene. She underwent hyperbaric oxygen treatment at Long Beach Memorial Medical Center and was transferred to the Torrance Memorial Medical Center burn center, where doctors amputated portions of her arms and legs.

The lawsuit says the woman lost both legs above the ankle, her right arm above her elbow, and her left arm above the wrist.

The lawsuit seeks damages for negligence, loss of consortium and home services.

Scharffenberger earned his medical degree in 1981 at Georgetown University School of Medicine. The California Medical Board website shows he has a clean record with no disciplinary actions or malpractice settlements.